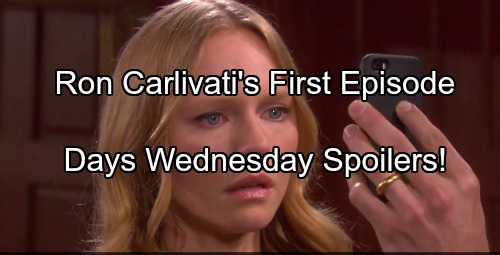 Days of Our Lives (DOOL) spoilers for Wednesday, July 19, tease that Abigail (Marci Miller) will confront Dario (Jordi Vilasuso) with all the evidence against him. She’ll insist that Dario needs to stop his shady schemes or else there will be severe consequences. Abigail won’t tolerate this kind of behavior from her husband, especially since he’s part of Thomas’ life now.

Dario will refuse to let any of his moneymaking strategies go. When Abigail pushes back, Dario will suggest she’s not the only one with leverage. Days spoilers say Dario will show Abigail a picture on his cell phone. She’ll be stunned to see a photo of Chad (Billy Flynn) standing over Deimos’ (Vincent Irizarry) dead body.

Dario will contend that they’re going to keep the status quo unless Abigail wants Chad to land in prison. Days of Our Lives spoilers hint that things will get tricky once Dario is arrested later this week. Abigail will scramble to hide any proof against Chad and prevent this situation from spiraling out of control.

In the meantime, Anjelica (Morgan Fairchild) will have a chat with her accomplice. She greeted “Dr. Evans” when she returned to her office, but is she right about that? This is likely Hattie (Deidre Hall), not Marlena (Deidre Hall). Even if it happens to be the good doc, Hattie will definitely show up on Wednesday. DOOL spoilers say we’ll learn the reason for this partnership and their plan will press on.

Elsewhere, Adrienne’s (Judi Evans) joy will turn to despair. She just got great news about the loan for The Spectator, but she can’t ignore her son’s drama. Sonny (Freddie Smith) is still behind bars and there’s nothing Adrienne can do about it. 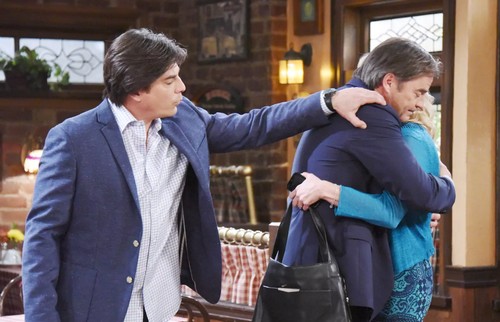 Justin (Wally Kurth) will console his ex as she deals with all the heartbreak. Unfortunately, Lucas (Bryan Dattilo) won’t appreciate the warm moment. Days of Our Lives spoilers reveal that Lucas will blast Justin for making a move on Adrienne. He’ll do whatever he can to protect his relationship.

Paul (Christopher Sean) will also ask John (Drake Hogestyn) for some help on Wednesday. They’ll work together in hopes of clearing Sonny’s name. It looks like some major clues will emerge soon.

Days viewers are certainly looking forward to this episode, which will mark the debut of Ron Carlivati’s material. DOOL’s new head writer has big plans for Salem! We’ll give you updates as other details come in. Stay tuned to the NBC soap and don’t forget to check CDL often for the latest Days of Our Lives spoilers, updates and news.