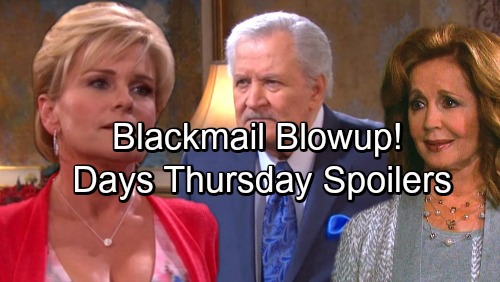 Days of Our Lives (DOOL) spoilers for Thursday, October 12, tease that Kate (Lauren Koslow) will give Roman (Josh Taylor) and Marlena (Deidre Hall) a shock. It looks like John (Drake Hogestyn) will eventually join them for this news as well. Kate managed to get some stunning info out of Clyde (James Read) and now it’s time to spill it.

Clyde revealed that a “sincere inmate” told him Will (Chandler Massey) was still alive. Kate admitted it was someone they all knew, but she hasn’t offered any other hints just yet. Days spoilers say Kate will finally provide the name in Thursday’s DOOL episode. The identity of this convict could give Ben’s (Robert Scott Wilson) claims a big boost in credibility.

Days of Our Lives spoilers indicate that Dr. Rolf (William Utay) is headed back to the NBC soap. Could the DiMeras’ sinister doc be the inmate Clyde talked to? That’s certainly a possibility to consider. Whatever the case, Kate will divulge what she knows soon! 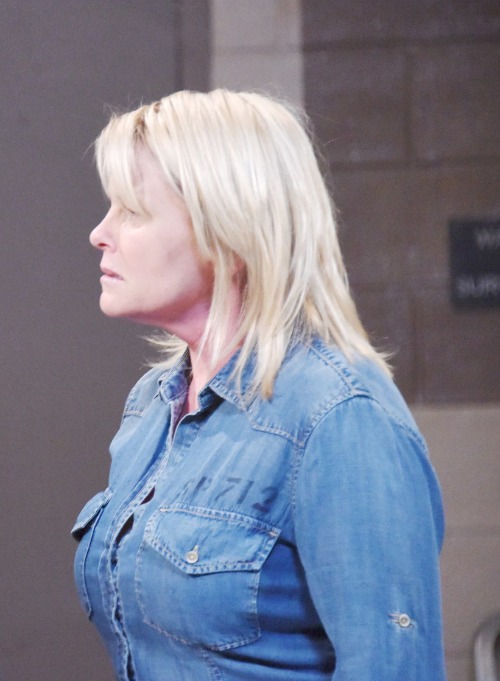 Elsewhere, Bonnie (Judi Evans) will drop a bomb on Victor (John Aniston). She’ll explain that she overheard Victor’s incriminating conversation with Xander (Paul Telfer). Bonnie will give Victor the terms of her blackmail and hope that he won’t put up a fight. She’ll let him know that he’ll have to leave Maggie (Suzanne Rogers) ASAP.

Once they’re divorced, Bonnie expects Victor to marry her instead. She’ll insist that this is non-negotiable, but that won’t stop Victor from resisting. Nevertheless, it sounds like Victor will have to get on board. Bonnie’s day of reckoning is coming, but Victor will have to suffer a little in the meantime.

Across town, Maggie will open up to Julie (Susan Seaforth Hayes). Days of Our Lives spoilers say Maggie will talk about “Adrienne’s” bizarre behavior and the possible reasons for it. She’ll have major concerns, so Julie will chime in with her thoughts on the matter.

Julie will also face off with Chloe (Nadia Bjorlin) on Thursday. Chloe won’t be happy about all the unilateral decisions Julie’s been making. She’ll think she deserves some input at the club and she’s not backing down until she gets it. We’ll give you updates as other Days details emerge. Stay tuned to DOOL and don’t forget to check CDL often for the latest Days of Our Lives spoilers, updates and news.