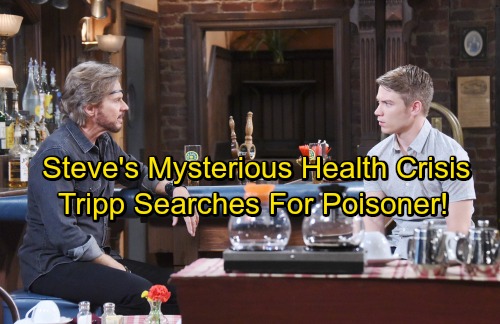 Days of Our Lives (DOOL) spoilers tease that Steve (Stephen Nichols) will face some difficulties in the coming weeks. Headaches and blurry vision will become a daily battle. Steve will try to ignore these frightening episodes, but they’ll get worse and worse. He’ll fear he could lose his eyesight entirely if this keeps up.

Kayla (Mary Beth Evans) and Tripp (Lucas Adams) will undoubtedly notice changes in Steve’s behavior. It may take a while to make Steve admit what’s wrong, but he should come clean eventually. Days of Our Lives spoilers say Kayla will be terrified for her husband. She’ll feel like their family is always dealing with a major crisis.

Kayla would love to have some peace for once, but that’s never going to happen in Salem. The best Kayla can hope for is solving the mystery of Steve’s illness and steadying herself for whatever comes next. Unfortunately, cracking the case won’t be easy. Days spoilers reveal that Steve will be poisoned, but the culprit will do everything in his or her power to avoid detection.

Once Steve realizes his problems aren’t caused by a medical condition, at least he’ll be on the right track. Since Steve will be struggling with serious symptoms, maybe Tripp can step up for his dad. Tripp’s been making progress with Kayla, but he’s still got some work to do. He needs a grand gesture to make up for targeting Kayla at the hospital and holding her at knifepoint.

Will Tripp be instrumental in finding the poisoner? If Tripp digs around and comes up with proof against someone, he would earn Kayla’s deep gratitude. Of course, Tripp would also solve Steve’s issues and bring an evildoer to justice.

Even if John (Drake Hogestyn) and Paul (Christopher Sean) pitch in, Tripp should be a key player as this DOOL mystery unravels. He may emerge as a hero and cement his spot in the Johnson family. As for the culprit, Days spoilers say he or she will be a big surprise. The person poisoning Steve will be one of the last people anyone would expect.

Days of Our Lives will deliver some clues once this storyline kicks off, so the puzzle will slowly come together. We’ll give you updates as other DOOL news comes in. Stay tuned to the NBC soap and don’t forget to check CDL often for the latest Days of Our Lives spoilers, updates and news.