Days of Our Lives Spoilers: Week of November 27 – Bo’s Memory Haunts Hope, Rope Wedding Off – Sami and Rafe Hook Up 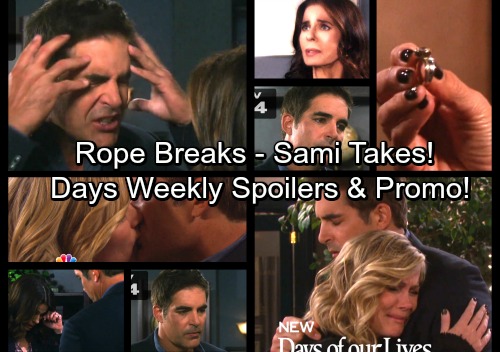 Days of Our Lives (DOOL) spoilers for the week of November 21-December 1 tease that a split is looming for Hope (Kristian Alfonso) and Rafe (Galen Gering). Conflict has slowly driven them apart, but the next couple blows will really seal the deal. For starters, Rafe will take Hope’s job!

When Abe (James Reynolds) calls for JJ’s (Casey Moss) firing, Hope will refuse to do it. Rafe will try to resolve the situation, but he’ll eventually leap at the chance to take over as Salem’s police commissioner. Days of Our Lives spoilers state that Hope will be furious over Rafe’s decision. She’ll confront him about plunging the knife in her back.

Rafe will have a few things to get off his chest, too. He’ll remind Hope that that she constantly drags her feet on their wedding plans. Rafe will push Hope to admit the real reason she doesn’t want to marry him.

Hope will contend that it has nothing to do with Rafe, but he’ll only get more riled. Rafe will shout that Hope should have the guts to say it to his face. He’ll believe he knows exactly why Hope doesn’t want to tie the knot. Rafe will yell that it’s because he’ll never be Bo (Peter Reckell).

Hope won’t appreciate Rafe’s attitude and total lack of respect for the dead. She’ll fire back that NO ONE will ever be Bo. Days fans know that Bo was the love of Hope’s life, so Rafe needs to accept that or move on. Hope would certainly still be with Bo right now if he were still alive.

After Hope hands over her engagement ring, Rafe will mull over his heartache. Days spoilers say he’ll run into Sami (Alison Sweeney), who’ll be equally distraught. After facing Will’s (Chandler Massey) wrath, Sami will break down in Rafe’s arms. She’ll be upset about Will’s disdain for her as well as some failed memory-jogging strategies.

DOOL fans can see where this is headed! Days of Our Lives spoilers reveal that Rafe and Sami will cling to each other in their time of need. Kisses will quickly lead to an evening of passion. These exes will have sex, so “Safe” fans should be thrilled.

It looks like some great episodes are coming up. We’ll give you updates as other DOOL news emerges. Stay tuned to the NBC soap and don’t forget to check CDL often for the latest Days of Our Lives spoilers, updates and news.