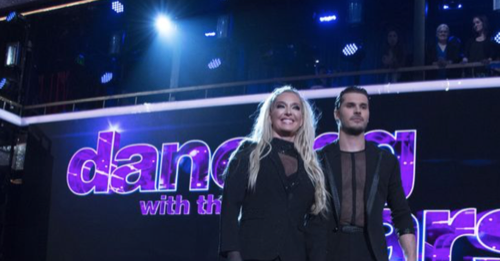 Tonight on ABC The Disney spirit shines in the ballroom as Dancing With The Stars returns for the fifth episode of season 24 and it is Disney Night. American singer, actress and television personality Erika Jayne and her professional dancer Gleb Savchenko took the DWTS stage and danced the Viennese Waltz to “Unforgettable” by Sia from “Finding Dory.”

Judge’s comments on Erika Jayne’s DWTS Season 24 episode 5 Stars Viennese Waltz: Julianne: You are so powerful and so strong and that’s why women love you. Tonight you showed a vulnerability, which inspires them. Bruno: My darling, I think I saw you for the first time tonight, the woman behind the mask! You had a wonderful flow of movement. Carrie Ann: There was something very profound that happened, and I saw you open up. Forget Princesses, you were a Queen.  Len: I’ve said it many times, you’re a lovely dancer and it just didn’t come out. Tonight it did!

Watch the video below and let us know what you think, do you agree with the judge’s comments? Do you think Erika did enough to avoid elimination tomorrow? Make sure to head over and check out all our DWTS recaps, spoilers, news & more, right here.