Game of Thrones Season 8 Spoilers – Is Tormund Dead, Or Will He Reunite With Brienne Of Tarth? 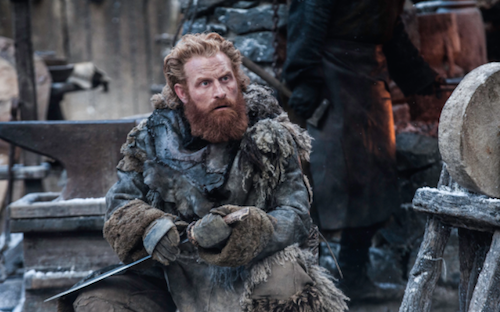 Game of Thrones fans are awash in fear and worry after the season 7 finale, especially after watching our favorite redhead Tormund (Kristofer Hivju) possibly meet his death, leading all our shipping dreams of Tormund and Brienne of Tarth (Gwendoline Christie) reuniting, falling in love, and having giant babies in Season 8 meet an icy blue and fiery end.

However, after getting over our panicked reactions and rewinding the footage a few dozen times, we realized that no, Tormund and Beric Dondarrion (Richard Dormer) were actually on the part of the wall that did NOT come crashing down after Undead Viserion blew it up (burned it down?). Instead of running down the stairs in panic like several other Night’s Watch members, they instead ran on top of the wall in panic.

However, if you look closely – and by closely, I mean if you freeze the frame every other second during the last episode – you’ll be able to notice that both Tormund and Beric make it to the ‘safe’ part of the wall, and then proceed to watch in horror as Viserion burns down (freezes down?) the part of Eastwatch-by-the-Sea’s wall that is adjacent to the ocean.

Alas, there is also simply no way that Game of Thrones would kill off two major characters in an off-screen and ambiguous death, where they were simply collateral damage in Viserion and the Night King’s carnage. Instead, it’s much likelier that after the White Walker army makes it past the wall and continues its merry way into Westeros (finally) at the beginning of Season 8, Beric and Tormund will run to Castle Black to warn the other members of the Night’s Watch about the undead ice zombies.

Given that Winterfell is running distance from Castle Black (as we saw in the very first episode of Game of Thrones all the way back in 2011), it’s easy to assume that the Night’s Watch, along with Tormund and Beric, will then make their way over to Winterfell, and team up with (most of) our show’s main characters in an epic last stand against the White Walker army, the Night King, his minions, and Undead Viserion. 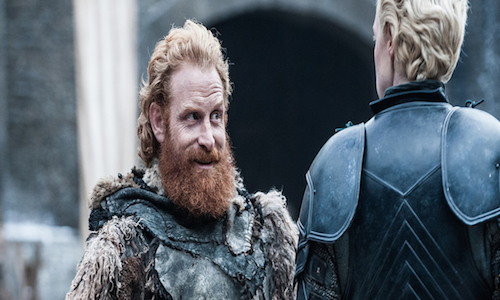 There’s no telling whether Tormund will die then, but we can say with confidence that he probably won’t die before he reunites with Brienne of Tarth at Winterfell in Season 8, and hopefully she’s feeling kinder towards him than she has expressed in the past – or poor Tormund’s heart will break when he realizes that all those monster babies he dreamed of will never come to pass.

What do you guys think? Is Tormund dead, or will we see him in Season 8? And if we do, do you think he and Brienne will finally have the romance that he’s been waiting for, or will Brienne rebuff his advances to continue her strange love/hate/nah-we’re-just-bros relationship with Jaime Lannister (who finally had the guts to leave his sister lover behind). Let us know your thoughts about Game of Thrones’ Season 8 in the comments below.