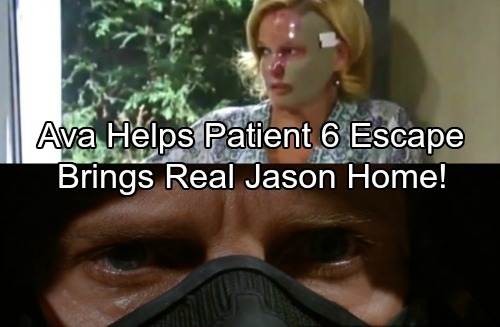 General Hospital (GH) spoilers tease that Ava (Maura West) will continue to be a rebel at the clinic. She’s certainly interested in learning more about Patient Six and what makes him tick. The staff is discouraging Ava’s contact with this guy, but they’re only fanning the flames of Ava’s curiosity.

Of course, that might be the goal Valentin (James Patrick Stuart) has in mind. It’s tough to say what kind of ruse the sneaky Cassadine has cooked up. Whatever the case, Patient Six’s identity should affect Ava’s storyline in a big way. Steve Burton’s (ex-Jason) character could lead Ava down a very different path.

If Patient Six can somehow avoid being sedated for a while, he might be able to give Ava a message. Burton’s character could explain that Ava’s been lied to and this place isn’t what it seems. He may indicate that he’s been held there against his will for years.

Will Ava be the one to help Burton’s character escape and get back to Port Charles? Griffin (Matt Cohen), Anna (Finola Hughes) and Finn (Michael Easton) will undoubtedly be involved in the clinic drama, but Ava may set everything in motion. She could try to get her phone back and send an SOS to Griffin.

General Hospital spoilers hint that Ava will face some tough choices in the weeks ahead. She might even give up her shot at facial reconstructive surgery if it means helping a man in need. This is Ava’s opportunity to show she can be selfless. Ava could definitely use a good dose of redemption after everything she’s done.

GH will fix Ava’s face sooner or later, but that doesn’t mean we won’t see a delay. Perhaps Ava has a little more work to do before she gets her life back. Ava’s connection to Burton’s return will spark some interesting fallout. Once someone with Jason’s old appearance arrives, Sonny (Maurice Benard) and Carly (Laura Wright) are in for a real shock. 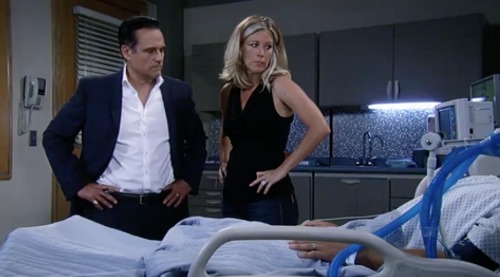 It’ll take months to completely solve the mystery, but it seems likely that Burton will be revealed as the true Jason Morgan. If so, Sonny and Carly will have a lot to be grateful for. This won’t undo Morgan’s (Bryan Craig) death, but it might go a long way toward easing the tension with Ava.

Burton’s Jason may consider Ava a friend after receiving her help. He could push Carly and Sonny toward forgiveness. Ava is never going to be their favorite person, but this could still be a nice redemption arc for her.

It could also set up a potential pairing! Who knows? Steve Burton and Maura West might have some hot chemistry. We’ll give you updates as other General Hospital news comes in. Stay tuned to ABC’s GH and don’t forget to check CDL often for the latest General Hospital spoilers, updates and news.