General Hospital Spoilers: GH Fall Preview – Check Out The Scoop On All The Hot Drama Coming To Port Charles 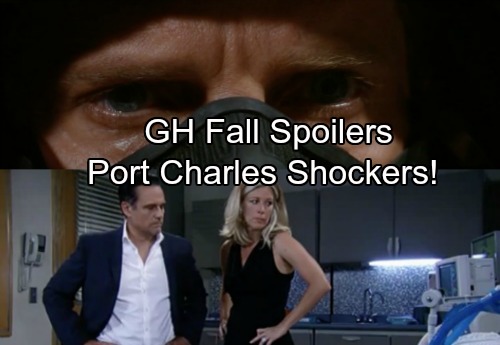 General Hospital (GH) spoilers tease that the months ahead will bring plenty of action, romance and drama. We’ve got a fall preview that’s loaded with fun surprises. You won’t want to miss any of these hot storylines as autumn gets underway.

For starters, Alexis (Nancy Lee Grahn) will wonder if she can ever find love again. She’ll give dating a shot, but we all know she’d rather have Julian (William deVry). Thankfully, Julian will pop back up by the time November sweeps rolls around. There’s a good chance this couple will make it work sooner or later.

Other General Hospital spoilers state that Kiki (Hayley Erin) and Dillon’s (Robert Palmer Watkins) relationship will start to come apart. He’ll feel like she’s shutting him out of her life. Kiki is committed to earning her medical degree, but that could mean making a huge sacrifice. If Dillon realizes there’s just no time for him anymore, he may pursue other options.

Meanwhile, Kristina (Lexi Ainsworth) will have to face her feelings. She’ll make a decision about whether to pursue a future with Parker (Ashley Jones). Griffin (Matt Cohen) will have his own future on his mind. As his concern for Ava (Maura West) grows, so will his feelings.

Ava will struggle as well. She’ll have vivid dreams about Griffin, so we’ll see if her fantasies can become a reality. Elsewhere, Anna (Finola Hughes) and Finn (Michael Easton) will track down Cassandra. Will they get the info they need? Valentin (James Patrick Stuart) will certainly be tangled up in any shockers they learn.

Franco (Roger Howarth) and Liz (Rebecca Herbst) will tackle some issues once his secrets are revealed. Fortunately, this couple is on pretty solid ground. They can most likely withstand an obstacle or two. In fact, Liz and Franco could come out of this stronger than ever.

Of course, we have to talk about GH’s biggest fall plot. Steve Burton’s (ex-Jason) comeback will turn many lives upside down. He’s the man known to Ava as Patient Six, but problems will emerge after he’s unmasked on the September 19 GH episode. Since Burton’s character will have to get out of the clinic somehow, a rescue or an escape are his only options.

It looks like Billy Miller (Jason) will get back in the mix this October, so we should get some Jason vs. Jason moments eventually. They’ll have to figure out what the real story is. Sam (Kelly Monaco) will definitely have a mess to cope with. We could see some cracks in her sanity.

Sonny (Maurice Benard) and Carly (Laura Wright) will be involved in the Jason ordeal, but they’ll also have their hands full with Josslyn (Eden McCoy). As details about Oscar’s (Garren Stitt) past come to light, there’s sure to be trouble. Oscar has been hiding a few bombshells.

General Hospital spoilers say Nelle (Chloe Lanier) and Michael (Chad Duell) will have a battle on their hands. Carly and Bobbie (Jacklyn Zeman) just won’t back down. Michael will take huge steps forward anyway, but Nelle will start to get nervous. Has she told Michael everything she should?

Things will continue to be complicated in Port Charles this fall. We’ll give you updates as other GH news comes in. Stay tuned to the ABC soap and don’t forget to check CDL often for the latest General Hospital spoilers, updates and news.