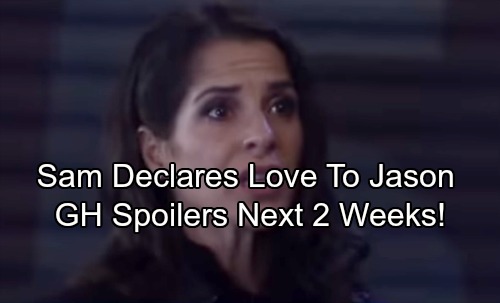 General Hospital (GH) spoilers for the next two weeks tease that love will be complicated as usual. The week of December 18-22 will bring some difficult moments for Drew (Billy Miller), Jason (Steve Burton) and Sam (Kelly Monaco). They’ll get some sympathy from people who care about them, but they won’t find a real solution to their problem. Sam has feelings for two men and that’s that.

GH fans will watch Drew will battle his insecurities again. The fact that he’s not legally married to Sam will really bother him. Drew will share what he’s dealing with and ponder Sam’s love for Jason. He may question her about where her heart lies. Sam will have a bit of a meltdown, but she’ll eventually get her act together. She’ll promise Drew that they’re still in this for better or worse.

Later, Sam will get a shock. Will Drew get down on one knee and propose? He’ll want Sam to become his lawful wife, so he might as well get started on that plan. Meanwhile, someone will send Franco (Roger Howarth) a puzzling note. This could be a veiled threat of some sort, so Franco will definitely stay on guard.

Other General Hospital spoilers say Michael’s (Chad Duell) emotions will get the best of him. Nelle’s supposed to be the hormonal one right now, but Michael could be the soon-to-be parent with the most mood swings. He was furious with Nelle during their last chat, but it looks like he’ll soften in the week ahead. Michael will make a passionate speech as he works to put his kid first.

The week of December 25-29 will bring fierce determination for Lulu (Emme Rylan). Despite the risks of moving forward with her hot scoop, Lulu will feel like she has to take action. She’ll do whatever she can to expose the rigged mayoral election of 2014. It appears she’ll quickly make progress. Lulu will end the week on a hopeful note, so good news is headed her way. 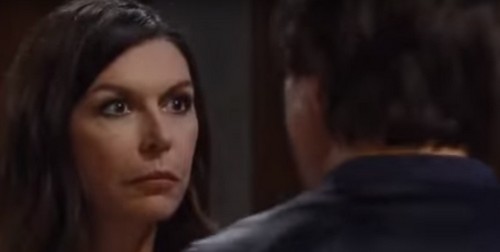 Across town, General Hospital spoilers say Anna (Finola Hughes) will have some advice for Finn (Michael Easton). Since he insists on taking down Cassandra (Jessica Tuck), Finn could use a crash course in self-defense. Anna may give Finn a few tips and grow closer to him in the process.

Elsewhere, Sam will bump into Jason again. Every time she sees him, she’s just a little more torn. GH spoilers hint that we could see a powerful confession. It sounds like Sam will declare her love for Jason, but she may not be ready to bail on Drew just yet. This love triangle is just getting started!

The next two weeks will pack in plenty of drama, so stay tuned. We’ll give you updates as other GH details emerge. Stick with the ABC soap and don’t forget to check CDL often for the latest General Hospital spoilers, updates and news.