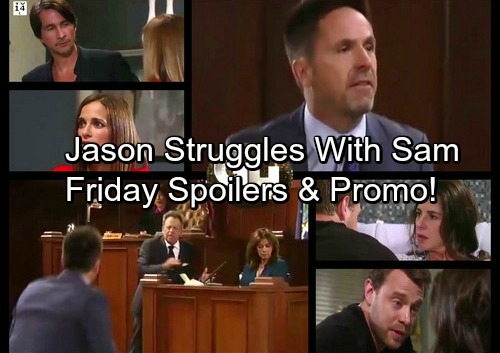 General Hospital (GH) spoilers for Friday, August 11, tease that Finn (Michael Easton) will try to get to the bottom of Hayden’s (Rebecca Budig) odd behavior. Her exit storyline is winding down and she’s definitely stirring up suspicions. Finn just heard Hayden call herself Rachel Berlin on the phone and he’ll want to know why.

Hayden will stammer out a story, but Finn will feel like something’s off here. It’s clear that lies are tearing this relationship apart. Meanwhile, Jason (Billy Miller) will do whatever he can to calm Sam (Kelly Monaco) down. She’ll want to turn herself in for shooting Sonny (Maurice Benard), but Jason will think they need to let this go.

Sam will seem upset as Jason explains the situation. He’ll contend that they need to focus on Sam’s recovery, not potential charges. Jason will believe this is the best solution, but Sam won’t look certain that it’s the right move.

At the police station, Dante (Dominic Zamprogna) will mull over who shot his father. Nathan (Ryan Paevey) will suggest that they’re facing pressure to close the case, but Dante just won’t want to give up his quest for answers. He’ll continue to dig around over the next few episodes and that should lead to some surprising revelations.

Other General Hospital spoilers say Carly (Laura Wright) and Sonny will have an important conversation. She’s been patient about his attempt to get out of the mob, but this incident has obviously left her rattled. Since Sonny is protecting Sam, Carly may feel like he’s holding out on her. She’s grown weary from all the deception and danger in her marriage.

When Carly insists that she’s ready for a change, Sonny will promise that it’s going to happen. He’ll believe this is a new beginning for them, but Carly won’t be so sure. They’ll debate the issue and search for a way to move forward. Despite the drama that comes with being married to Sonny, Carly can’t live without him. She’ll just have to cope with the obstacles they encounter.

In the courtroom, GH fans can expect even more tension. Alexis (Nancy Lee Grahn) was forced to make some difficult statements on the stand. However, Scott (Kin Shriner) will hope that he can turn things around. He’ll try to manipulate Alexis into helping Julian (William deVry) out of this jam.

Unfortunately, Scott will push a little too hard. Julian will eventually decide he can’t take it anymore. He’ll leap to his feet and declare that it’s enough. Julian doesn’t want to cause additional pain for the woman he loves.