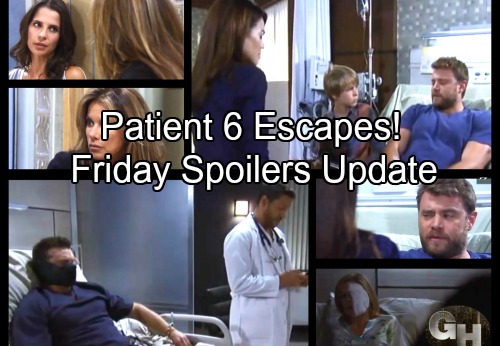 General Hospital (GH) spoilers update for Friday, September 29, tease that the clinic staff will be fed up with Patient Six (Steve Burton). This guy certainly hasn’t made their jobs easy lately. Dr. Klein will insist that Patient Six is more trouble than he’s worth. He’ll think the person who’s set to pick him up is in for a rough time.

Of course, Patient Six intends to get out of there before the transfer takes place. He just needs a little help from Ava (Maura West) to make it happen. Ava will indeed pitch in with Burton’s escape soon, but she’ll focus on a fantasy first.

In Ava’s room, she’ll call out to someone in the doorway. It looks like this may be a dream version of Griffin. He’ll offer Ava advice and possibly some comfort. Ava might imagine getting out of there with the hunky doc.

Back in Port Charles, the real Griffin will bring Franco (Roger Howarth) in the loop. He’ll reveal that Ava might be in danger. They’ll mull over the threat to Ava’s life while Jason (Billy Miller) faces some confusion. After Jake (Hudson West) mentions Franco’s old picture, Jason will want to hear a few more details.

General Hospital spoilers say Liz (Rebecca Herbst) will explain the situation. She’ll indicate that Franco was photographed next to a kid who resembled Jason as a boy. Liz will act like it’s no big deal, but that’s because she doesn’t know the truth. Franco decided to leave Liz in the dark on Jason’s twin, Drew.

Liz, Jason and Sam (Kelly Monaco) will all find out sooner or later, but they’ll have other issues to worry about for now. For example, Sam will be concerned about Alexis’ (Nancy Lee Grahan) obsession with Julian (William deVry). She’ll feel like her mom is still hung up on her complicated ex.

Alexis will probably argue that she’s moved on, but GH fans can’t buy that. Forgetting about Julian is an impossible task. Elsewhere, Dillon’s (Robert Palmer Watkins) attitude will irritate Kiki (Haley Erin). As she talks about work and Dr. Bensch (James DePaiva), Kiki will pick up on Dillon’s apparent jealousy.

Regardless, GH viewers can expect some warm moments. Kristina is falling for Parker again and that’s sure to cause plenty of drama. We’ll keep you posted as other details emerge. Stay tuned to the ABC soap and don’t forget to check CDL often for the latest General Hospital spoilers, updates and news.