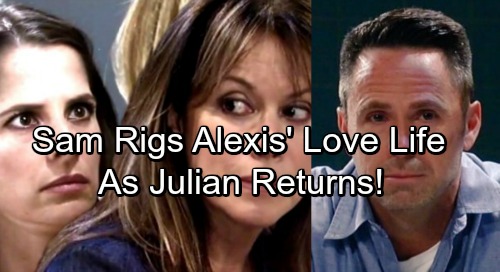 General Hospital (GH) spoilers tease that Alexis (Nancy Lee Grahn) has some tough moments in her future. She’ll receive some news that devastates her on October 10. Could this be about Julian’s (William deVry) appeal or something else? Regardless, Alexis just won’t be in a good frame of mind.

It looks like Dr. Bensch (James DePaiva) will be nearby when Alexis’ crisis hits. He’ll sense that she could use some support, so he’ll probably offer a shoulder to cry on. General Hospital spoilers hint that Alexis will appreciate Dr. Bensch’s kindness, but she’ll believe she needs to tackle her problems alone.

GH viewers know Alexis is a very independent woman. She doesn’t like to rely on others, even when things get bleak. Nevertheless, Sam (Kelly Monaco) will think this is a golden opportunity. She’ll do some matchmaking in hopes of helping her mom find love again.

Perhaps Sam will urge Dr. Bensch to ask Alexis out on a date. Once the invitation is given, Alexis will probably hate to say no. However, Alexis won’t mind letting Sam know how she really feels. General Hospital spoilers say Alexis will hit the roof over her daughter’s meddling. She’ll suggest that Sam should stop playing Cupid and focus on her own love life. 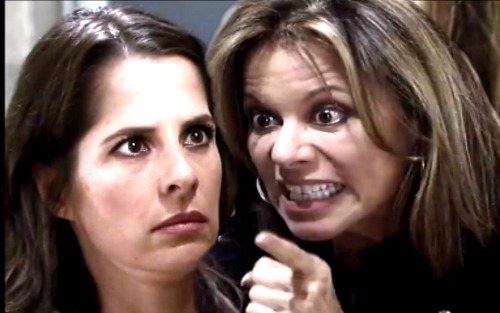 Alexis’ outrage gives us an idea of how much pain she’s dealing with. It’s clear that Julian’s prison stint is weighing on her. Alexis can’t be with her true love and that’s killing her inside. Still, as CDL told you weeks ago, Dr. Bensch will end up providing a bit of a distraction. Alexis will eventually give dating a shot, but it seems doubtful that Dr. Bensch will be the man of her dreams. He’s an OK guy, but he’s not Julian!

Of course, Julian is headed back to the ABC soap for November sweeps. GH spoilers suggest that they’ll slowly build up to a “Julexis” reunion. Once Julian is released from the state pen, he may feel like he’s not what Alexis needs. Julian is undoubtedly mulling over all his mistakes right now. By the time he returns, he could be even more convinced that Alexis is better off without him.

Dr. Bensch’s interest could spark some jealousy, but he obviously isn’t real competition. It shouldn’t take long for Alexis to run back into Julian’s arms. General Hospital fans won’t want to miss the next chapter of this complicated love story. We’ll give you updates as other details emerge. Stay tuned to ABC’s GH and don’t forget to check CDL often for the latest General Hospital spoilers, updates and news.