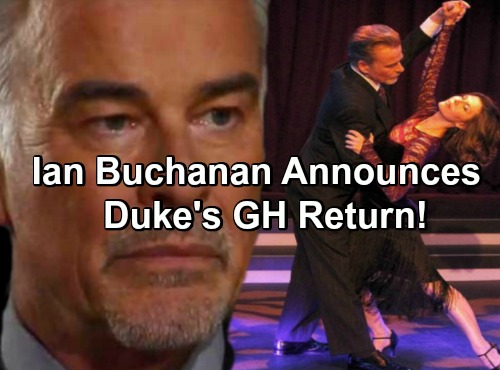 General Hospital spoilers suggest that on the GH new episode of Wednesday, March 8, Duke Lavery (Ian Buchanan) is going to shockingly return to Port Charles after supposedly dying in the arms of the woman he loved, Anna Devane (Finola Hughes). Ian Buchanan made the announcement in a recorded video GH fans can view below!

Ever since we discovered Olivia “Liv” Jerome (Tonja Walker) snuck back into Port Charles causing a chain reaction of disasters, ruining many people’s lives; it seems that her obsession with Duke Lavery is what will truly prove how delusional she really is. She has carried some of his hair with her for over 25 years, in hopes of reuniting with the man she desired. 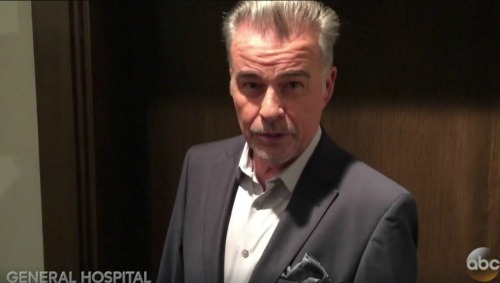 Underneath General Hospital Liv gave Dr. Griffin Munro (Matt Cohen) a potion that would remove all his memories and sort of kill his whole soul to make room for the soul of his father, Duke. Ian Buchanan, who portrayed fan favorite Duke teased fans, by telling them to tune in to ABC’s General Hospital on Wednesday, March 8, 2017 because you never know who is going to show up.

General Hospital spoilers indicate that it is entirely possible that Liv has completely lost her mind and Griffin will appear to her as Duke. GH viewers saw in spoilers that Liv tells her “love” that Anna Devane (Finola Hughes) must die; but it is clear to viewers she is talking to Griffin, but in her mind, is Duke really back from the dead?

In order to see how this all plays out, fans must follow Ian Buchanan’s advice and tune into ABC’s General Hospital on Wednesday, March 8, 2017 to watch how this whole story plays out. Check CDL General Hospital spoilers for updates and news!