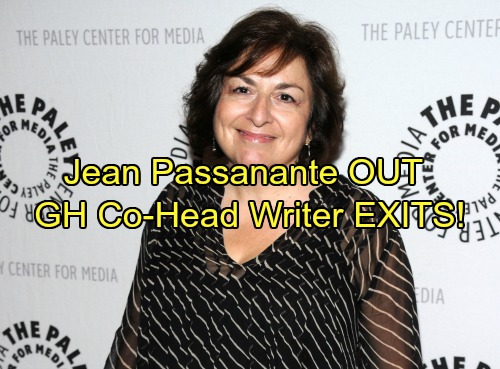 General Hospital (GH) spoilers and news indicates that the current Co-Head Writer Jean Passanante, who is known to so many fans as an experienced scribe of soaps, has made a shocking and abrupt decision to part ways with General Hospital. This decision was made official early Tuesday morning, June 6, as a message was posted on her Facebook page stating that she opted not to continue with General Hospital as Co-Head Writer. Of course it more likely Jean Passanante was fired, or asked to leave, due to poor ratings but TPTB allowed her to exit gracefully.

Jean Passanante claimed that she was not being fired from General Hospital, but that this was a mutual pronouncement to retire on her end. During Passanante’s calling, Jean has been head writer and co-head writer for not just her current soap – General Hospital but also for the now canceled soap opera All My Children, One Life to Live, As the World Turns, Young and Restless as well as Another World. Passanante has earned plentiful Daytime Emmy Awards for her work on all soaps in which she has been linked with.

In her Facebook declaration Jean Passanante detailed to her fans that “Friends, soon I’ll have more time for pie-baking because I’ve decided not to renew my contract with GENERAL HOSPITAL. I’ll retire from soap-writing in August. The irony is that Con Ed must replace a gas pipe, and they show no signs of doing that in the foreseeable future. So we have no oven. It’s like the Twilight Zone episode in which all Burgess Meredith wants is to read, and after a nuke drops on his town, he finds himself among the ruins of the library with all the books he can possibly read at his fingertips. And then he breaks his glasses.”

Jean Passanante had reached the point on General Hospital where she was attacking fans on social media and this clearly meant it was time to go. Now she can appreciate her retirement and GH can move forward. Her previous work on many of our beloved daytime soaps was well respected but Passanante’s work on GH was fraught with issues including errors in GH history and changes to characters that fans did not appreciate.

As she departs from the writing world, we here at CDL wish Jean Passanante nothing but the best as she pushes forward into retirement. Come back to CDL for all your General Hospital spoilers and news!