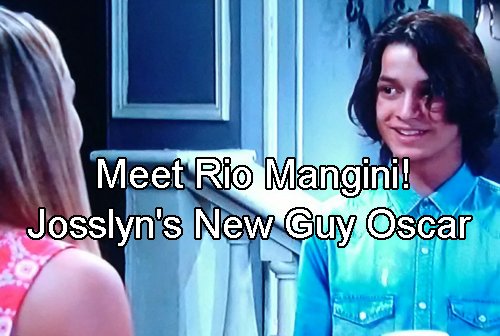 General Hospital (GH) spoilers revealed a new character to the player canvas in GH this week and it’s a boyfriend for SORAS’d teen Josslyn Jacks (Eden McCoy). Although leaked audition scripts had branded the newcomer as “Noah” he was introduced as “Oscar” and there’s no last name given in the General Hospital credits. Oscar is played by talented newcomer to soaps Rio Mangini, although he’s got a longer professional resume than some of the other GH cast.

Rio is 14 years old, so he’s age appropriate to play as a scene partner and romantic interest for Eden McCoy. Rio no doubt came to GH’s attention because of his work on Disney Channel shows. Rio played the role of Sam on Kickin’ It, a karate themed show on ABC’s kid themed partner channel. Rio has been acting since he was little and seems an old hand now. Rio also had a role on Disney hit Good Luck Charlie.

Other credits include Miles from Tomorrowland (another TV series) and Bella and the Bulldogs on Nickelodeon. Rio had a one episode role on dark teen drama Teen Wolf and has had several short film roles in recent years. Rio also landed a role on what’s sure to be a big hit animated movie called BOO: Bureau of Otherworldly Operations where he’s starring with big names including Seth Rogen, Melissa McCarthy, Matt Bomer, and Bill Murray among others. 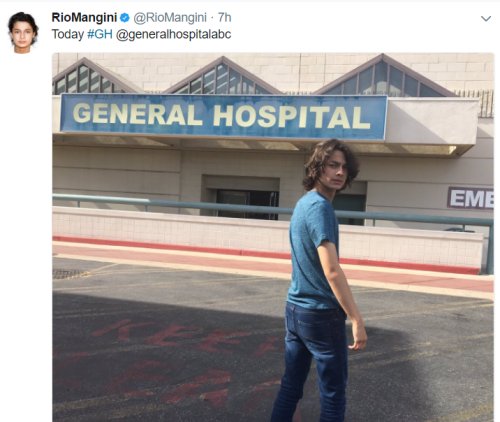 But don’t assume young Rio is simply an actor. This kid is well rounded in the talent department. A leaked General Hospital script for the role shared that Josslyn’s new guy would have some musical interest so the ABC soap must be planning to feature Rio’s other talents. Rio is a piano prodigy who has already performed twice at Carnegie Hall, both times before he was 10 years old. He was recently hired to score the film Reach, a movie about a suicidal teen.

Rio also had a small part in the movie Reach where he worked with another General Hospital alum, Corbin Bernsen. You might recall that Corbin played Carly Corinthos’ (Laura Wright) dad John Durant years ago but he was killed by criminal thug Manny Ruiz (Robert LaSardo). It’s interesting that Rio has a six degrees of separation link to GH’s Carly since he’ll be dating her on-screen daughter Josslyn. It was revealed on General Hospital this week that Joss had a crush on Oscar and they finally got to talk at her party.

Of course, next week on new GH episodes, Joss’s grandma Bobbie Spencer (Jacklyn Zeman) will break up the impromptu festivities, but Joss will be hanging out with Oscar again soon. GH buzz has it the kid will play guitar and hang out at the stables where Joss likes to go ride. Rio shared a photo of himself outside the General Hospital marquee at the Prospect Park studio lot to promote his first scenes on the GH soap although the teen has been shooting on set for several weeks now.

What do you think of Rio Mangini as Oscar? Are you ready for teen troublemaker Joss to get a boyfriend for some summer romance? Share your comments and tune into CDL for more General Hospital spoilers and news.