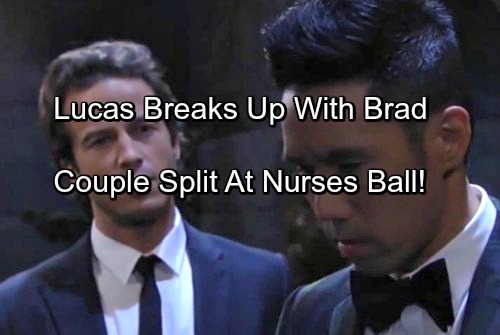 General Hospital (GH) spoilers reveal Brad Cooper (Parry Shen) is about to get a big comeuppance for his awful deeds. Lucas Jones (Ryan Carnes) will soon learn that his husband is back to his low-life ways and won’t accept that. It looks like Brad is going to lose his job, husband, and all his plans for the future. Here’s how karma will come for sneaky terrible Brad.

Since Brad came to Port Charles four years ago, he’s exhibited the worst and lowest behavior. Brad was never a good guy. Right away, he was unethical as he helped Britt Westbourne (Kelly Thiebaud) fake lab tests while pregnant with a stolen embryo. Brad also tried to blackmail Michael Quartermaine (Chad Duell) into sleeping with him which was even creepier since Michael was raped in prison. 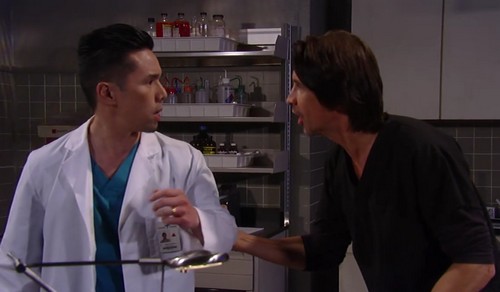 Brad cheated on Felix DuBois (Marc Anthony Samuel) with Lucas while lying to both. Even when Lucas and Brad were dating, the deception didn’t stop. Brad proposed to Lucas at the 2015 Nurse’s Ball even though he was secretly married to Rosalie Martinez (Linda Elena Tovar). Even that didn’t get Lucas to dump Brad permanently, but General Hospital spoilers reveal that things are about to change for the worse. 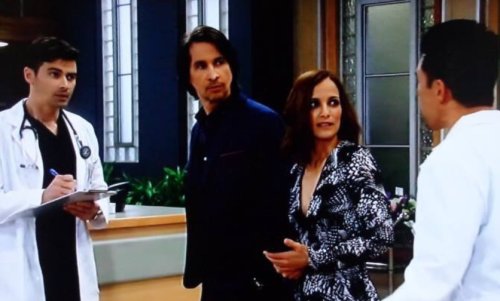 Brad did a tiny bit of lab work for Dr Hamilton Finn (Michael Easton) and then wanted a big fat share of the profits. Brad tried blackmail but didn’t stop to realize if Finn hadn’t donated the Blackwood cure profits to General Hospital, neither of them would have a job. Brad is so blinded by jealousy and hatred that he doesn’t see if not for Finn’s cure, he and Lucas would both be job hunting.

All of Brad’s latest dirty shenanigans will come out at the Nurse’s Ball. Griffin Munro (Matt Cohen), Finn and Hayden Barnes (Rebecca Budig) figured out something wonky is going on in the General Hospital lab, but they don’t have proof yet that confirms Brad is the culprit, although who else would it be messing with Finn’s drug tests? Brad is pushing so hard to get Finn fired, he hasn’t noticed he’s being watched.

Brad tries to get Laura Spencer (Genie Francis) to bring up firing Finn at a board meeting after he was frustrated by the lack of Quartermaine cooperation in his sabotage efforts. But it will be Brad’s name that is mentioned when Hayden sets a trap to prove once and for all that Brad is the one behind the tampered drug tests according to General Hospital buzz. But firing might be the least of Brad’s worries. 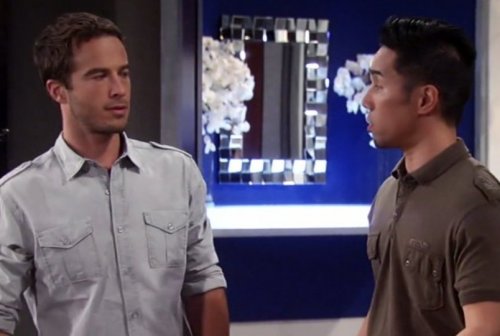 Brad was hoping to buy a condo to settle down with Lucas, but that’s sort of a sloppy plot point since Lucas is a successful doctor who should already be able to afford to buy them a home. Despite the sketchy writing around this plot, plenty of General Hospital fans can’t wait to see Brad get what’s coming to him. Hayden will prove Brad is the lab culprit and Lucas will find out his husband is just as bad as ever.

The big irony of Lucas finding out all the dirt on Brad and dumping him at the Nurse’s Ball is that’s where they got engaged in 2015 and where they would have wed in 2016 if not for the attack of the GH serial killer (another poorly written plot). Brad will lose Lucas and his future next week. Share your comments below on karma coming for Brad and tune into CDL for more General Hospital spoilers.