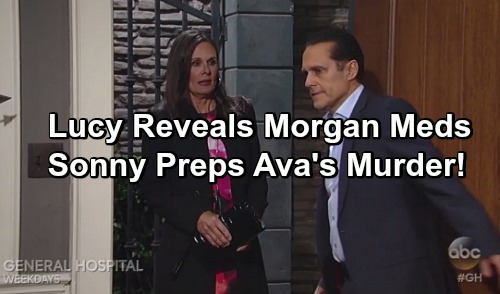 Lucy meets Scott Baldwin (Kin Shriner) at the MetroCourt for brunch and some brutal talk. Lucy hasn’t forgotten about the pill bottle she saw Ava throwing away nor has she forgotten that Scott tried to steal it from her. Lucy knows the bottle is important but she has no context for what it means.

What the pill bottle does is serve as evidence that links Ava to Morgan’s medication and from there, to his death from the car bomb meant for Julian Jerome (William deVry). All Lucy knows is Ava shouldn’t have had the bottle and was disposing of it in a shifty – and very sloppy – manner on the sly. 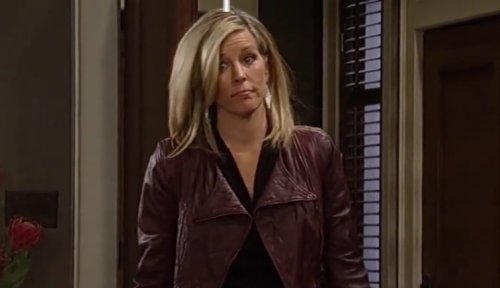 Scott tries to dissuade Lucy from doing anything with the bottle but whenever Scott tries to talk her out of something, he’s only making her more stubborn and unrelenting. That’s what will happen at the MetroCourt and Lucy decides to ignore Scott and march herself over to Casa Corinthos.

General Hospital spoilers say Lucy does not arrive at an opportune time. Carly Corinthos (Laura Wright) and Sonny were bickering that morning. Then Sonny had face time with Laura Spencer (Genie Francis) and found out Nelle Hayes (Chloe Lanier) is working for Valentin Cassadine (James Patrick Stuart). He’s not in a good mood.

Carly went over to see Sam Morgan (Kelly Monaco) and little Scout and got some advice about salvaging her marriage. Sonny got similar advice from Laura about patching up his relationship with Carly. Then Carly showed up, ready to talk, and it seems like a good thing – then the interruption. 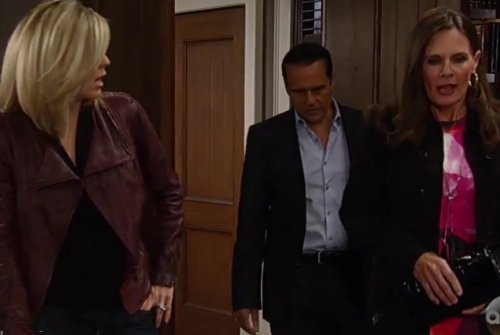 Sonny is not happy to see Lucy – it’s obvious on the new General Hospital video promo. Carly isn’t either and has no idea why the town gossip and troublemaker is at Sonny’s door. Sonny asks what’s so important that she showed up at his door and what Lucy says sounds like big trouble for Ava.

Lucy says to Sonny and Carly that she’s waited long enough and can’t wait any longer. Lucy has the bottle of Morgan’s pills in her hand and seems to be on the cusp of handing them over and telling Mr and Mrs Corinthos that she found Ava tossing them shortly after Morgan died.

If Lucy does that, Ava might as well jump off the same bridge Julian went off because she’s as good as dead. General Hospital spoilers tell us that once Lucy hands that bottle over to Sonny, Ava’s fate is sealed and there will be blood. But, then again, nothing on General Hospital ever gets resolved that fast. 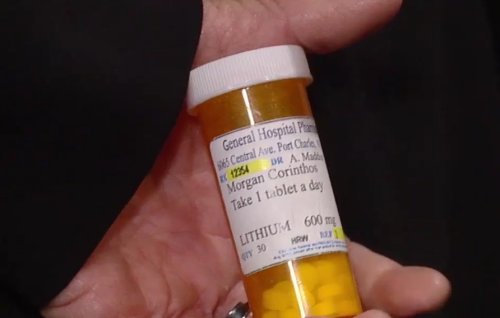 Based on General Hospital spoilers for later next week (March 24-31), Lucy will change her mind about handing over the bottle. Lucy may be too scared of Sonny and Carly to come clean. After all, consider how long Lucy had the bottle. They would be furious that she didn’t hand it over right after she found it.

Lucy goes back to Ava and extorts her for money once she realizes how much the pill bottle is truly worth but this will all come spilling out soon no matter what. Sonny will find out shortly that Ava caused Morgan’s death. If she hadn’t meddled with his meds, Morgan would never have stolen Julian’s car and been near the explosion.

That makes Ava as much – or more – responsible for Morgan’s death than even Olivia “Liv” Jerome (Tonja Walker). Hopefully Lucy gets a big payday from Ava but, even so, Lucy’s neck might be on the line too once Sonny finds out she conspired to keep the truth from him for a buck.

Watch the new General Hospital video promo below and share your comments on the action coming on the Monday March 24 GH episode. Tune into CDL often for the latest General Hospital spoilers, news and updates.