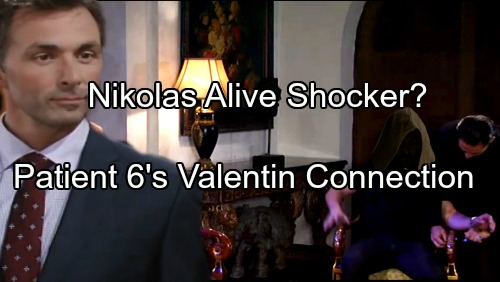 General Hospital (GH) spoilers tease that Patient Six (Steve Burton) will face more twists as he makes the journey home. This storyline will add some complications as it moves along. Right now, GH is giving out plenty of clues. They’re providing an elaborate mystery, but it’ll take a while for the show to put it all together.

Of course, Betsy (Deborah Strang) threw us a bone with her twin revelation. At least someone confirmed that Jason (Billy Miller) indeed had a brother. Betsy claims Drew died, but we can assume that’s not true. There’d be no reason to include the twin shocker if Drew was actually gone. One of the Jasons will have to be the confused bro and it’s probably Miller’s version according to recent General Hospital spoilers.

It seems likely that Drew was stolen, so that’s something the show will have to clarify later. However, there are more pressing puzzles to ponder. There appears to be some sort of Nikolas (Tyler Christopher) connection. General Hospital spoilers reveal that Huxley (Trent Dawson) will return to stir up trouble.

Huxley was the strange British man who held Nikolas hostage with Ava (Maura West). This obviously took place before the unlucky Cassadine’s demise. It looks like Huxley will stumble across Patient Six on the ship to America. Why is Huxley getting back in the mix? Will he turn out to be a friend or foe?

It’s possible that Patient Six will get a hint about Nikolas’ survival. If Patient Six can reunite Ava with Nikolas, that’d be a good way to repay her down the road. Then again, the inclusion of Huxley might lead to Valentin (James Patrick Stuart). GH may be setting up a tie-in that will take this story in a new direction. 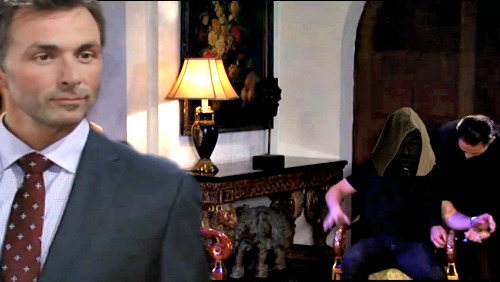 After all, Valentin broke the family tree frame and dropped blood on Nikolas’ name. It was seemingly meant to be a fake-out when Patient Six popped up, but there must be more to it. These hot plots are about to merge.

Having Ava find and aid Patient Six was a smart move. That’ll give Ava an ally once the truth comes out. If Patient Six comes up with evidence against Valentin, that might be helpful as well. Laura (Genie Francis) certainly has no intention of letting us forget Nikolas!

General Hospital spoilers say there’ll be loads of drama waiting for Patient Six back in Port Charles. He knows Sam (Kelly Monaco) and Sonny (Maurice Benard) since he made those phone calls. Patient Six may turn out to be Oscar’s (Garren Stitt) father, too.

With the addition of the Valentin and Nikolas chaos, things are going to get tricky! We’ll give you updates as other GH news comes in. Stay tuned to the ABC soap and don’t forget to check CDL often for the latest General Hospital spoilers, updates and news.