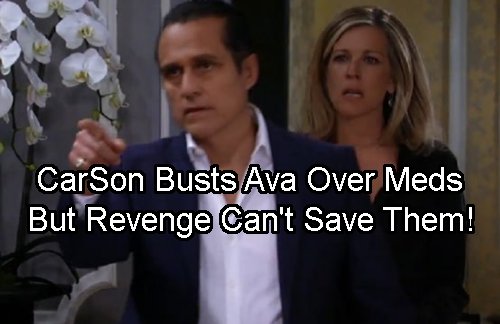 General Hospital (GH) spoilers reveal Sonny Corinthos (Maurice Benard) mistakenly think there’s hope for him and Carly Corinthos (Laura Wright) after they finally get some closure on the death of their son Morgan Corinthos (Bryan Craig). But Sonny couldn’t be more wrong – Carly will soon have her eye on another man that’s a 180 degree change from her ex. It’s former priest Griffin Munro (Matt Cohen).

Carly catches Sonny bedding her ex lawyer Martina Morales (Daya Vaidya) and that blows up in a big way. Carly keeps getting close to letting this divorce go back to being amicable but then Sonny crosses her all over again. Him wrecking Jasper “Jax” Jacks’ (Ingo Rademacher) life was horrible since it cost Josslyn Jacks (Eden McCoy) the chance for her dad to visit her in Port Charles. And then Sonny salted the wound.

After raking Carly over the coals for shagging Jax – even though Sonny told Carly they were done – Sonny has now hopped in bed with someone else. It would be one thing if it was a stranger to Carly, but for it to be the shark of a lawyer she flew in from LA is doubly infuriating. Carly reignites the divorce war and although she doesn’t want to use Scott Baldwin (Kin Shriner), she might, since he hates Sonny, too. 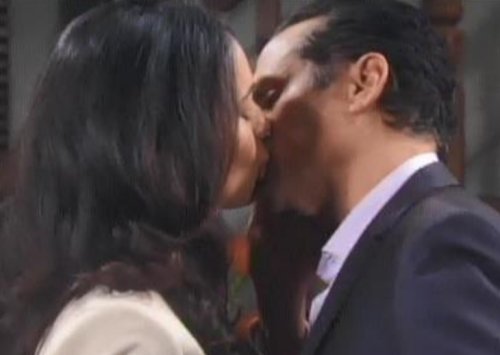 It doesn’t seem that Martina is sticking around Port Charles for too long, but that doesn’t mean the memory of Carly catching Martina and Sonny in bed together won’t linger. That’s not something Carly will soon forget. The week of the Nurse’s Ball, new information breaks loose thanks to Dr Andre Maddox (Anthony Montgomery) and Ava Jerome’s (Maura West) duplicity is revealed.

It won’t be until the week after the Nurse’s Ball that the crap really hits the fan and Sonny and Carly come for Ava seeking revenge and justice for Morgan’s death. GH spoilers reveal Carly and Sonny unite in their effort to make Ava pay and Sonny seems to think that means he and Carly are back on common ground. Sonny is wrong. Carly is only standing shoulder to shoulder with Sonny on this one issue.

As soon as Ava gets what’s coming to her, Carly is done with Sonny again. Sonny regrets the things he’s done over the past few months including lying about Nelle Hayes Benson (Chloe Lanier), having Jax deported, and bedding Martina. Too bad the mob boss doesn’t have a time machine, but there is no way to undo the damage he’s done. Sonny has his eyes on Carly, but she’s looking elsewhere. 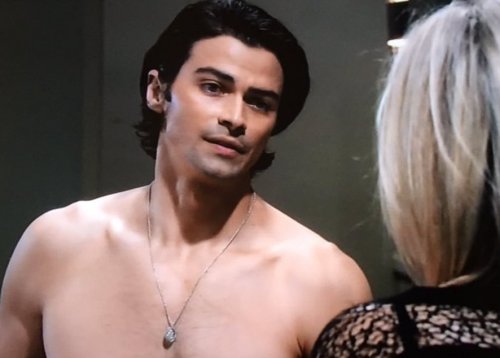 Carly wants something drastically different from Sonny and his violent lifestyle, mood swings, and darkness. What’s more different from Sonny than Griffin? The hunky doc saves lives instead of taking them, is inherently good, and there’s no risk that he would bring danger into Carly’s life. GH rumors have hinted for a while that Griffin would get a married girlfriend and it might just be Carly.

Perhaps the best thing about pairing Griffin with Carly is that Sonny can’t hate on the guy. Griffin is a great guy and would make Carly’s life far better than Sonny can. Share your comments on the possible pairing of Griffin and Carly – and CarSon’s seemingly permanent split, Be sure to tune into CDL often for the latest General Hospital spoilers and news.