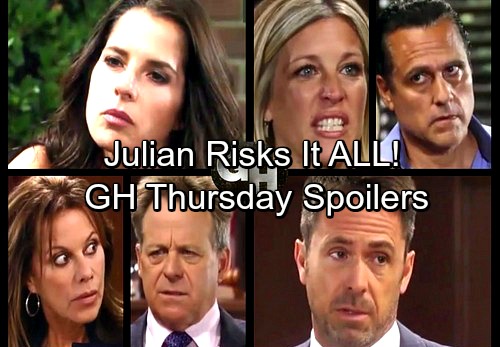 General Hospital (GH) spoilers for Thursday, August 24, tease that Julian (William deVry) will push Scott (Kin Shriner) to let him get on the stand. Rudge’s (David Lee) testimony did some damage, but Julian will hope he can fix it. He’ll want the opportunity to share his side of the story.

Scott won’t believe that’s the best plan. The prosecution could tear Julian to shreds. There’s a good chance Scott will ultimately listen to his client, but he won’t be happy about it. Julian is opening himself up to some tough questions, but he’ll think he can handle whatever comes his way.

Meanwhile, Anna (Finola Hughes) will reach out to Finn (Michael Easton). She’ll hope that he can do her a favor, but Finn will be reluctant to get involved. This is about the diamond Anna is researching. She needs Raymond Berlin’s (Robert Curtis Brown) input and Finn might be the only one who can score her a meeting.

Finn will get on board as some point, but a new problem will emerge. General Hospital spoilers state that Lucy (Lynn Herring) will drop by to talk about the house. Finn planned to purchase a home with Hayden (Rebecca Budig), but that’s not going to work out. Lucy will ask Finn what he wants to do. She probably has another offer on the table.

Will Finn pass on it or hold off a little longer? It seems he’s not quite ready to give up on Hayden, but that may or may not affect his housing dilemma. Regardless, Finn will eventually have to accept that Hayden’s not coming back.

Across town, Valentin (James Patrick Stuart) will pop in Nina’s (Michelle Stafford) office. It looks like she’ll be stressed over work, but Valentin will have just the thing to cheer her up. Nina will be thrilled when Charlotte (Scarlett Fernandez) appears. They’ll enjoy a visit that could really shift Nina’s perspective.

Other General Hospital spoilers say Sam (Kelly Monaco) and Jason (Billy Miller) will have a serious discussion. They’ll rehash Sam’s ordeal as she wonders why she didn’t ask Jason for help. She’ll feel guilty for refusing to trust her husband, but they’ll try to tackle this and move on.

Carly (Laura Wright) and Sonny’s (Maurice Benard) issues could take far more work. GH spoilers indicate that Carly will rip into Sonny for putting up walls. She’ll suggest that they always trusted each other before. Carly will ask when that changed.

Sonny didn’t want to make a bad situation worse, but Carly still won’t understand how he could lie to her face. How will Sonny make this up to Carly? We’ll give you updates as other GH news comes in. Stay tuned to the ABC soap and don’t forget to check CDL often for the latest General Hospital spoilers, updates and news.