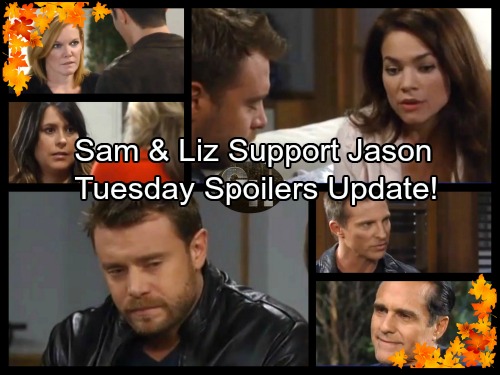 General Hospital (GH) spoilers for Tuesday, November 21, tease that there’ll be plenty of gratitude in Port Charles. Patient Six (Steve Burton) will feel particularly grateful this Thanksgiving. He’s happy to be home for the first time in five years.

Classic Jason will definitely look forward to bonding with his loved ones at their celebration. Sonny (Maurice Benard) will assure P6 that they’re glad to have him back. Meanwhile, Carly (Laura Wright) and Robin (Kimberly McCullough) will mull over their big blunder. They both convinced themselves that Billy Miller’s character was actually Jason, but now they see the error of their ways.

Of course, GH fans know there are several phases ahead in this storyline. Everything isn’t as clear-cut as it seems, so Patient Six and current Jason are still vying for the Jason Morgan title. For now, Miller’s Jason will worry about all the doubters. He’ll feel like so many people have turned against him, but Liz (Rebecca Herbst) will promise that she’s staying in his corner.

Besides, Liz will believe answers are coming soon. She’ll think Jason will be able put this issue to rest and move on with his life. It looks like Franco (Roger Howarth) will find someone to console on Tuesday as well. He’ll offer sympathy to a foe, so maybe current Jason will be the one who gets an awkward pep talk.

Across town, Sam (Kelly Monaco) will express confidence in Jason’s resolve. She’ll let Alexis (Nancy Lee Grahn) know that Jason intends to build something that lasts for their family. That’s part of why Jason’s so bent out of shape over Patient Six. He doesn’t want P6 swooping in and taking his media company or anything else.

Other General Hospital spoilers say Ava (Maura West) won’t give up on her goal. She’ll think getting her face back to normal is the only path to happiness. Griffin (Matt Cohen) will continue to be against the idea, so Ava’s concerns about their romance could grow. She’s been feeling like she’s too immoral for a guy like him. Ava doesn’t want to pull angelic Griffin into the darkness.

However, Griffin isn’t ready to throw in the towel yet. He’ll smile and insist that he’s not going anywhere. Griffin understands that they’re different and it hasn’t scared him off so far. General Hospital viewers will be anxious to see how long Griffin and Ava can make it work.

Elsewhere, Nora Buchanan (Hillary B. Smith) will hold a press conference. She’ll step up to a cluster of microphones and announce that she’s the attorney on record for Olivia Jerome (Tonja Walker). Did Nora fulfill Valentin’s (James Patrick Stuart) request? Will she read a statement from Liv that clears Julian’s (William deVry) name?

Regardless, getting Julian out of prison won’t be quite that easy. We’ll give you updates as other GH news comes in. Stay tuned to the ABC soap and don’t forget to check CDL often for the latest General Hospital spoilers, updates and news.