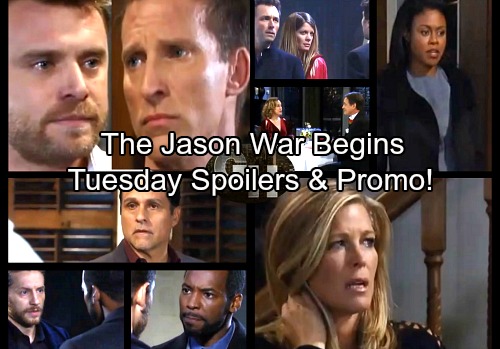 General Hospital (GH) spoilers for Tuesday, October 31, tease that Jordan (Vinessa Antoine) will demand some answers. She’ll ask if anybody wants to tell her what she’s looking at right now. Jason (Billy Miller) and Patient Six (Steve Burton) are finally in the same room together, which means it’s time for a whole lot of confusion.

It looks like Patient Six will have to explain his side of the story and hope that he can get a few more people on his side. Carly (Laura Wright) will join “Team Classic Jason” before long, so that should be helpful. Patient Six could use all the support he can get. That’s especially true since current Jason will be convinced that P6 is an impostor.

Burton’s Jason will want to be with Sam (Kelly Monaco) at the hospital, but he won’t get the chance just yet. There’s plenty of explaining to do before Patient Six can have a real conversation with the woman he loves. Sam needs to recuperate from her ordeal anyway, so that’ll give classic Jason some time to think about what he’s going to say.

Meanwhile, Andre (Anthony Montgomery) and Dr. Klein (Gene Farber) will have a heated argument. When Dr. Klein offers suggestions on how to handle their problem. Andre will cut him off. He’ll insist that if he’s been compromised, things have changed. Andre will contend that he needs to make plans of his own.

Other General Hospital spoilers say Dante (Dominic Zamprogna) will grill Nina (Michelle Stafford) and Valentin (James Patrick Stuart). He’ll hope they can offer some info that relates to the night’s events, but he’ll probably be out of luck. Valentin and Nina will seem thoroughly perplexed by the situation that played out at the party.

Elsewhere, Finn (Michael Easton) will try to bail on Anna’s (Finola Hughes) crazy plot. He’ll want to wrap up the Cassandra (Jessica Tuck) drama and put an end to their fake romance. Of course, Anna can be pretty persuasive. It sounds like Anna will push all the right buttons and keep Finn focused on the task at hand.

Across town, Laura (Genie Francis) will be blown away by Kevin’s (Jon Lindstrom) touching proposal. GH spoilers hint that Laura will accept and assure Kevin that she’s ready for their future together. This cute couple appears to be headed down a pleasant path.

NotJason: “You’re damn well gonna tell me where my wife is”