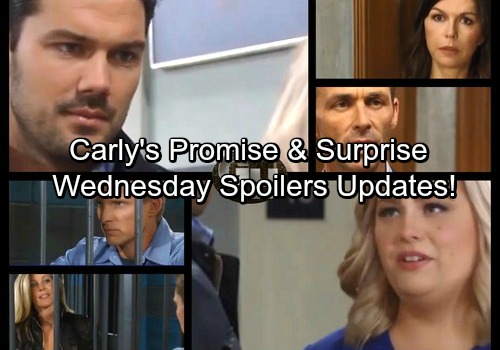 General Hospital (GH) spoilers for Wednesday, November 8, tease that Sonny (Maurice Benard) will get riled over Patient Six’s (Steve Burton) drama. His buddy has been through a difficult ordeal and Dr. Klein (Gene Farber) could be the key to finding out who’s behind it. Sonny will interrogate the doc about who ordered Patient Six’s kidnapping.

Dr. Klein could get rattled during this encounter, but he may not have the answer Sonny’s seeking. Based on Andre’s (Anthony Montgomery) revelations, it seems they may not know who’s running the show. Still, there might be another go-between that Dr. Klein can sell out. He’ll undoubtedly say whatever he thinks is in his best interest.

Meanwhile, Patient Six will remain behind bars. Carly (Laura Wright) will pop in for a quick chat with classic Jason. She’ll promise that he’s going to get his life back on track. Carly will do everything in her power to help Patient Six recapture what he’s lost, but that plan won’t exactly pan out.

Carly has faced a lot of shockers lately, but a pleasant surprise is headed her way on Wednesday. General Hospital spoilers say Michael (Chad Duell) will make a confession. He’ll come clean about breaking up with Nelle (Chloe Lanier), which might lead to a veiled “I told you so.” Nevertheless, Carly will offer sympathy mixed in with her disguised gloating. She’ll hate to see Michael in any pain.

Of course, there appears to be more to the story. GH buzz hints that a twist could be coming up, so maybe Michael and Nelle’s connection will come back into play pretty soon. For the time being, Michael will have a discussion with Sonny. He may reveal some dating disaster details, but he’ll suggest he’d rather hear about Patient Six.

Sonny will confirm his belief that P6 is the real Jason Morgan. We’ll see how long Sonny can stand by that claim. Across town, Valentin (James Patrick Stuart) will meet up with Anna (Finola Hughes) again. He’ll insist that he’s decided to accept her latest offer. Valentin intends to keep crooked Cassandra (Jessica Tuck) away from his family, which means he’ll have to play just as dirty.

At GH, Nathan (Ryan Paevey) will comfort a concerned Amy (Risa Dorken). She’ll worry that Chet (Chris Van Etten) could get arrested over his opioid possession, but Nathan will offer reassurance. It sounds like Chet will remain a free man, but he’ll need Finn’s (Michael Easton) and Amy’s support to carry on.

Over at Crimson, Nelle will talk to Nina (Michelle Stafford) about being broke. She’ll get mixed up in some risky business as she tries to improve her situation. Will Nelle eventually use the dirt she has on Valentin? We’ll give you updates as other General Hospital news comes in. Stay tuned to ABC’s GH and don’t forget to check CDL often for the latest General Hospital spoilers, updates and news.