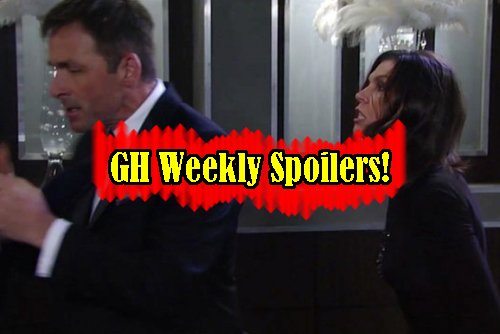 General Hospital (GH) spoilers for Monday, January 23 thru Friday, January 27 reveal that Sam Morgan (Kelly Monaco) cuts a deal with Liz Webber (Rebecca Herbst) to look into the Tom Baker (Don Harvey) murder even though her initial reaction was negative.

They agree to put their discomfort with each other aside and follow the evidence no matter if it implicates Sam’s mother or Liz’s boyfriend. Sam confronts Alexis Davis (Nancy Grahn) this week and Alexis breaks down and confesses all her recent sins.

She tells Sam about her sobriety struggle, keeping Julian Jerome (William deVry) stashed at her house, and being with Tom the night he died. Sam is outraged that her mother has been lying but wants to protect her so she digs into the case with gusto.

Liz makes a scary discovery at the roadhouse when she comes across Franco’s (Roger Howarth) phone in the snow and sees blood on it. Liz turns to Scotty Baldwin (Kin Shriner) for help and he goes into Gene’s with a pic of Alexis asking questions.

Kiki Jerome (Hayley Erin) also gets drawn into the Franco investigation and she brings Dillon Quartermaine (Robert Watkins) into it with her. They continue to get closer while trying to help clear her pseudo-dad of murder charges.

By mid-week Franco must face the consequences of his actions, but is he dealing with Julian’s minion or Seth Baker (Michael Rodrick)? Liz shares her suspicions about the killer with someone by the end of the week and Sam finds a critical clue.

Liz is in danger trying to save Franco. Dante Falconeri (Dominic Zamprogna) and Nathan West (Ryan Paevey) get closer to finding a suspect. Will this be another bad arrest of either Franco or Alexis or have they figured out Seth is the likely killer?

Julian must use blackmail to get his way this week and Alexis continues her sobriety struggle but is caught off guard. By the end of the week, Jason Morgan (Billy Miller) is sick – has Olivia Jerome (Tonja Walker) done something to the former hit man?

Hamilton Finn (Michael Easton) is fighting his addiction and Hayden Barnes (Rebecca Budig) and his new guy pal Brad Cooper (Parry Shen) both notice that the doc is off his game and wonder what’s up. Brad also runs into Liz when she’s searching for Franco.

Carly Corinthos (Laura Wright) is back and reconsiders being with Sonny Corinthos (Maurice Benard) when he contemplates more mob violence. Carly tries to sort out her feelings and shares her concerns with Michael Quartermaine (Chad Duell).

Sonny has some words to say to Nelle Hayes (Chloe Lanier) now that he’s convinced she’s up to no good and has an ulterior motive. Kevin Collins (Jon Lindström) and Laura Spencer (Genie Francis) get closer this week as he opens up to her.

Jordan Ashford (Vinessa Antoine) and Curtis Ashford (Donnell Turner) reminisce about old times while they’re out of town together. GH spoilers reveal Curtis and Jordan will cross a line and Andre Maddox (Anthony Montgomery) will lose it.

It’s a busy week in Port Charles from Monday, January 23 thru Friday, January 27. Share your comments below and tune into CDL often for the latest General Hospital spoilers and updates.