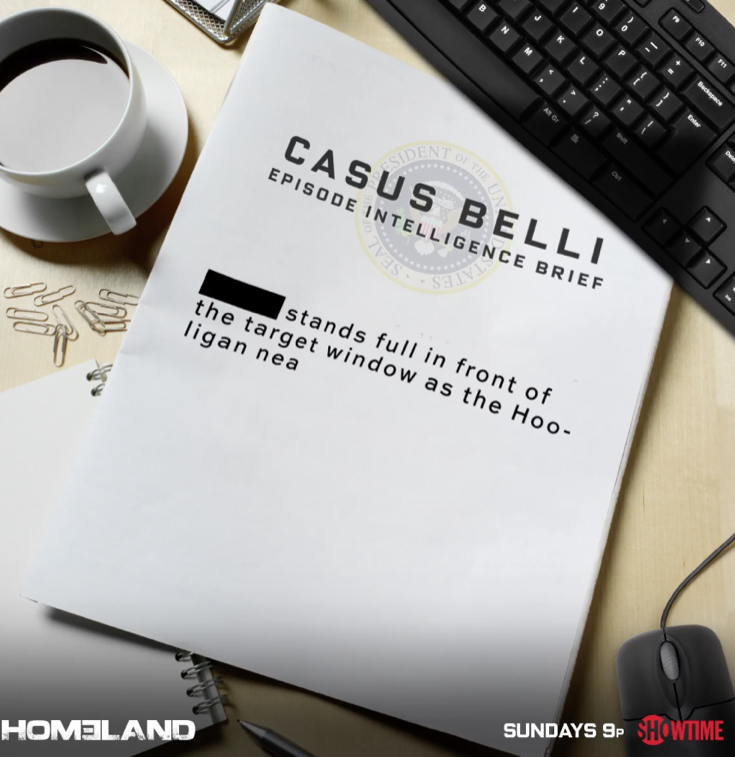 Tonight on Showtime their Emmy Award-winning drama series, Homeland airs with an all new Sunday, February 19, 2017, season 6 episode 5 called “Casus Belli,” and we have your weekly Homeland recap below.  On tonight’s Homeland Season 6 episode 5 as per the Showtime synopsis, “Keane gets sidelined; Carrie’s (Claire Danes) work follows her home.”

Tonight’s episode of Homeland picks up where we left off last week – a bomb just exploded in Sekou’s delivery truck as he was driving down a busy street. There are at least 2 killed and a dozen wounded. The police and emergency crews are on the scene and the media is in a full-blown frenzy.

Meanwhile, President Elect Keene is being rushed to a safe house by security. She’s not thrilled by the security measures and thinks that everyone is over-reacting. But, for all they know, this could be just the beginning of a major terrorist attack.

At Carrie’s house, Frannie and Quinn are gathered around the TV and watching news coverage of the explosion. Carrie receives a frantic phone call from Reda, the FBI is at the office, Reda just learned that Sekou was driving the bomb that exploded. Reda tells Carrie to get to Sekou’s apartment ASAP, his mom and his sister are being interrogated by the feds already.

Frannie’s school was cancelled because the city is on lock down, and she doesn’t have a babysitter. Against her better judgement, Carrie leaves Frannie at home alone with Quinn.

President Elect Keene’s flown out of the city by helicopter and tossed in an SUV. They still haven’t told her where they are taking her.

Carrie arrives at Sekou’s apartment and the FBI is interrogating his teen sister and distraught mother. They believe that Sekou set off the bomb intentionally. And, Carrie’s job is on the line. The agent that had Sekou arrested, screams at Carrie that this is all her fault, she blackmailed him in to releasing a terrorist.
Carrie heads straight to the NSA to warn Roger that the recording he gave her of Sekou is going to come back to bite him. She explains that the bomb that went off is being linked to Sekou. Roger reveals that he didn’t send her the

Back at Carrie’s apartment, Frannie and Quinn are doing just fine. Then, there’s a knock at the front door. Within minutes, Carrie’s house is surrounded by reporters and press vans. He babysitter manages to push through the crowd and make it inside to Quinn and Franny.

The reporters are stressing Quinn out. He grabs one of them and drags her inside. He chokes the reporter and demands to know who sent her and who tipped off the press. Then, he throws the woman out the front door and down the stairs. Frannie and her babysitter are freaked out by Quinn, but they can’t exactly leave the house. Protestor shave gathered outside, and are furious that Carrie helped free a terrorist, they are nearly storming the door and throwing rocks through the window. Quinn shoots one of the men and then tells Frannie to hide in the bathroom.

Carrie hears about what is happening at her house and rushes home, when she arrives the police have barricaded her house and won’t let her in – they think that Quinn is armed and dangerous and is holding her daughter hostage. Carrie screams that Quinn isn’t dangerous, he’s just trying to protect Frannie. The police refuse to listen to her – and try to send the swat team in. Their trip is unsuccessful, instead of taking out Peter, he takes the NYPD officer hostage too.

Saul returns from Tel Aviv and Dar picks him up from the airport. Saul reveals that he thinks Mossad is helping Iran and Nafisi cover up that they are cheating on the nuclear deal. So, he went straight to the source, Javidi, he’s waiting for him to get back to him let him know what is really going on in Iran.

Outside of Carrie’s house, it’s getting dark, and the NYPD realizes that they have severely underestimated Quinn. The chief finally allows Carrie to go in to her house and try to talk some sense in to Quinn, which was what they should have done in the beginning.

Carrie finds Quinn sitting in the dark with a rifle – she’s relieved that Frannie and her baby sitter are safe. Quinn has the cop bound and gagged. Quinn begins frantically trying to explain to Carrie that they are being set up, and he has proof on his phone that someone has been watching them. While they are talking, the police barge in and arrest Quinn and take him away in cuffs.

Back at the safe house, Keene is freaking out because no one will tell her anything about the explosion. She can’t use any phones or internet devices, and they won’t even let her talk to her Chief Of Staff Rob. They finally let Keene watch the news, and the media I lambasting her for running away and fleeing the city after she was the one who was so lenient on Iran.

Carrie sends Franny to stay at her baby sitter’s house after the chaos dies down at her house. Carrie’s house is destroyed, but she finds Quinn’s phone on the floor under smashed glass. She’s shocked when she looks through the pictures on his phone and realizes that Quinn was right, he had photos of the man across the street tampering with Sekou’s delivery van in the middle of the night.