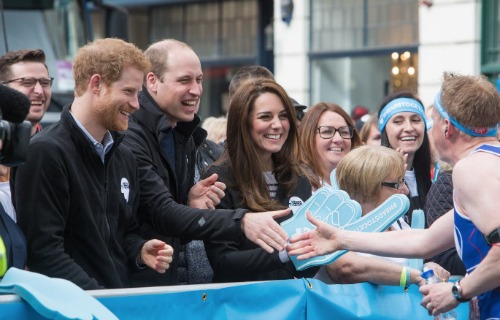 Kate Middleton was clearly amused after London marathoners squirted Prince William with water in his face. The rude moment happened while the Duke and Duchess were handing out bottles of waters to runners during the annual race.

Prince William, Kate Middleton and Prince Harry were all on hand to cheer on the 40,000 runners on Sunday, April 23. William and Kate watched the race from the sideline when several runners squirted William in the face. It’s unknown if the moment was supposed to be light-hearted or intentional. Either way, Prince William definitely didn’t expect it as he was clearly shocked that someone would be cheeky enough to do that to him. 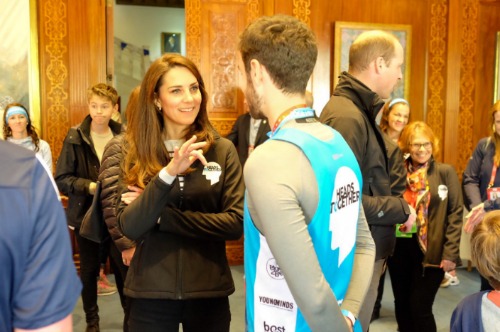 Kate, on the other hand, clearly enjoyed the moment, even though she tried to hide it from her face. Luckily, the Duchess wasn’t targeted. Although she did look like she was less than impressed when a few droplets of water did land on her jacket.

Sure, Prince William later laughed off the moment, but at the same time, he didn’t have another choice. A highly upset and irritated Prince William would have made headlines the next morning. And right now, William doesn’t need that kind of embarrassment. Even though a lot of royal observers believe that the moment was disrespectful, there’s not much that William can do about it. He and Kate already have a bad reputation for being two work-allergic royals who do very little in the public eye. 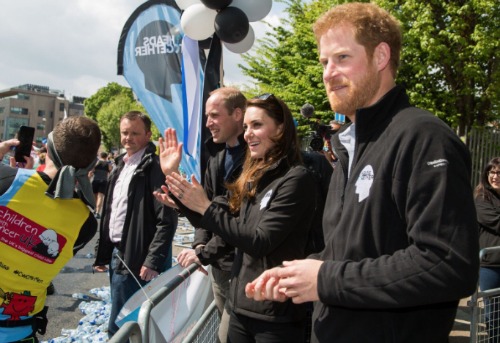 Plus, if Kate Middleton got drenched, it would be the end of it. There’s no way she would take that kind of humiliation in public. It’s difficult enough for both her and Prince William to more work than they are expected. Then again, a lot of royal critics have been saying for years now that Prince William and Kate Middleton need to change their PR strategy and be more approachable in public, whether they like it or not.

After the race, both Prince William and Kate Middleton greeted racers at the finish line. William looked like he managed to brush off the moment as both he and Kate spoke to athletes and posed for selfies with their fans. So far Buckingham Palace has not made any comments about the incident. Also, don’t forget to check back with CDL for all the latest news and updates on the royal family right here.

The Duke & Duchess and Prince Harry hand out medals at the finish line of the @LondonMarathon #TeamHeadsTogether #LondonMarathon pic.twitter.com/9dve5m7gTI