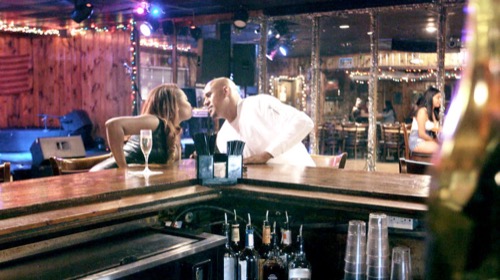 Tonight on VH1’s hit series Love & Hip Hop Hollywood returns with an all-new Monday, August 7, 2017, episode and we have your Love & Hip Hop Hollywood recap below for you.  On tonight’s season 4 episode 3, “New Bae,” as per the VH1 synopsis, “Teairra’s new man clashes with her social circle; Chanel leaps to her friend’s defense at Safaree’s party; Ray J’s secret weighs on his conscience; Lyrica issues a startling demand to A1; and Alexis and Solo’s relationship hits a snag.”

This week on Love and Hip Hop Hollywood everyone is heading to A1’s record label launch party. Ray is talking to Solo who is there with his girlfriend Alexis Sky. Princess tells her “If Ray and I had a baby right away I would be happy.” Alexis is also concerned that she could be pregnant, but unlike Princess, she is not happy.

Lyrica G is at the party and she is not happy. She asks her daughter “When is it going to be time for your record to come out? It looks like he is putting you on the back burner.” A1tells her “I have a couple other female artists that I am looking to sign.” This sets Lyrica A off. She says “We are not signing any other females until my record is off the ground.”

Teairra is in a good place. She is now dating Cisco whom she has convinced to move out to LA with her, She tells him “I want you to meet my friends.” Cisco says “I’m not sure that they’re going to like me.” Teairra asks him “Why not?” Cisco says “I have a bad reputation,” She asks him “Are you your reputation?” Cisco says “Nope.” Eventually, he agrees to meet her friends.

Safaree is having his launch party for his coconut oil product. Chanet West Coast performs and impresses Safaree. The drama is on as Brooke shows up to confront Jade about her relationship with Marcus. When she and Jade come face to face Brooke says “Are you the one giving Marcus free legal advice?” Jade says “Yes I am. “ Brooke tells her “i heard what you’ve been going around telling people so I just wanted to hear it directly from you.” Jade tells her “I just helped him get divorced so we could be together.” Brooke is none to pleased to hear this. Nikki asks Jade “Were you Marcus’ wife?” Jade says “No, i’m not the wife.” Brooke says “Who are you?” Jade responds “I’m everything.” Chanel steps in and tries to defend Jade but Brooke is not having it and just walks away.

Zell meets up with Moniece and AD to talk about the situation between Alexis and Masika. He tells them about the meeting with Masika and how she disrespected him. Moniece asks if they had received the invite to dinner with Cisco from Teairra. They are apprehensive about the dinner because of past interactions with Cisco.

Alexxis and Solo meet up at Stir to talk about their relationship. She asks him “How do you feel about me?” Solo says “I feel like you are a better friend than people think.” Alexxis tells him “You know I’m late.” Solo is shocked. She tells him “I think I might be pregnant.” He says “That’s good!” She is shocked, and he is happy. She tells him “I don’t know what we’re going to do when you have baggage that can’t be gotten rid of.” Solo is not happy and the two get into a heated argument. He asks her “What do you want me to do?” She tells him “You need to handle your baby’s mother and stop her from coming at me on social media and messing with my money.”

Hazel E is working with Ray in the studio. Safaree is there with him . Ray is quite impressed with him. Cisco shows up at the studio to hang out with Safaree. Ray tells Cisco about the bet and how he now has to work with Hazel. He tells her “Nobody knew what to expect when you came into the studio, but you are killing it.”  After Hazel leaves Ray asks Cisco “What are you doing on the West?” Cisco tells him “I am dating Teairra.” Ray is shocked to hear this. Safaree says “When you’re dating a woman out here you’re dating all her friends and the gossip and the messiness they create.”

A1 is hanging out with Marcus to take a break from the drama at the record label. Brooke shows up and the tension is ratcheted up. A1 splits and Brooke confronts Marcus about Jade. She asks him “Where is your little paralegal ho?” Marcus is stunned that Jade would come to the cigar shop to confront him. He says “Can I ask you something?” Brooke tells him “No. I need you to get her here right now. I want to see the two of you together. “ When Jade shows up Brooke comes striding around the corner. She tells Marcus “I need you to go ahead and let you know who I am and what I am to you.” Marcus tells Jade “Brooke is the woman who that I love and want to spend the rest of my life with.” Jade is pissed when she hears this. She tells Marcus “I thought you would be the last guy to do this to me.” Brooke and Marcus leave the shop together, but when they get outside Brooke tells him “I’m done with you.” Marcus says “Why didn’t you do that while we were in there?” Brooke just walks away from him. He calls out “Brooke I love you!”

Princess takes a pregnancy test and it comes back negative. She is devastated. Ray comes in and asks her “What’s wrong?” Princess tells him “It’s negative again.” Ray hugs her as she cries. He tells her “It’s early still. We’ll get there and if we can’t do it naturally there are other ways.” Ray tells her “Come on let’s go have some fun.” Princess laughs as Ray leads her through the house.

A1 is in the studio working on Lyrica’s new album. While they are working A1 tells her “I’m just going to take this meeting real quick.” Lyrica is not pleased. A1 tells the two ladies “I would love to sign Angel because i know her.” He then brings Lyrica in and introduces her. He tells them “She will tell you why I can’t sign her.” Lyrica flies off the handle and tells the ladies “We aren’t signing any other female artists right now.” The two ladies really aren’t feeling Lyrica’s pompous attitude and they tell her “You seem threatened by other female artists.” Lyrica gets pissed and says “I’m never threatened by another female.”  When the ladies leave Lyrica turns her anger on her husband. She throws cups of water on him and tells him “You look thirsty.” A1 Iis just as angry. He tells her “You aren’t managing my career! You have my name because you’re my wife.”

Cisco and Teairra are heading out to dinner with her friends. The grilling begins as soon as they sit down. Moniece asks “Did you know that she has a problem with alcohol? Are you helping her with that?” Cisco says “Yeah.” Moniece immediately brings up the issues with Rich and Zell makes a comment that sends Cisco from the table, Her friends try to calm her. They tell her “Go get your man back and calm down,” Cisco says “I think your friends are a bit judgemental. I think I’m gonna wait for this cab and get out of here.” Teairra tries to get him to come back. Cisco says “I’m leaving. Your decision is either you come with me or you go back in there with them.”