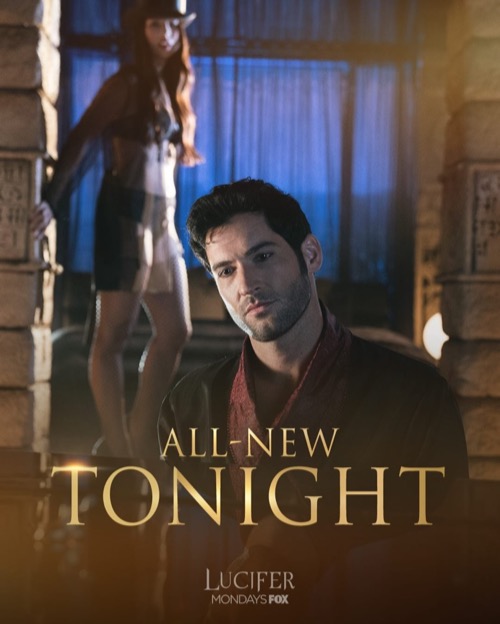 Tonight on FOX their drama Lucifer airs with an all-new Monday, November 20, season 3 episode 8 called, “Chloe Does Lucifer,” and we have your weekly Lucifer recap below. On tonight’s Lucifer episode as per the FOX synopsis, “When a murder is connected to a celebrity dating app, Lucifer and Chloe question all they know about the world of social media in order to solve the case. Meanwhile, Ella tries to avoid Charlotte, and Amenadiel helps Linda deal with the death of her ex-husband.”

Chloe and Lucifer are playing monopoly by the fire with Trixie. Lucifer comes home to find Amenadiel who makes fun of him for having his face painted. Amenadiel calls him boring. Lucifer is highly upset by this.

The next day, Lucifer tells Chloe that their victim is boring judging by her house. Wherever her soul is now it has to be a better place. The victim, a woman by the name of Kim, looks to have been killed by a heavy compact object, Ella surmises. Chloe and Lucifer talk to Kim’s roommate who tells them she and Kim belong to different squads. Last night, Kim was fighting with someone on the phone. Probably the Ty place she always ordered from.

Chloe discovers Kim called Top Meet, a dating service, not a Ty place. Her and Lucifer head there. They meet with Max, the CEO. Chloe gets a text just as Max hits on her, telling her she is interesting given her looks and profession. Chloe is just as interested since he was the one who was fighting with Kim on the phone the night before. They have their first potential suspect. Chloe tells Max he better has an alibi.

Ella is trying to carry some files when she runs into Charlotte. The two begin to talk. Charlotte thinks Ella is good enough to guide her, teach her to be good. Ella freaks, backing out the door. She tells Charlotte she is way too busy working to help.

Amenadiel comes to see Linda who is trying to pick out earns for her dead ex. She asks him for help.

The team goes over Kim’s murder, her only match through Top Game and the app. There is a party at Top Game tonight. Chloe wants to go for the investigation to find the possible killer. Lucifer is going to show her how to be frivolous and flirty!

Lucifer and Chloe role play with Ken and Barbie. Ken is bored to death when Barbie starts talking about a Costco run! Lucifer reminds her not to talk about Trixie.

Ella sees Charlotte waving at her from a distance and tries to run for it, but she is too slow. Charlotte has good news – she will be Ella’s new shadow.

Chloe makes Lucifer drool when she shows up outside Top Meet. Inside, Chloe looks around. Dan and Lucifer listen outside. They listen on to all the cheesy pick-up lines Chloe hears. Chloe drops her microphone in her drink. Lucifer rushes inside.

Chloe zeroes in on a man named Benji. When Lucifer appears, Benji runs. They stop him. He thought she was paparazzi. They take him in. He went on a date with Esther, Kim’s roommate twice. He only went the 2nd time to see Kim. He liked her. He had nothing to do with her death.

Chloe thinks maybe Esther found out and is the killer. They review the photos. Chloe thinks that Esther hit Kim with a dumbbell. Meanwhile, Ella tries hiding from Charlotte, but Charlotte finds her. Charlotte wants to know why Ella doesn’t want to train her. Ella knows she is lying about the shadow program and yes when she talks to people she really does care.

Linda and Amenadiel are at the beach where she wants to throw a celebration of life for Reese. She tells Amenadiel she plans to have 350 people there. After a look by Amenadiel, she confesses she is overdoing it because she doesn’t feel bad about Reese’s’ death. And that is making her feel bad.

Lucifer and Chloe question Esther who is in her bikini. Lucifer makes her look into his eyes and tells her what she desires. She breaks, she is sick of posing and lying. She isn’t worldly and she doesn’t go on vacation anywhere. She tells them that Kim was planning on having surgery when her money comes in. Esther doesn’t know what she was talking about and she doesn’t care.

Chloe tries to find out where Kim would get money. Charlotte has some answers. Kim was the owner of Top Meet and Mack was just the face. They need to get a search warrant for Mack’s place. Chloe is going to pretend to be his type.

Lucifer stops my Mack’s. He wants to know if Mack wants to go to Vegas. Mack tells him he is busy with a lady. Chloe comes inside from the balcony with champagne in her hand. Lucifer gives her an eye. The two argue. Lucifer wants her to leave. Chloe tells Lucifer after Mack leaves the room that she is there for the murder weapon. Okay fine, he will help. Lucifer asks her where she looked. She lists a few places. What about the fireplace? She laughs but then looks. She finds the weapon.

Lucifer sits and talks to Linda. She confesses she was in a dark place but someone helped her gain perspective.

Ella commends Charlotte on helping with the case. She did well. She was offered another job with better pay but being around Ella and the gang is good for her. Ella looks nervous.

Lucifer asks his lady if she wants to play monopoly. She doesn’t. He seems happy and disappointed all in one.