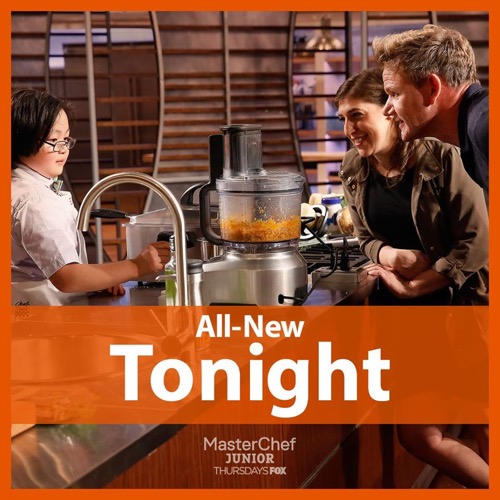 Tonight on FOX Gordon Ramsay’s Masterchef Junior continues with an all new Thursday, March 2, season 5 episode 4 called “Batter Hurry Up,” and we have your weekly Masterchef Junior recap below. On tonight’s Masterchef Junior episode as per the FOX synopsis, “The Top 18 cooks compete in two challenges, including one that splits them up into teams to make corn dogs, and another involving juicy burgers. Mayim Bialik is the guest judge.”

Their challenge is all about one of the most important skills; teamwork. Gordon says not everyone is competing in tonight’s challenge; the short sticks means you’re competing, grab a long stick and you will be cheering on those cooking.

Justise, Eddie, Lila, Gonzalo, Evan and Peyton are the 6 home cooks who need to compete. The cooks with the same color on their sticks are teammates. Justise is with Evan, Eddie is with Gonzalo, leaving Peyton with Eddie. They are cooking corndogs and given 10-minutes to make as many beautiful corndogs as they can.

The winning team will not have to compete in the next challenge. Gordon says there is more at stake than just saving themselves as a huge pipe lowers above Gordon and Christina’s heads. Christina says the winning team gets to decide who gets covered in goopy batter.

Eddie and Gonzalo made 0 correct corndogs; but the winning team had made 13 beautiful corndogs and that team was Peyton and Evan. They are to choose who will get the batter, and everyone chants “Gordon”. He bows his head and laughs; as the flour coats him and then he gets plastered in wet batter as every cheers and giggles.

The bonus is Evan and Peyton are guaranteed spots in the top 16, but before that happens Gordon says its only fair that the judges stick together and the flour and batter coat Christina too. After they clean up, they introduce their famous foodie and special judge, Mayim Bialik (Amy Farrah Fowler from The Big Bang Theory).

She says she cannot wait to see them all in action and Gordon tells them their challenge is an American Classic, a stunning burger. They all cheer and are excited at the dish; Gordon says they want a burger and side that really screams “you”. He says they have 45 minutes to get in the pantry for their ingredients and to make the best burgers of their lives.

As Gordon begins to count down, Mayim interrupts him saying she is the special guest and they are going to play by her rules. She shares an important thing about herself: she is Vegan, so their burgers have to be Vegan too. She has revamped the pantry with no animal products. No meat, no cheese, no eggs and absolutely no animal products of any kind!!

Gordon says they have all eaten burgers, so it will be interesting to see how they keep up the flavors in a meatless burger. Christina and Mayim talk about the texture of the burger, as it is one of the tougher things to do as a Vegan; the chemistry is what makes it pasty or weird, so its going to be a big challenge.

The young cooks are busy putting their dishes together. Christina and Gordon visit the cooks to see how they are doing. Shayne says he has never eaten anything without meat before while Jasmine admits her father is Vegan, so she should be able to make a dish the judges will love.

Adam says his mom is Turkish so he is making a Falafel burger while Sam is making a classic burger but its more Tex-Mex. Christina says he is one of the smallest in the competition but one of the most confident.

Eddie is missing for a few minutes and when he returns he still doesn’t say what he is making until Gordon says he will hand him upside down on a chandelier if doesn’t explain his burger. Eddie is upset that his burger keeps falling apart and Mayim says that always happens to vegan burgers. Gordon encourages him that he can do this in 4 minutes.

Gordon tells them to speed it up, and is worried about Sam when Cydney drops her burger on the floor during plating. She cries that this is her worst nightmare and she can’t go home, everyone’s eyes tear up as she doesn’t have time to make another one. She gets it together and puts stuff on the plate, hoping it could keep her in the MasterChef Kitchen.

Shayne “the Train” is up first and Gordon says it was a great burger; Mayim says the sauce was beautiful and he was very smart to use rice in the burger. Shayne confesses he doesn’t want to turn vegan.

Donovan brings up and Indian Spiced Burger and Bok Choy. Christina wanted the presentation to be a bit more refined and Mayim says she would have never thought of the Bok Choy side, but it works.

Justise admits she doesn’t eat vegan food because she doesn’t like it. Her side is good but the burger was a little too small and moist. Avani made a brussel sprouts burger with coleslaw; unfortunately it tastes too raw for the judges and fell short on the details.

Eddie made a chickpea Burger with potato chips. Gordon says the burger is crumbly, very dry and didn’t cook; but they love the potato chips a lot. Gordon commends him for sticking at it and for trying over and over. Cydney worries her dish is worse than Eddie’s. She made a cabbage burger and Gordon commends her for bouncing back when she dropped her burger in the last minute. Gordon likes that she thinks on her feet. Mayim says it is under done but the flavor is neat, the side is very LA’ish.

Adam is up with his Turkish Falafel Burger and the judges are impressed with the presentation. His side dish needed more time but it was tasty. The patty is well done and very creative.

Sam makes a red bell pepper burger, but it is burnt on both sides. They say the inside is too gooey because he used beans and rice; Gordon says he could have made two patties out of it. They didn’t like the balance on his coleslaw and Gordon is not impressed with him using just ketchup.

The number 2 burger was made by Adam and the number 1 burger goes to Shayne; which means they will be captains in the next team challenge.

Gordon calls Cydney, Sam, Avani and Eddie to the front. He tells them he is proud of all 4 of them, and no matter what happens they made it to the top 20 in the country. Cydney and Avani are told to go back to their stations while Sam and Eddie are told they just missed the mark on their vegan burgers. They are told to keep their aprons and hold their heads up high.