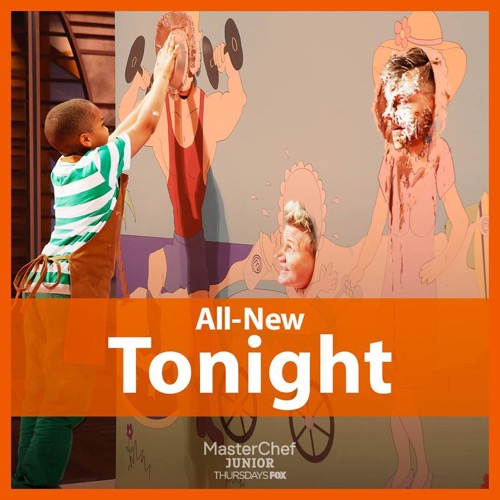 Tonight on FOX Gordon Ramsay’s Masterchef Junior continues with an all new Thursday, March 16, season 5 episode 7 called “Pie-Eyed,” and we have your weekly Masterchef Junior recap below. On tonight’s Masterchef Junior episode as per the FOX synopsis, “Richard Blais is the guest judge when the Top 12 cooks split up into teams of three and have 10 minutes to make as many pies as possible. Later, the contestants must use a blowtorch to make an appetizer, entrée or dessert using ingredients from the “MasterChef” pantry.”

MasterChef Jr. begins tonight with Chef Gordon Ramsay and Chef Christina Tosi welcoming the 12 young cooks to the Masterchef kitchen. The guest judge tonight is Chef Richard Blais, who tells the cooks he is excited to see their skill set in the upcoming culinary skills challenge.

Christina says they will will be competing in teams of 3; they will draw colored straws to see who their teammate is. The blue team is Mark, Lila and Syd. The brown team is Afnan, Justise and Evan. The yellow team is Peyton, Shayne and Cydney. The red team is Jasmine, Avani and Adam.

They learn from Christina this challenge is in her area of expertise. They are to make a Pistachio pudding pie. Each team will be responsible to assemble as many of the pies as possible, and then she does a presentation on how to make one.

Richard tells them they have 10 minutes to make picture perfect pies. Which ever team has the most pies done correctly, they are safe from elimination; but Richard says there is another reason to win this challenge. The team with the most MasterChef quality pies will get to through a pie into the face of all the judges.

Yellow had 8 pies, Blue had 12 pies, Red had 10 pies and finally the Brown team had 14 pies making Evan, Justise and Afnan safe from elimination and are told to chose a pie and bring it to the front of the kitchen. The judges place their faces into a pie smashing scene like at a fair.

Afnan smashes his into Richard’s face. Evan brings his up and smears it in Christina’s face. Justise brings her pie forward telling Gordon this pie is his worst nightmare. The brown team heads up to the balcony to eat a pie especially made for them from Christina.

Richard tells the remaining 9 that tonight’s dish starts with a showstopping tool. He reveals his favorite gadget to work with, which is the foundation for their next challenge. It is a blow-torch!

For the elimination challenge they must all use the torch to create a dish that will set their palates on fire. Richard shows the young cooks examples of how he makes one of his favorite appetizers using the torch. Gordon shows an entree with the torch and Christina shows them a dessert as well.

Gordon says their options are endless but they have 45 minutes to create their dish. Christina says if they can’t stand the heat, they will be leaving the kitchen; but sadly 2 cooks will go home tonight.

The cooks are running through the pantry grabbing their ingredients to make the best blow-torch dish ever; a lot of them being nervous because they never used the torch before.

During preparations Jasmine drops some cupcakes, runs back to get a plate and falls sliding face first into the cupboard. She begins to cry but runs to get another plate and continues. The rest of the young cooks are doing a great job.

Jasmine made s’more cupcakes and actual s’mores. Christina says the plate has fallen short, but she loves that Jasmine was adamant her cupcake was baked properly. Gordon says she is a talented cook but she made a very poor choice tonight, because tonight’s objective was the blow-torch and this could possibly be her last dish.

Adam made steak crostini with roasted bell pepper cream cheese and herb salad. The dish is delicious but Gordon points out that he needs to taste his food. Richard says he made a restaurant quality dish.

Avani is nervous but she made a chocolate ganache tart with caramelized pecans and bananas. She used the torch on the marshmallows, pecans and banana. Christina tells her honestly that its delicious, an elegant dish and the best one they have seen from her yet. Gordon says she may be the youngest but she is one of the strongest cooks right now.

Lila made chicken enchiladas with tomatillo sauce with black beans. Richard tells her that her dish is incredibly smart with the deep roasted flavors. He tells her it is a really good dish. Christina wants to see her work more on presentation and bring the Lila twist to her dishes.

Mark brings up a deconstructed s’more with brulee strawberry sauce and dark chocolate and coffee mousse. Richard says he loves the choice of ingredients but suggests he could have focused on presentation more.

Peyton made jerk chicken with coconut rice and sauteed bok choy, she used torch on peaches, pineapple and to finish off the chicken. Christina says the rice needed to cook a few minutes longer, but over all good job.

Syd’s dish is orange glazed chicken with butter lettuce and torched tomatoes. Gordon says the chicken is undercooked, and bland. He says the vegetables are great but the challenge was to use the torch and she didn’t use it enough on her dish.

Cydney brings up a crème brulee with fruit and a strawberry-raspberry sauce. Christina asks if she is crazy for making a brulee in 45 minutes. She says it is nearly perfect, she burnt the sugar a little bit and the presentation is a little messy.

Gordon arrives and keeps eating it, saying it is as smooth as a baby’s bum and one of the best crème brulees they had all year. He says the side looks like she shot her pet rabbit, but loved her dish.

Shayne made steak enchiladas with guacamole and cheese crisp tortilla. Gordon says it is just a soggy, gloopey, disgusting mess and pours out the grease calling it gross.

He cuts it open and says it tastes better than it looks, the steak is cooked perfectly and seasoning is spot on but it is one of the worst dishes of the evening because he knows he can cook much better than that. Richard says the dish was greasy and doesn’t look good and reminds him that he doesn’t have this in the bag.

The winning dish belongs to 8 year old Avani; Jasmine, Mark, Syd and Shayne are called forward as the bottom 4 for tonight and since it is elimination two are going home. Jasmine and Syd are both eliminated as Mark and Shayne are told to return to their stations.

Gordon tells them the journey is more important than the winning.