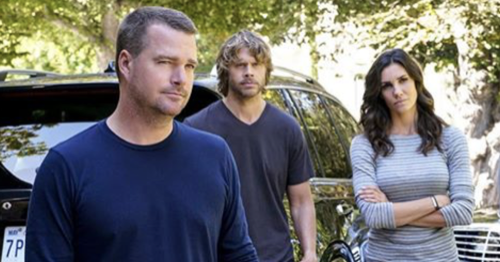 Tonight on CBS NCIS: Los Angeles returns with an all-new Sunday, November 19, 2017, season 9 episode 9 called, “Fool Me Twice” and we have your weekly NCIS: Los Angeles recap below. On tonight’s NCIS Los Angeles episode, as per the CBS synopsis, “Callen and the team question CIA Agent Joelle Taylor’s backstory after she escapes from a kidnapping and turns to Callen for help.”

Callen’s ex Joelle came looking for him on tonight’s all-new episode because she needed his help figuring out who kidnapped her.

Joelle said she left the CIA six months ago. She had apparently grown disenchanted with the organization after they turned her onto Callen and so she left to spend time with her family. But Joelle also claimed that she started to let her guard down not long into her retirement. She said it happen gradually and that it became easier as she dropped her son off at school every day. So Joelle said that it was after one of these drop-offs that a group of masked men grabbed her and threw her in a van however she never saw any of their faces and she had only talked to one of her kidnappers because he had wanted information.

The kidnapper had allegedly asked Joelle about naval intelligence and security. But Joelle admitted that had offered up what she had because she said it was months out of date and wouldn’t have made a difference. So what Joelle wanted to know was who took her and why because she thought they were a danger to her family. She had a husband and a child that didn’t know the specifics about what she did or at least used to do yet they understood that sometimes she would be gone without a moment’s notice and so she knew that they hadn’t been worried about her in the forty-eight hours she went missing. And had wanted them moved before anything happened to them.

Joelle hadn’t been let go. She had escaped from an abandoned warehouse by killing most of the people that kept her captive and knew that there were more out there that had to be looking for her. But neither Callen nor his team trusted Joelle. She had betrayed them all once before and so they were hesitated to believe her tale of kidnap and escape. It had just seemed a little too fantastical for them and so they decided to treat her story with as much caution as possible because they weren’t sure if she was leading them to a trap. So Callen took Joelle to see her family and convince them to go with Kensi and Deeks, but afterward, she went with Callen.

Callen had taken Joelle back to Sam’s boat because that was the one place no one would look for Joelle. But Sam and Hidoko had gone to check out the warehouse where Joelle had said she had been held and they walked right into a trap. The door had closed in behind them and the building had been set on fire. So they would have been killed if they hadn’t found the escape door and both of them hadn’t been sure if the trap had been meant for Joelle or them though they talked to Callen about what happened and he had been more inclined to distrust Joelle rather than give her the benefit of the doubt.

Callen was still upset about what happened between them and that he hadn’t really known her at all. But Joelle or Beth as her family calls her hadn’t cared whether or not Callen trusted her because she said all she wanted was to keep her family safe. So Joelle eventually came clean about a few things she lied about. She admitted that she hadn’t technically left the CIA because she hadn’t wanted them to know that the rogue group she had once been part of had been behind her kidnapping. She said that the man behind the curtain had wanted to rebuild the group and that he threatened to kill her if she wouldn’t be rejoined. And she didn’t want to get dragged back in.

Joelle had left the group and she was on administrative leave while the CIA decided on what to do with her. But Joelle hadn’t lied when she said she was concerned about her family and so that had been enough to convince Callen. Callen had seen how much Joelle loved her family even if her marriage was in trouble and her husband had cheated on her. So the others went back to investigating and they found out the warehouse had been owned by the Manticore Mining Group which happened to have staked all over the Middle East. And so both Kensi and Deeks had gone in undercover at the company because they knew Joelle could at best verify one voice.

Joelle heard one person give the others orders and so she knew that could identify it if she heard it again. But somehow the armed men found them in the parking lot and they tried to kill Joelle before she could identify the voice. So the others held the men off while Joelle went running into the building. She had heard a familiar voice through Kensi’s command so she knew the men attempting to blow up her life was inside, but she had found out the voice hadn’t been CIA. He had just been a corrupt businessman that worked with others like himself to create a syndicate and Leach had had something to say to Joelle when he saw her again.

Leach claimed the syndicate was never going to let her because they had found a way to use the CIA for their own business interests and would never give that up. But Leach had shot Joelle and so Callen had been forced to kill him before they could gain anything else from him. So Joelle had to be rushed to the hospital and she realized that she could use her injury to her own benefit. She decided to fake her death because that was the only way to protect her family from the syndicate and it allowed Joelle the chance to hunt down other members of the group before they could hurt anyone else.

And Joelle had asked Callen if he wanted to join her, but he turned down the offer because he said he had his own family to protect.