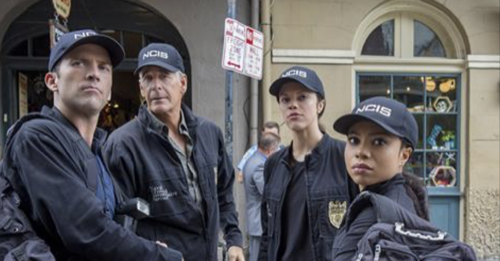 Tonight on CBS NCIS: New Orleans returns with an all-new Tuesday, October 17, 2017, season 4 episode 4 called, “Dead Man Calling,” and we have your NCIS: New Orleans recap below. On tonight’s NCIS: New Orleans Premiere episode as per the CBS synopsis, “The NCIS team investigates the copycat murder of an unsolved case from 150 years ago that spawned a legendary New Orleans ghost story. Meanwhile, Gregorio gets spooked when the case is connected to a recent séance and a local medium.”

The death of Cornelius LaRue was a well-known ghost story in New Orleans. Most heard about the Confederate sailor and how his death had remained a mystery. The man had fallen from a rooftop 150 years ago and some say his ghost haunts the quarter because he had been murdered. But Pride and his team hadn’t paid much attention to these ghost stories until Petty Officer Jacob Anderson fell from the same roof on the anniversary of Cornelius’s death. That had seemed like too much of a coincidence for some on the team, however, others just wanted to investigate Anderson’s death and so they looked on the rooftop.

But up there had been a mess. There was tarp, paint, and debris everywhere and so Sebastian hadn’t gotten much though he did find a few interesting pieces of evidence. He had found the door wide open when he went up there and so that explained how Anderson had gotten up there as well just not why. So the other thing Sebastian found could explain that. Sebastian had spotted two sets of footprints on the roof and there appeared to be a fight so someone had been waiting for Anderson. They probably thought they could get rid of him without a problem except he put up a fight.

Anderson had had defensive wounds on him that wasn’t connected to the fall and so that proved he had been in a fight before his fall. But NCIS didn’t know if he had been pushed or if he had simply fallen over in the confusion. So they needed to talk to the second person involved and funnily enough, no one had wanted to come forward to say they were the last person that saw him, but NCIS had later answered a phone call on Anderson’s phone from a very worried sister. Brandy Anderson had come to town to help her brother put their late grandmother’s affairs in order and she had gotten worried about him when she saw that their grandmother’s place had been trashed.

Someone had broken in and ransacked the place. But what they hadn’t touched was the séance circle Anderson must have been using to contact his late grandmother and so Sebastian ran fingerprints from the scene. He found out that Anderson had performed the séance with a con-artist named Otis. Otis has claimed in the past to be a psychic and people eventually figured out he was pulling their leg. So Otis was a good suspect because Anderson could have been questioning the séance and whether Otis was, in fact, a psychic yet what also made Otis look suspicious was the fact he had been at the crime scene.

Gregorio had remembered Otis because she had told him countless times to stay behind the yellow line and he had still tried to get close to the body. But that didn’t explain why he would stick around if he had done the deed. So Pride had sent Gregorio and the others to go question Otis and just their luck he had been running a Haunted House at a mortuary. Those type of things were a big sell in New Orleans and so the others hadn’t mind going after him however Gregorio was frightened of those things. She didn’t like ghosts, haunted houses, or people that could commune with the dead because it scared her more than anything else. And so Sebastian had had fun teasing her.

Sebastian was the one that was usually scared out in the field and so hearing Gregorio scream because a Halloween decoration jumped out at her had been funny! But the two found Otis hosting the thing and they eventually caught him with the help of Percy and LaSalle. So Percy and LaSalle had managed to put aside their problems with each other and focus on the case, but everyone noticed the tension and it was at the back of their mind when NCIS got the chance to questions, Otis. They had asked Otis about the séance and why he had been at the crime scene. And he told them that he had the grandmother’s spirit.

Otis admitted that in the past he had been a fraud. But he said that he wasn’t playing around anymore because the grandmother had been the one to find him and not the other way around. Otis said that the grandmother had wanted to tell Anderson about an old family secret and that he was helping Anderson figure out what it was yet Otis also added that he had an alibi for Anderson’s death because he was seeing his probation officer. So NCIS started to take him a little more serious about this family secret. They thought Anderson was looking into something that might have gotten him killed and what they couldn’t understand was why all roads led back to LaRue.

Anderson had had spores on him when he died that were at least a 150 years old and NCIS had also learned Anderson had visited LaRue’s crypt. But the team didn’t understand the connection so they retraced all of Anderson’s steps. He had gone to the home of the Prescotts and NCIS had wanted to ask them about Anderson though Tessa Edgar Prescott was confused because she said they were already speaking to a NCIS Agent. So Percy and LaSalle went in to find out who she was talking about and it turns out the Prescotts had been speaking with Otis. Otis told them that he was helping NCIS and he said that the wealthy couple had just assumed that meant he was an agent.

But before the real agents could take him to tasks, Otis began hearing both Grandma Anderson and Jacob. So he looked at the mantle in the Prescotts’ home and he found a picture of Tessa’s ancestor with the one and only Cornelius LaRue. The two men had apparently known each other back in the day and so NCIS knew LaRue’s death was at the heart of their investigation. Anderson had been looking into him and possibly his death when it led to his own so Pride went to go to Brandy. Brandy was the only other Anderson around that could give them information and so Pride had asked her about the family secret while Gregorio and Sebastian went to the archives.

The archives had revealed what Pride found at the house. The great family secret had been Cornelius LaRue being their ancestor. It turns out he had a family and his son had changed his came from LaRue to Anderson to distance himself from the legend that surrounded his father. But what Pride found had been a letter that Cornelius’s widow had sent in which she asks for help in proving that her husband was murdered. So Anderson had been trying to figure out why anyone had murdered his ancestor when he had been killed and the best suspect had been whoever set fire to the archives while Sebastian and Gregorio had been there.

Thankfully, the two agents had made it alive and unharmed. But that fire more than proved that someone was trying to hide what happened to Cornelius LaRue. So they looked into LaRue and found out that he had just come back to New Orleans after Medical school when he died, but finding out he had gone to medical school had put the pieces together for Pride. Pride had pulled up the old picture of LaRue and Tessa’s ancestor and the men had been shaking hands in front of an apothecary. That same apothecary would become the start of many pharmacies that became the Edgar family fortune and so Pride realized that the handshake between the two men could have been more.

Pride told his team that the photo had looked like two people going into business together and if so that meant the Andersons deserved half of the Edgar fortune. So Tessa Prescott had been questioned about what she knew and later why the tires from her Lexus had been at the crime scene. But Tessa couldn’t explain that because she said she hadn’t taken her car out that night and so NCIS looked for it, however, the car was missing and so was Tessa’s husband. Her husband Tate had found out about the secret and that Anderson was going to uncover it so he killed Anderson to stop the truth from coming out.

Except there was no stopping the truth. LaSalle and Gregorio had figured out Anderson noticed the photo of LaRue and Edgar had been taken from the rooftop of the building across the street and so they had gone there wanting to know what Anderson was looking for when they ran into Tate Prescott. He had seen how close the agents were getting and had tried to kill them yet he took a tumble off the roof when couldn’t take the both of them on. So Tate ended up being just another part of legend because he had died where both LaRue and Anderson had passed, but LaSalle and Percy did at least know why he had wanted to stop them from looking from the rooftop.

The rooftop gave a perfect view to the mosaic on the floor of what used to be the apothecary. Edgar and LaRue had buried the deeds to the place underneath the mosaic and so there was proof that the two of them had been business partners. But Pride left it to Tessa Edgar’s conscience to do what was right and she didn’t disappoint. She went over to the Anderson home and introduced herself to Brady Anderson that had suffered so much because of what her ancestor had put in motion.