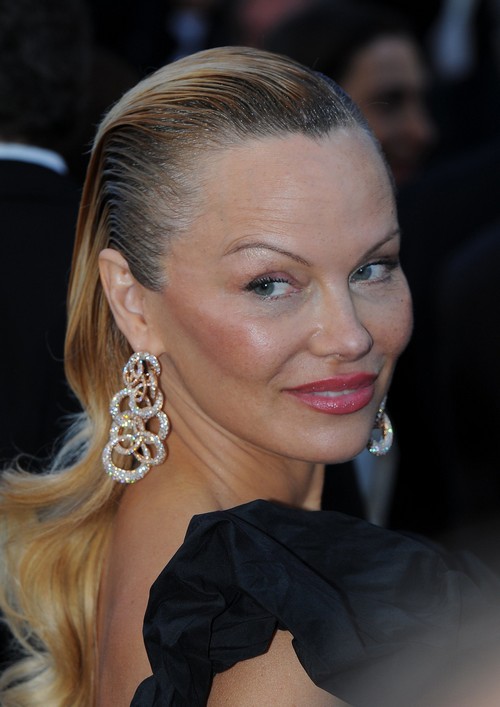 Pamela Anderson sported a different look at the Cannes Film Festival, one reeked of plastic surgery according to photos. The former Baywatch star looked unrecognizable when she made an appearance at the 120 Beats Per Minute premiere on Saturday, May 20. Some fans thought Pamela went under the knife to change her looks. Her face looked pulled back since she slicked back her famous blonde hair away from her face.

Pamela wore a navy-blue Vivienne Westwood gown that featured ruffles. The gown also featured a plunging neckline that showed off Pamela’s cleavage. The ruching mad her waist appear tiny with more ruching around her hips to exaggerate her hourglass shape. The gown felt the floor and had a small train as Pamela made her way down the red carpet. Some didn’t recognize the actress at first. Not until she opened her opened mouth or cracked her famous smile.

She wore her blonde hair slicked back. Pamela Anderson looked far from the Baywatch star who blew up the TV screen in the 90s. She paired her red carpet look with diamond earrings and stacked diamond bracelets. Some would say that Anderson’s look was a little bizarre. According to Page Six, her look was a little more toned down than usual. Anderson was praised for her low-key look. She also stopped to pose with fans who were hanging out on the sidelines of the red carpet. 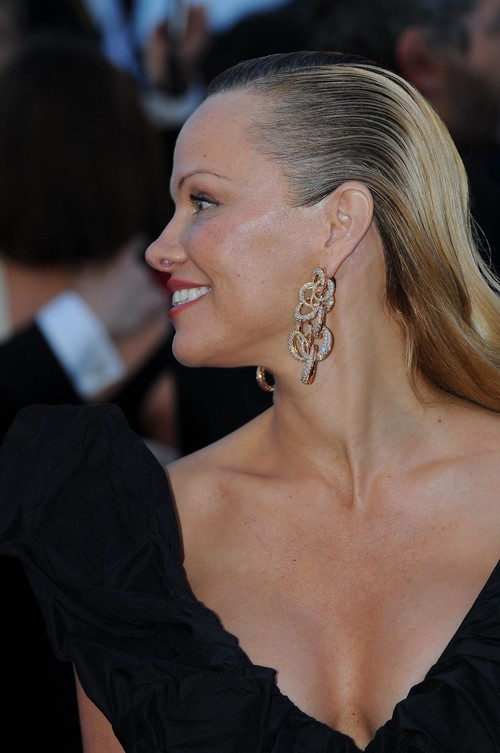 Her red-carpet look was a difference to her red-carpet appearance at the same film festival 10 years ago in 2007. Pamela used to live a wild lifestyle. She was known for her sexy photo shoots, scandalous red-carpet looks, and outrageous on-camera behavior. But, these days, Pamela wants to be taken more seriously. She will make a return to the small screen, though. She signed on for a brief cameo in the Baywatch reboot which stars Zac Efron and Dwayne “The Rock” Johnson.

She previously sparked the plastic surgery rumors at the Best Awards Gala in Paris back in January. Some noticed that she looked different from the blonde bombshell she was in the past. Though it looks like Anderson has been toning down her looks by ditching her signature eyeliner and no longer wearing her blonde hair around her face, reports Life & Style Magazine.

The 49-year-old has been honest about going under the knife in the past. But, in her interview with W Magazine, she said that she has embraced the aging process. Pamela also credits her newfound happiness for her appearance. She says she feels a lot happier and calmer these days. What are your thoughts, CDL readers? Do you think Pamela Anderson had plastic surgery? Sound off below in the comments section.