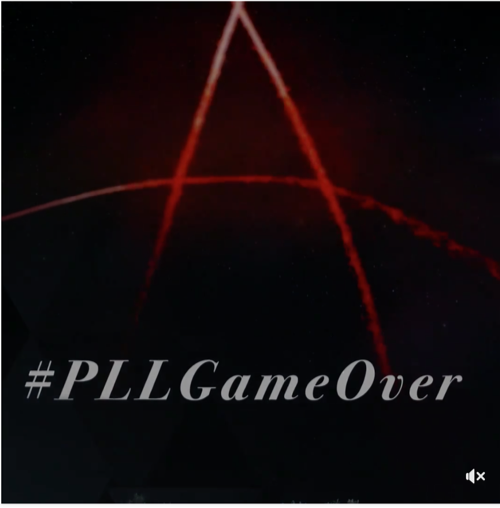 The girls are all sitting around at an outside café talking. Lucas taps by. Followed by a woman on a horse. They talk about how they miss “A” a lot. Snowflakes begin to fall. Mona is looking in a snow globe. The door to her hospital room opens. She drops it after seeing the person in the door. She asks the mysterious man if he is here to kill her.

Aria and Ezra are walking on the studio lot. His book is about to become a movie. They are about to get married. Meanwhile, Emily is feeding the twins. Allison comes in. She says goodbye to her family and heads to a hotel. She meets Emily’s mom without her knowledge.

Spencer and Melissa are brushing the horses. Toby shows up. Spencer is thrilled. They hug. Spencer’s rescue horse takes well to Toby. She offers him a lift back to town.

Ally is teaching her class about the book Then and Now, Ezra’s book. Addison gets out of line when she reveals that Aria stole Ezra from Nicole. Ally warns her after class ends. In the hall, Emily and Ally see Claire, a student who is being bullied.

Hanna and Caleb are fighting over Mona. Caleb thinks they are doing great and Hanna needs to let Mona go, to deal with her own problems. Mona arrives. They hug. Hanna reminds her that they have Ezra and Aria’s bachelor/ette parties.

At the Lost Woods Resort, the gang gets together to have dinner outside near the lake. Mona is supposed to be watching TV at Hanna’s, but she isn’t there. Melissa looms in the trees watching the gang in a dark hood.

The gang hangs out around a fire talking about the wedding. Spencer pulls Hanna aside to ask her what her and Caleb’s problem is. Hanna tells her it is over Mona and how she is living with them. They all call it a night besides Toby and Spencer, who go back to his room. They talk about how much Spencer’s life has changed as they play a board game. Spencer is a paralegal at her mom’s firm and she is going to law school now. She is also getting along with Melissa.

Hanna has her legs up, telling Caleb she is trying to get pregnant. All he wants to talk about is Mona. Aria gets a call in the middle of the night. Melissa is outside her house watching her.

Toby has fallen asleep. Spencer leaves his room and hears Aria crying in the living room. She tells her that she cannot marry Ezra. Outside Melissa peels off her face, it is Mona! All of the girls meet to talk to Aria. Spencer tells Aria that she needs to come clean to Ezra, but she says she can’t. Mona is outside on the cell phone talking to a mysterious person on the phone.

The next day, Aria and Ezra are talking when she confesses she thought she was pregnant. But she ended up finding out that she can’t have kids. Hanna and Caleb arrive home to find Mona. Spencer goes to visit Mary in jail. She calls her mom. Ezra tells Aria that they will get through. Spencer tells Mary she needs her help.

At Ezra’s rehearsal dinner, Hanna arrives with Caleb and Mona. All of the girls are angry that Mona is there. Aria’s father tells Ezra that he gives him his blessing even if it is a little late. Meanwhile, Aria is having a hard time getting along with Ezra’s controlling mother.

Toby asks Em when he will get to meet the kids. Em sees some of her students. They tell her that Addison is nice to them.

Hanna’s mom tells her she is wrong about Mona, but she is still on her side. Ezra asks Aria if she didn’t look like she was going to burst into tears at the mention of their wedding he would feel better. Ezra wants her to have faith in him like he does her. He goes to bed.

Emily asks Ally what her mother put in her purse. Ally shows her – it is a ring. Ally proposes to her. Meanwhile, Hanna tries to talk to Caleb. She tells him that she is going to tell Mona in the morning that it isn’t going to work out.

Someone knocks at Toby’s hotel room. It’s Spencer. She kisses him. They make their way into his hotel room. Spencer gets out of the shower. Someone is playing the piano. Mona comes out of the dark corner and strikes her in the head, telling her, “Deja vu bitch.”

Spencer wakes up enclosed in a room. She sees herself in the mirror. Her reflection is making different body movements then her. Mary comes in and stabs her with a needle. An officer visits Em and Ally, telling them that Mary has escaped.

Spencer comes to. She sees her twin, who has an English accent. Her name is Alex Straight. Wren met her at a bar and thought she was Spencer. Alex came to Rosewood after hearing about Charlotte. Alex tells her all of the times she tricked Spencer and her friends. She made good on the game and went back to London, but she had to come back. She was jealous that Spencer got it all. She begged Wren to shoot her. He did. But she confesses that he is dead now. She turned his ashes into an eternity stone. She leaves Spencer to go get ready for the wedding.

All of the girls get together with Aria. She is getting ready for her wedding. They all look at her in her dress. They take pictures. Alex holds one of the twins telling the baby that she has Wren’s eyes – her daddy’s eyes. Mary brings Spencer lunch in her cell. She sits outside with her own plate and eats. Spencer asks Mary where they are. Mary doesn’t know. She was drugged and brought there too. Mary had twins and sold Alex. It was her ticket out of Radley. Mary found out where she was when she was 10. She was left at an orphanage. Mary opens the door and hugs Spencer.

Spencer manages to get a hair pin. Meanwhile, Aria is crying. Ezra is a no show, he texted Aria he is not coming. Her father will take care of the guests. Spencer discovers she has a cellmate – it’s Ezra. She asks him if he is okay – his head is bleeding and he is missing his wedding. That night, Aria is sitting alone in the hotel. She is sad. Hanna, Em and Ally are all going to stay with her.

Spencer is trying to pick the lock. Alex shows up. She stops. Alex tells her about meeting Charlotte thanks to Wren. Charlotte, Archer, Wren and Alex spent so much time together. Alex wanted to meet the Hastings, but Charlotte wouldn’t let her go. Charlotte never came back to London. Alex starts crying. She saw Charlotte next at her grave.

Alex goes to see the girls, posing as Spencer. She slides into bed next to a sleeping Aria. The next day, Alex approaches Spencer’s horse. He isn’t trusting and jumps up. Toby shows up. She tells him that they should leave, the horse is having a bad day.

A concierge shows up at Aria’s. He is looking for Mrs. Fitz. Ezra booked them a hot air balloon. It doesn’t make sense if he was going to leave her.

Jenna runs into Spencer. She smells different. Jenna calls Toby to tell her that it isn’t Spencer. Toby shows up at Aria’s to tell them something is up. They all brainstorm who and what. They come to the conclusion that Spencer may have an evil twin. Mona is listening in.

Alex is outside, yelling at Mary. She needs to take care of Spencer. She picks an axe off the wall. Mona shows up at Aria’s. She tells them Wren came to see her. She was playing the game. She knows where they are. Meanwhile, Spencer frees herself and Ezra. Alex is right behind them with an axe. They make it outside, but realize the trees are fake. They are still underground.

Alex yells to them – there is nowhere to hide. The gang is coming into the house after locating the address. Alex catches up to Spencer. They fight. Toby and the rest of them show up. Toby points a gun at Alex and Spencer and can’t figure out who is who. He asks the real Spencer what is the poem from his favorite book. Alex is taken away by the police. Mona called 911 in advance.

The next day, Aria and Ezra marry in the church in a small wedding. The gang watches happily. A phone beeps. They all look alarmed. It is the photographers. After the wedding, before the honeymoon, the girls all walk together, talking. Toby is sticking around. Hanna can’t believe they are all happy at the same time. Hanna is pregnant! Aria is happy for her. She and Ezra are planning on adopting as soon as they get back. Aria is headed off. They all begin crying and hug.

Meanwhile, Mona is in France. She has her own shop and underground she is hiding a secret – Alex and Mary, her new little puppets. A new generation of Pretty Little Liars begins on a dark and stormy night when Addison goes missing.