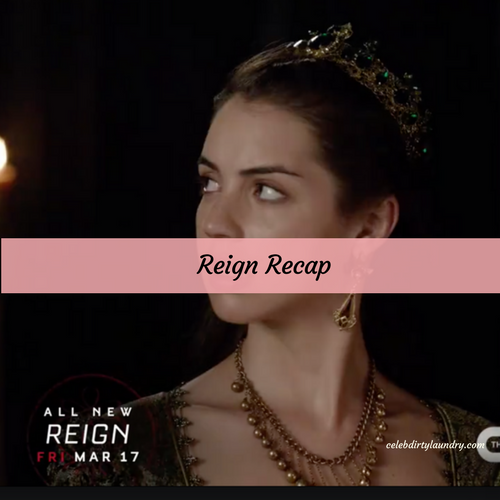 Reign on the CW continues tonight with an all new Friday, March 17, season 4 episode 5 called “”Highland Games,” and we have your weekly Reign recap below. On tonight’s Reign’s episode as per the CW synopsis, “Lord Darnley must prove himself to Mary in order to get her to accept his marriage proposal. Elsewhere, Catherine and Narcisse have to do damage control after rumors spread regarding Charles’ eccentric behavior.

So make sure to bookmark this spot and come back between 8 PM – 9 PM for our Reign recap.  While you wait for our recap make sure to check out all our Reign photos, news, pics, videos, recaps & more, right here!

Reign begins tonight with a mother enjoying a picnic with her son Adrian when he vanishes into the forest. Catherine (Megan Follows) and Lord Narcisse (Craig Paker) reveal to King Charles (Spencer MacPherson) that he is the one who took the child, not a bear nor wolf. When he denies it was him, she reminds him of his servants who see him return from those very words with blood on his mouth.

Narcisse reveals he overheard two Dukes discussing whether they should use a silver bullet or a stake to cure the King; Charles says that is treason but Catherine says the real threat is his sister Queen Leesa (Anastasia Phillips); if she thinks he is possessed, there will be no bargaining or discussion; she will send in the Spanish army for an Inquisition where not even the King will be safe.

Catherine and Narcisse say they will find the beast but King Charles needs to make some regal appearances, ceremonies and accommodations. He agrees to try; Narcisse leaves to make the arrangements and Catherine asks him what is wrong.

Queen Mary (Adelaide Kane) and her brother James (Doan Jeannotte) walk as the villagers prepare for the Highland games; more now than ever because their rightful Queen is back in Scotland but also because of her impending engagement to Lord Darnley (Will Kemp).

James says the commoners eagerly accept Darnley, but the nobles are not so quickly swayed. James says she should not openly decalre her intent for the English throne as Queen Elizabeth (Rachel Skarsten) will see it as an act of war. James tells her to take her time choosing the man she marries, she shows James the letter from whomever agrees with him. She asks to find who sent it; but James asks if she thinks its true, she says it doesn’t matter, she needs to marry him for the English throne.

Narcisse barges into Princess Claude (Rose Williams) and Luc (Steve Lund) on their wedding morning. He takes Luc aside and tells him that Leith (Jonathan Keltz) is alive in the dungeon. Luc is to release him and tell Claude he is alive; and as a good man releasing him will allow his wife to see him in a good light. Narcisse tells him to blame everything on him. Luc promises to release and tell Claude because its the right thing to do.

Mary greets her subjects, sharing history of the Highland games and announces her engagement to Lord Darnley, sharing his English heritage. She promises they will defeat the bastards who fight against them. One subject, Lord Taylor steps forward and says he will have a boxing match with Darnley and if he wins he will go on bended knee, but if he wins than Darnley will withdrawn his engagement to Mary; to her shock, he accepts.

As Darnley continues with his positivity, that there is no way he can lose, Mary asks James to leave them and she confronts him about starting the fire, and saved the child only to gave people’s trust and win people to his side. He actually admits he did it or their marriage. He tells her they have battles to win and the last thing she wants is a reluctant partner at her side. She forgives this deception, but will never accept it again.

Greer (Celine Sinden) is thrilled to see her husband and daughter, Rose; but her husband doesn’t seem so pleased to be back at court; living on the property once owned by Lola and her family.

Luc comes to see his wife, Claude and when he explains that Leith is in the castle, she bolts past Luc to go see him. Their reunion is sweet and even though he acknowledges she is married to Luc, she says she will be with him, whatever it takes.

Mary ups the curtains in Lord Darnley’s room, telling him to get up as her brother is going to train him for his fight with Lord Taylor. She says she wants to see if he can fight so she knows her odds.

As Mary and James prepare for the training, James brings up that Emily Knox (Claire Hunter) is tormented with guilt and if they continue, she might confess everything to John Knox (Jonathan Goad) himself; ruining their chance of spying on him. She says they will find another way. Darnley (Henry) spars with James and knocks him down in the first punch.

Catherine is furious Narcisses locked Leith in the dungeon, saying Claude and Luc’s marriage was a fraud and it can be annulled. She begs him to do this for each others happiness. She admits she will always love another; he says he will say he was too drunk to perform and they never consummated.

Taylor confronts Darnley about poisoning his flask; Darnley denies it and offers to fight right now. Taylor says he isn’t worthy of the Scottish throne. Once Taylor and his men leave, Mary accuses Darnley of doing it, who denies it and she wonders what kind of king she has chosen.

Greer spends time with Mary, saying she needs to give Darnley a chance. Mary gives her jewelry that will make her husband Castleroy pay more attention to her. Mary pushes her to talk to her husband and hopes both Castleroy and Darnley will be better men.

Naricisse’s mother finds him at a pub drinking; she had expected him to be by Mary’s side, winning over the Scottish people. She says he never wanted power, but he hates how Mary controls him and he will just be a man to her, a pawn.

Claude wakes up Leith in his own bed. He is shocked to learn that Luc has agreed that their marriage was never consummated and Charles has granted the annulment and now they can be together. Leith says Luc is a decent guy. Claude agrees and explains that she either had to marry Leith or go to a nunnery. As hey are beginning to make love he sees her wedding ring and she offers to just hold her for tonight.

King Charles meets with the villagers revealing they have caught the bear who took the child and killed him; the villagers throw blood on him, not believing him and he runs off covered in blood, as his mother calls for him.

Greer talks to Castleroy, who insists there is nothing wrong. He says it isn’t about Rose nor Greer; he has fallen in love with a widow who works at the estate. Greer releases him of their marriage, and won’t deny him of love. She is forever in his debt.

Emily comes to see James at the castle, saying if she is destine to hell for all eternity for just the thoughts, then there is no reason to resist his touch. He says no one must know.

Narcisse says he is Lord Chancellor of France and he will not allow an annulment especially since he says them both the following morning in bed. He also tells Luc that King Charles is not in the right frame of mind to deal with such things and Claude will get over her love for Leith. He openly admits he is doing this for his own power, as when he dies it will protect Luc and his descendants too, He orders him to not let Claude go.

Narcisse tells Catherine they found King Charles hiding in a cave, but no one is bringing him back because they don’t know what or who he is and what he is capable of. They think he is a monster who will attack them, but he has agreed to see Catherine alone.

Mary learns that at the infirmary many have taken ill with food poisoning, including Lord Taylor. She returns to Darnley’s chambers to see his hand all bandaged up. She apologizes for her doubts, and being wrong for accusing him of spiking Taylor’s flask. She wants to call off the fight and arrest the man who did this to him; he said he is going to fight like this, rather than look like a coward.

In her bed chambers, Claude meets with both Luc and Leith. Luc says his father will not agree to the annulment and since Charles has run off sick; the marriage will stick. Leith agrees but Claude says they will run away together.

Leith says she can’t live as a commoner and Luc says if she does run away, her sister will place her in a nunnery for infidelity and Leith in prison for abduction. Luc proposes an open marriage, so he can sleep with whomever he wants and Leith and Claude can sneak around all they want.

Luc says as long as Claude gives him 2 or 3 heirs, he vows that they can live their lives out together. She asks if Leith will agree to the terms; he says he cannot share the woman he loves.

Darnley and Taylor have their boxing match, Darnley looks up at Mary and James, gets up and continues to fight. Mary stops the fight to attend to Darnley’s wounds. She places metal in his wrapping and he knocks out Taylor. Darnley says he sees he isn’t the only one willing to break the rules; Mary says she wanted to even the odds and understands that now. As everyone bows down to them, he grabs Mary and shares a passionate kiss with her, followed by villagers’ cheers.

Charles shares with Catherine that he is reliving the horror and survival him and his friend endured, eating raw squirrels and dirt to survive until his friend was roasted alive; its the only thing that brings him solace. Catherine offers to bring him home and they can fix this; he says it is too late. He should have never become king. He runs off and Catherine chases him but he keeps going, leaving er laying in the dirt of the forest.