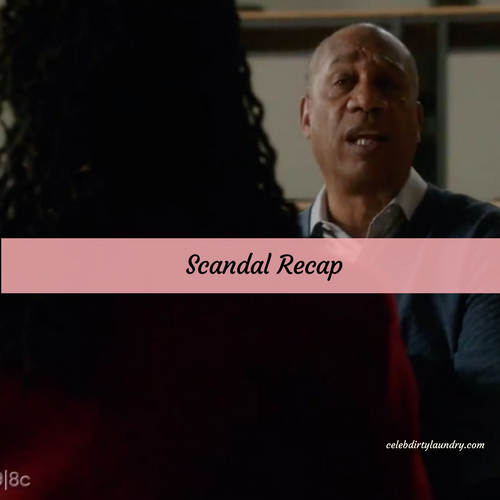 Tonight on ABC Scandal starring Kerry Washington continues with another exciting episode in an all new Thursday, March 16, season 6 episode 6 called, “Extinction,” and we have the Scandal recap for you below. On tonight’s Scandal season 6 episode 6 as per the ABC synopsis, “Rowan is caught off guard by someone from his past. Meanwhile, Olivia (Kerry Washington) faces a momentous decision regarding the campaign; and flashbacks spotlight the details of Francisco Vargas’ assassination.”

It’s 53 days before the election. Eli is eating breakfast. A package comes. There is a miniature plastic dinosaur in the box. He goes to visit an old classmate, Sandra, sitting in on one of her lectures. She is a scientist and she is back for good with a new lab and news that she has discovered dinosaur bones. She wants him to be her partner.

Olivia shows up at Eli’s. She tells her dad that Mellie is sleeping with Harrison.  What does she do? He doesn’t have time for play acting. Eyes on the prize, baby. Everyone you love is a weakness, he tells her.

At the lab, Eli notices a hidden camera eye while he moves the fossils around and keeps the workers in check.

Sandra is clean, an investigator tells Eli. The investor doesn’t exist though. Eli goes to Olivia’s. He needs a record, Marvin Gay. She lets him in even though she is busy. While she looks, he looks for bugs around her house. He spots a black SUV outside. Olivia tells him it is the secret service. They have also been doing bug sweeps each week.

Eli plays Marvin Gay at the lab with cocktails ready. Sandra comes in. They reminisce over their younger years. He comes on to her. He leads her to the closet. He puts a gun to her head. He wants to know what they want. Who are they? They threatened to kill her if she didn’t lure him. She cries. She has no idea who they are. He exits the closet. He stands in the middle of the room and yells to the eye in the sky  – “you want to talk to me. I am right here!”

Three people come out. Eli threatens to kill them all. One of the men shoots his cohort. He sits down. He wants Mellie in the white house or Sandra will be harmed. They agree to a deal. The man and woman leave. Eli tells Sandra that he has her. He will keep her safe. They kiss.

The next day. Eli is stressed over what he must do. He works with Adam to set up Vargas. He needs a win somehow. Adam suggests voting machines. Eli instructs him to start with San Benito.

Eli eats breakfast as he looks through a work notebook. Olivia shows up. She knows about the voting machines. She is mad. She wanted to earn it. She tells him she undid it. Eli is upset and worried, but he doesn’t share why.

Eli tells Sandra that he wants to go to Zanzibar. Eli tells her that she needs to leave if she wants to stay alive. She is not going. He explains to her that he married the wrong woman. It was his career, no love outside of his job. Everything else is a liability.

Sandra has been taken. Eli won’t get her back until he kills Vargas and frames Cyrus. Eli explains that they will be doing a hit to his right hand man. He gives him a new identity and a rifle, telling him that he will call with instructions. He also needs to know everything about Jennifer on Vargas’ campaign.

The polls are projecting that Vargas will be the next president. Jake goes out to get air and sees Eli outside. Olivia tells Mellie to concede. Eli drugs a secret service man before crawling through the vents where Vargas is on stage. The hit man is outside, ready to shoot. Eli also lines himself up under the stage with a view at Vargas, gun ready. Eli can’t seem to make himself pull the trigger. He is sweating, shaking. He gets up the nerve. Vargas walks away. He comes back to the podium. Eli shoots. The hit man staged at a distance also shoots. Eli shoots again. Vargas goes down, locking eyes with him before he drops to his death. The crows goes wild, screaming. The hit man shoots rounds into the sky.

Eli runs. The hit man saves him when a cop comes up on him. He hands him a letter. It’s the second half of the mission. The hit man McClintock turns himself in. Eli heads to the lab. They turnover Sandra. She is okay. Eli calls Jennifer, who calls in to police that Cyrus did it. Eli starts for the door with Sandra. His blackmailers tell him he isn’t done. He is going to work for them. Eli shoots Sandra in the head. He doesn’t have any weaknesses. They show him live footage of Olivia. They are with her everywhere she goes and they can put a bullet in her head at any time. Eli agrees to work for them.

Olivia shows up at the lab. She asks Eli if he shot Vargas. He did not. He is not a predator. He is her father. He is smart prey. He tells her that Cyrus Been is behind it. He tried to help her with the voting machines. She turned him down. He reminds her – survival of the fittest. She leaves. He leans over a long package. It’s Sandra. He has wrapped her up. He exposes her face and cries.