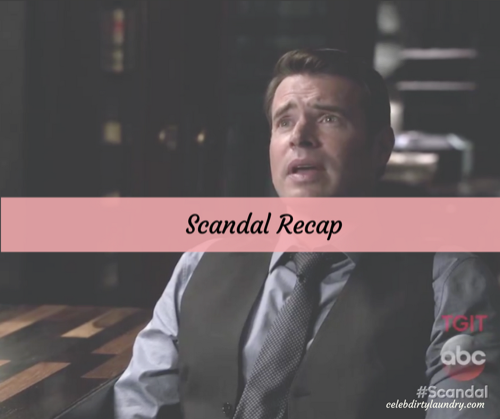 Tonight on ABC Scandal starring Kerry Washington continues with another exciting episode in an all new Thursday, February 9, season 6 episode 5 called, “They All Bow Down,” and we have the Scandal recap for you below. On tonight’s Scandal season 6 episode 5 as per the ABC synopsis, “The campaign is in jeopardy thanks to Jake and Vanessa and their chaotic relationship, so Olivia (Kerry Washington) must take action. Meanwhile, a dramatic revelation concerning Francisco Vargas’ assassination comes to light.”

News reports of Ballard as VP seem to be exciting everyone but him. He doesn’t want to take orders from Liv, act as a puppet head and travel for months at a time. His wife Vanessa reassures him that he is going to make history while Olivia will end up being nothing but a footnote. No-one is going to run him. He will gain power and keep climbing high. They are all going to bow down to him.

Ballard is about to go on the Liberty Report with Vanessa, who isn’t there yet. Olivia reminds him of his talking points. Olivia talks to Mellie on the phone. She wants to be there. Liv tells her no. A call comes in. I’ts Vanessa, there is something wrong with her. Olivia has to cancel Ballard’s interview. The host of Liberty Report can tell that Vanessa isn’t sick with the flu, she knows Olivia is making up the last minute story and she is going to get the truth. Olivia reassures her but she isn’t buying it. Olivia is brought to Vanessa, who is drunk, half clothed and out of control after a car accident.

Back at Olivia’s office, the team do damage control while Vanessa gets snarky with Jake who is angry. He calls her disgusting, nasty, spiteful and awful. Olivia tries to get them under control. Jake is leaving.

Jake and Vanessa share a sweet kiss before he send her off. He meets with Olivia. She needs him to stop acting like a pod person. He wants to know what she wants. She wants him to stop making her feel like a villain. He on the other hand doesn’t care how she feels. He isn’t paying attention to her anymore. She wants to win, she has to win. Jake tells her okay.

At home, Vanessa is angry at Jake. She wants to know why he and Olivia are so close. They are all buddy buddy. She accuses him of sleeping with Olivia. She feels like he talks to Olivia but not her. She bombards him with questions. He yells – I don’t want to talk to you! She is speechless. She wants to know what Olivia has over him. He leaves the room. She drinks more.

Olivia talks to Vanessa, trying to make her understand that if she needs the help they can send her somewhere. Vanessa wants to know if Olivia is sleeping with Jake. She accuses her of being a husband stealer. Olivia reassures her that she isn’t sleeping with Jake. Olivia pushes Vanessa against the wall she shut her up. Vanessa gets emotional, this isn’t her. She wants her husband back. She knows he is cheating. He was getting texts on election night and they weren’t from Olivia. Jake didn’t meet with a woman that night, he met with Olivia’s father.

Olivia brings Vanessa home, who goes right to bed. Olivia asks Jake if something is going on that she needs to know about. He tells her no with some snark.

Jake is looking at records. Vanessa comes down, she can’t sleep. She is going to stop drinking. She wants to know why he hates her. Why does he treat her like trash? She drove the car into the tree on purpose. She wants him to feel something. She wants to know him. Jake softens. He sits and talks to her, holds her and reassures her. For a second, he looks like he might choke her. But changes his mind and tells her that he can’t answer her questions.

Olivia and her team are going over the night of the election, putting together a timeline the same night Vargas was murdered.

Jake enters a cabin. Kills Jenny and then blows it up.

The team goes over what they know. Olivia wants them to watch his every move. Olivia brings Mellie to Vanessa. Mellie tells her that she needs to keep up appearances. She will be happy when the job is done. She needs to suck it up and run the world.

On to the Liberty Report, Vanessa sings Jake’s praises. Meanwhile, the team is gathering all the evidence they can find. The team calls Olivia who is watching Jake and Vanessa’s interview. They can’t find anything. Olivia visits her father. He set up a trust for her and then made it look like she was a part of the Vargus murder. He tells her to stop asking questions that she doesn’t want the answers to. He tells her to leave, now!

Olivia’s father Eli gets a visit from a woman. He wants to know why Olivia is connected to the Larson. She deems it an insurance policy. She tells him that Olivia is expendable.

Jake meets up with Olivia in the parking garage. He brings her on a ride after she tells him she had nothing to do with Tom and the money. She wants to know where they are going. He won’t tell her. He throws her phone out of the car window. She begins to panic. He brings her down a dirt road in the dark. He wants to tell her something. He makes her get out of the car. He killed Jenny because Eli ordered him to. He admits that he tried to love Vanessa, but he couldn’t. He brings her to a cabin with a lock on it. She is scared, afraid he is going to kill her. He brings her in, talks about his mission and then introduces her to Jennifer!