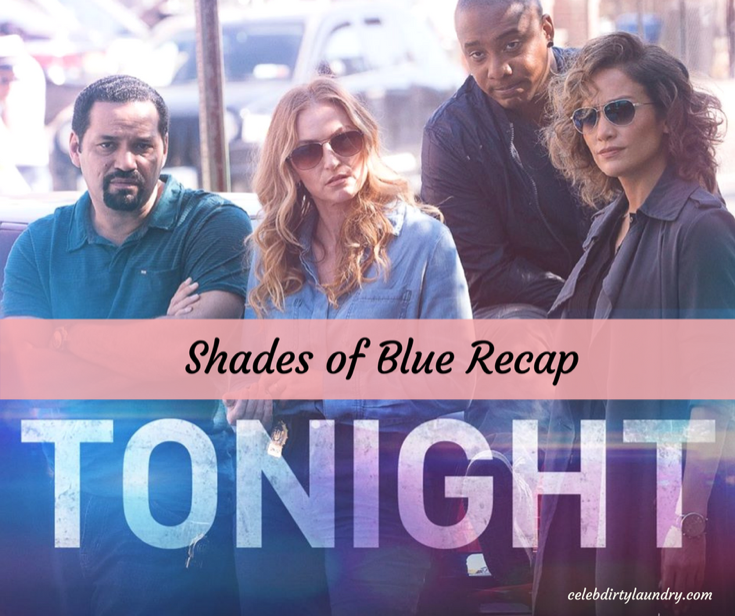 Shades of Blue airs on NBC tonight with an all new Sunday, March 5, season 2 episode 1 called, “Unforgiven,” and we have your weekly Shades Of Blue recap below. On tonight’s Shades of Blue season 2 premiere as per the ABC synopsis, “In the Season 2 premiere, Harlee (Jennifer Lopez) takes drastic measures to cover up the murder of her abusive ex, Miguel; and Wozniak (Ray Liotta) makes a deal with Stahl  to keep himself and his crew out of jail, but soon discovers Stahl has led him into an impossible trap. “

Miguel had been a threat. He had broken into Harlee’s place proving that he could and he had pulled a weapon on her. Miguel had said that he was tired of being treated like dirt and that he should punish both Harlee and their daughter for the things she’s done. But truly what did she do. She had kept him away from Cristina which had been the best thing for the both of them and she had tried to keep him out of their lives. So Harlee knew that Miguel was looking for a reason to hurt her and Cristina so she acted.

Harlee snapped his neck and then she started cleaning up after herself. She wrapped Miguel’s body in a shower curtain, drove out to Saperstein’s grave, and even borrowed a chisel from a friend that helped her cover what she had done. However, Harlee then had to live with herself and that became harder when she went back to the job. She had seen Matt Wozniak’s empty office and she had heard all the chatter about where he could possibly be. So that had reminded Harlee of what she had done to a friend and she was just beginning to feel guilty when suddenly Woz came back.

Woz hadn’t told anyone about where he’d been and what he’d been through though he had ordered Harlee to follow him so she thought that he had wanted to talk. Yet, Woz hadn’t actually been in a talking mood. He had just played the tape the feds had given him of his conversation with her and had shouted at her for wearing a wire even as she denied being the mole in his organization. So Harlee had tried to explain herself. She had said that she had gotten into some trouble and that she should have gone to him the second the feds had caught her.

Though Woz hadn’t been interested in could’ve, should’ve, and did not. He had instead walked her through a bust that he was about to make. Woz had attacked some stranger out of the blue to give them probable cause to enter a building and then he had arrested the men inside. So Harlee had wondered if the bust was a test to prove her loyalty and she had gone along with whatever Woz was up to because she had wanted him to forgive her, but Woz ditched her after they had made their arrest. And what an arrest it had been.

Woz and Harlee had arrested high ranking members of the mafia and so that probably cause of theirs had been questioned. But for now it was sticking and Woz had done that. So Harlee didn’t tell anyone about what Woz did however she was still trying to figure him out for herself. She had wanted to know what happened between Woz and the FBI and she had tried asking Woz questions. Like did he mention the prostitute and he told her that he did. And then he vaguely mentioned that he was still in some trouble.

So what kind of trouble was Woz in? He had apparently made a deal with the feds and, with him, that was worst than death. Woz didn’t like rats yet he had no other choice than to become one in order to escape prison time and so Harlee had wanted to know why Stahl had gone to such lengths to gain Woz as an asset. However, Stahl was still a prick. He had ignored Harlee’s phone calls for a while and he chose to acknowledge her only when he felt like it. And even then he had still been a jerk to her.

Stahl had told Harlee that everything he had done to her and her relationship with Woz hadn’t been personal. Yet, Harlee knew different. She accused Stahl of doing what he did out of spite and she told him that she could have planted the evidence against the mafia on her own because she didn’t need Woz to do that. So Stahl told her that the mafia wasn’t the target. He said that he was interested in the people that were helping the mafia escape charges so he was looking into a dirty District Attorney’s office and thought that Woz would give better access than Harlee could.

Though Harlee had been angry to find out that she had been used. She had thought that Stahl was simply trying to take down Woz for going too far, but once she learned the truth from Stahl’s own mouth, she thought that Stahl was more dangerous than Woz. So Harlee had tried talking to Woz about it and he instead had wanted to know if she knew about the real target because the real target this whole time had been their friend Julia. Julia Ayres it seems had been cleaning up after the mafia and doing her best to ensure that no charges ever stuck.

So Julia was dangerous however she was also important to Woz because the two had once worked together and slept together. But Harlee had tried telling Woz that she didn’t know that Julia was the target and he didn’t believe her. He said that he could never trust anything she said because of how she betrayed him and so he didn’t want to hurt about Stahl playing games with them. He just wanted Harlee and Stahl to be as far away as possible and the last thing he had said to Harlee had been that he wasn’t going to do it – he wasn’t going to betray Julia.