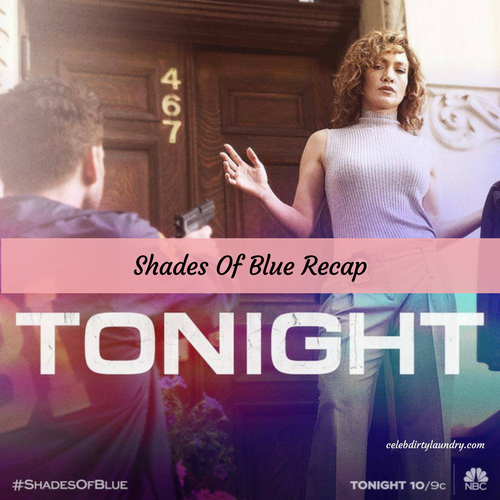 Shades of Blue airs on NBC tonight with an all new Sunday, March 19, season 2 episode 3 called, “Ghost Hunt,” and we have your weekly Shades Of Blue recap below. On tonight’s Shades of Blue season 2 episode 3 as per the ABC synopsis, “After Wozniak (Ray Liotta) refuses to play ball with the FBI, Stahl turns up the heat on Harlee, (Jennifer Lopez) who lands in the middle of Wozniak’s dangerous plan to free himself from the Feds by reeling in a bigger fish.”

Stahl wasn’t messing around anymore. He had deployed a full tactical unit just to scare Harlee and he told her that if he didn’t get Julia Ayres then the whole screw was going down. But Harlee told him that she could talk to Woz and get him to understand. She said that Woz had needed some time to calm down and that he would do what was right for his guys before he ever let them get them get in trouble. So Stahl allowed Harlee to see what she could do however he made sure to mention that he was looking for Miguel and couldn’t find him.

Stahl had told Harlee that he keeps his word and that he was trying to track down Miguel to make sure the other man wasn’t a problem. However, Harlee had tried to talk Stahl out of looking for her ex. She said she Miguel must have gotten the picture and left town knowing that he shouldn’t bother her. So Stahl had asked Harlee if there was any reason he shouldn’t be looking for Miguel and she had to lie by omission when she pretended that she was fine with Stahl looking for a man she killed though it was in fact a problem.

Though Harlee thought she would have an easier time of it with speaking to Woz yet he wasn’t in the mood to see her much less speak to her because he blamed both her and Stahl for costing him his marriage. They had after all both made a recoding of him when he was with his male lover and that same recording was somehow sent to his wife Linda. So Linda didn’t even want to be in the same house as Woz. She was staying with their son Nate and she had also gotten Nate pick up a few things for her in order to not to see her own husband.

So Woz wasn’t in a good place. He was angry about what happened to him and he was back to hating Harlee. Yet, Woz had wanted to feel like he was doing something for the crew and so he told Harlee that he was doing things his way, but he hadn’t given her any details and he left his crew to deal with an Internal Affair’s guy on their own because that detective was back. Detective Tom Verco was looking for Donnie Pomp and he had set up his own office mere feet away from the others. And so that was making people itchy.

They didn’t want to attract unwanted attention and so they tried staying together as much as possible. But Verco managed to get Loman alone for an interview and he had been making the other man sweat before Loman was eventually rescued by Harlee. So Harlee had spoken to Verco briefly and she had found out that he desperately wanted to speak to Tufo however Tufo had been off helping Woz. Woz had talked Tufo into helping him cover up anything they left behind after the heist and so Harlee had to confront Woz just so Tufo didn’t look suspicious.

Then once she got Tufo out of there, Harlee told Woz that he shouldn’t have dragged anyone else into it. She said she was the one that had to make amends and that Woz should have called her first. So Woz told her ok. He allowed her to prove her loyalty by helping him arranging a meet and together they had been doing fine. However, their “associate” had given Tufo details to the person they were meeting and so Harlee had to contend with Detective Verco again though she did get Tufo to the meet and it had been Woz’s job to take care of Linklater.

Linklater was the man that unfortunately lost twelve million dollars not that long ago yet Woz hadn’t told either Tufo or Harlee that he had gotten the guy. He had let them know that he had the informant that they had been working and that they should stay put to meet up with Linklater. Though the meeting they had been expecting hadn’t happened. Tufo had waited around in the park for hours and no one had approached him or even circled the area. So they called off the sting and Harlee left Tufo to go pick up Christina.

Christina had been hanging out with Miguel’s relatives because she thought that she needed to get to know them, but her newfound cousin had talked her into stealing from a corner store and had ditched Christina the second she got into trouble. So Christina had luckily convinced the arresting officer to call her mom the cop instead. Yet, that let Harlee know that her daughter was willfully ignoring her orders to stay away from “those” people and so Harlee had been more than upset when she picked her up.

Harlee had told Christina that she didn’t want her to make the same mistakes as she did and so she had hoped her daughter finally got it through her head that Miguel’s family was nothing but trouble. But Christina still wanted to see that family and she was looking for her dad because she still wanted a relationship with him. So Harlee’s words were like wind and she had another run-in with Verco. Verco had found out about the freezer at Tommy’s and so he had almost caught the crew in an illegal activity.

However, Harlee had gotten lucky and she had thought that the crew was finally going to be free of Stahl when Woz arranged to hand over Linklater. Linklater was technically the man that had arranged the heist and so Woz had wanted to exchange him for their freedom. So he had gotten Stahl to come over and he had thought that would be the end though Stahl had taken matters into his own hands and he had decided to kill Linklater. He said that Julia got his partner killed and that he wanted her and no substitutions.

So Harlee and Woz had to dump another body and they didn’t know how long they were going to have to keep doing this.