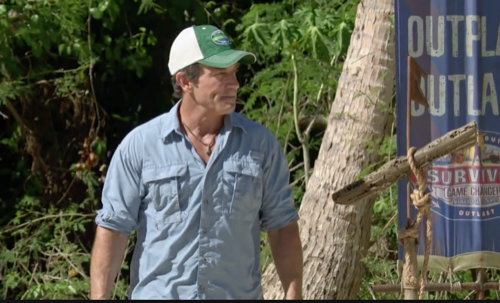 Tonight on CBS Survivor: Game Changers airs with an all new Wednesday, May 17, 2017, Season 34 Episode 13 and we have your Survivor recap below. On tonight’s Survivor season, 34 episode 13 called “Parting Is Such Sweet Sorrow,” as per the CBS synopsis, “Only six castaways remain after two shocking tribal councils, and players pour their hearts into a challenge that could be the key to their safety.”

Night 32 with the Maku Muku tribe everyone is talking how they are confused that Sarah looked surprised when Sierra was voted off.  They are thinking that perhaps Sarah was pandering to Sierra to make her feel Sarah did not know.  Andrea says that Sarah does things that raise question marks and this was definitely one of them.  Andrea wonders if they should get Sarah out.  Cirie is okay with seeing Sarah go.

The castaways head to see Jeff and he tells them it is an immunity challenge. Culpepper has to give his immunity idol back.  Immunity is back up for grabs.  With one head they are going to steady a balance board while simultaneously building a house of cards,  The first person to build the house of cards wins immunity.  It is a Survivor classic last won by Cochran.  Aubry is in the lead at a record pace with Andrea behind her.  The breeze picks up and Andrea loses all her cards and Aubry finishes and wins individual immunity.  Aubry builds the house of cards in 6-minutes and breaks the Survivor record held by Aubry.

Andrea says that Sarah is very clever but she thinks this is the best time to vote her off when she is least expecting it.  Aubry is really excited she won immunity.  Aubry thinks the time is good to get rid of Culpepper. Culpepper has disappeared in the forest and Michaela volunteers to go find him to make sure he is not looking for an idol.  Michaela finds him and suggests he goes finishing.  She tells Culpepper it is a genuine suggestion.

Cirie goes to see Sarah and tells her Andrea should go because she thinks Aubrey and Andrea are in cahoots.  Cirie also thinks Culpepper is too dangerous to keep around.

Tribal Council – the members of the jury come in.  Jeff asks if they are more together and Aubrey says she thinks there is a more solid We. Aubrey says there is still 8 people left and there is a lot can happen.  Cirie tells Jeff it is really quiet in camp not much scrambling.  Jeff asks if Sarah thinks the jury is going to respect game play.  Sarah agrees they will but Aubry disagrees.  Tai agrees with Sarah.  says tonight’s vote is about Michaela strengthening your game and not messing up your end game.

Andrea says she is really frustrated going out the 33 day she thought she had build relationships but she says this is Survivor.

The castaways head back to camp.  They all agree it was a good move but Cirie says she does not trust Aubrey.  Cirie finds it weird that when they got back to camp Tai went to console Aubrey more than anyone else.  Cirie feels Tai works people and she thinks now Tai and Aubrey are a pair.

The castaways head to see Jeff and he takes back immunity from Andrea and they are told it is another immunity challenge.  The castaways have to perch on a pole, lift a bucket of water up and pour in a tube to get a key.  Once they get the key they go and unlock puzzle pieces and make a puzzle. Michaela thinks she has the puzzle, Jeff tells her NO it is wrong.  Culpepper thinks he has the puzzle.  Culpepper wins immunity and is safe.

Maku Maku Day 35 – Troyzan is upset Culpepper won immunity and he is taking his immunity idol to tribal just in case.  Tai says he has to do something to show the jury he is a player, a fighter.  Tai feels he has to show the jury a big move and he feels getting rid of Sarah will do it.  Aubrey goes to Cirie and tells her that Tai sees Sarah as a threat.  Cirie goes and tells Sarah and Sarah wonders if Aubrey is lying.  Sarah tells Cirie she is going to give her her advantage.  Cirie is upset because she feels Sarah is too confident.  Cirie tells Michaela that Sarah is too confident in Tai.  Cirie tells Michaela that Sarah gave her her extra vote and although Sarah told her not to play it she will.  Cirie decides to lies to Tai and tells him he is being voted out tonight and she is going to save him because she has an advantage.  Cirie hopes she can fool Tai.  Tai is freaking out and Tai is wondering if he should use his idol,

Tribal Council – the jury comes in and Jeff asks Sarah what happened when they got back to camp.  Sarah says there was a lot of sneaking and a lot of lying going around.  Cirie says there were several lies going on in different packets Culpepper agrees.  Tai says he is scared but he always gives people the benefit of the doubt.  Jeff comments that it appears fear is part of the group.

The Vote Cirie stops the vote and tells Jeff there is a rat in the group and the person she saves by exposing the rat will thank her tomorrow when they wake up on Day 36 and she would like to use her advantage to take away someone’s vote and utilize the vote for herself.  Cirie decides to steal Sarah’s vote.  Sarah says wait, “that is my vote and it says it cannot be stolen.”  Cirie says, “It wasn’t stolen it was given to me.”  Sarah argues the vote is non-transferable and it says it on the bottom.  Jeff tells Cirie to read the advantage and the rules that go with it.  Jeff tells her the keyword is non-transferable and Sarah is the only person who can use it.  Jeff tells Cirie things are crazy because her intention was revealed but she does not have the power to make the move because she did not read the rules.

Sarah says she is going to use her challenge and she is taking Tai’s vote.  Jeff goes to tally the votes. He asks if anyone has a hidden immunity idol.  No one responds

Tai, Tai, Aubrey, Michaela, Michaela, Michaela the 14th person voted out and the seventh member of the jury Michaela. An unhappy Michaela leaves.  Culpepper tells Tai that Cirie and Michaela voted for him.  Jeff comments that tonight was clearly a game changer and with only six players and four days left he feels there is very little trust and he cannot wait to see how it finishes.