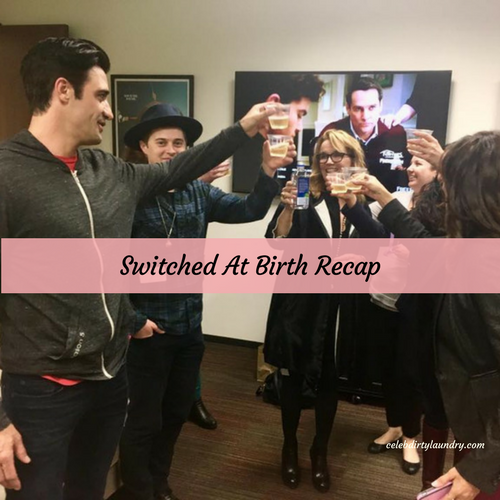 Switched At Birth returns to Freeform tonight with an all new Tuesday, March 21, season 5 episode 7 called “Memory (The Heart),” and we have your Switched At Birth recap below. On tonight’s Switched At birth season 5 episode 7 as per the Freeform synopsis, “Bay and Daphne are flooded with memories of their late father after meeting a mysterious woman. Meanwhile, Toby is caught between his mother’s wishes to baptize his son and his wife’s feelings about faith; and Melody asks her sons to make amends so the family can be together for her birthday.”

Daphne still misses Angelo. He had been taken from her so abruptly that it had been hard for her to come to terms with his death however a young woman named Ally was offering Daphne a chance to still have some part of him in her life. But was Ally for real? Ally claimed that she had received Angelo’s heart and that was after all a possibility. So Daphne had wanted to get to her and see if she was like Angelo in any way – just it was strange that Daphne ran into her at the student clinic and it hadn’t looked like a coincidence.

Ally had gone out of her way to get to know Daphne and she had wanted to be introduced to Daphne’s family members like Bay. However, Bay had gotten a little too swept in by Ally. She had liked her and had wanted to help the young woman cover up her scar from her heart transplant with a tattoo yet it was odd that Ally had wanted to meet more people and that she claimed she had woken up with cravings after her surgery. She said that she suddenly began liking red wine and salsa dancing. So that had reminded the girls of Angelo because he had loved those things too.

Yet, Angelo was gone and holding onto him by trying to fit Ally into their lives wasn’t something that everyone in the family had approved of. Daphne had tried to talk about Angelo to Regina because she had wondered if her mother would like to meet Ally and it doesn’t seem like Regina wants to remember that time from her life. She had told Daphne that it had been a hard decision to donate Angelo’s organs and she hadn’t wanted to think about it again though that Regina’s answer hadn’t been what Daphne was looking for.

Daphne had hoped that she could convince her mother to meet Ally, but she respected her mother’s decision because she hadn’t wanted to cause Regina anymore pain. Though Bay had later did something without talking to Daphne first. She had invited Ally to stay with them at the apartment for a few days seeing as Ally claimed she was between places and was living in her car. So Daphne had come home to a nasty surprise and that had kicked in some common sense. She had told Bay that they hardly knew Ally and that they should have talked before she “moved in”.

Bay however had said that Ally was like family because she had Angelo’s heart and that they should help her because she didn’t have anyone else what with Ally saying her mother died of pancreatic cancer. But, still, Daphne didn’t feel comfortable with having Ally stay with them. She thought that there should be some boundaries with Ally and actually gotten upset afterwards when she found Ally at Regina’s coffee shop. So Daphne had confronted Ally right in front of her mother. She said that Ally knew Regina’s decision and should have respected it.

Meanwhile Ally had pretended like she hadn’t done anything wrong. She said she wouldn’t have told Regina and that she simply wanted to meet her. However, Daphne had felt like Ally had crossed a line. She had to later explained the situation to Regina and she had seen how upset her mother had gotten after finding out about Ally. So Daphne had woken up. She had realized that maybe they shouldn’t have just taken Ally at her word and that Ally might not even have Angelo’s heart. And that she could be an imposter for all they knew.

So Daphne had decided to look into Ally. She had gone to the hospital where Angelo died and she had asked to see who had gotten his heart though the hospital had at first been reluctant to say anything to Daphne. The administrator had said that recipients are anonymous and that she couldn’t reveal their names without their consent. Yet, Daphne said that Ally had already met her family and that she had more or less given her consent the second the she approached them. And so the administered had looked up Angelo’s details which proved Ally was right.

Ally had gotten Angelo’s heart. Though the administrator had remembered Ally’s case and she had told Daphne that it would be wise to look into Ally because there had been a few things in the young woman’s life that stood out. So Daphne did as suggested and she found out more about Ally, but she had been left furious about what she found. Daphne had found out that Ally lied about several things. Like having congenital heart defect because that’s not why she had to get a heart transplant. Ally had to get a heart transplant because she had ruined hers with cocaine usage.

Ally had apparently been a hard partyer and she had even been arrested for a DUI. But what’s more had been the fact that Ally lied about her mother being dead. Her mother wasn’t dead and was instead in prison. So there hadn’t been much that Ally had told the truth about and so both Daphne and Bay had wanted her out of their lives. They felt like Angelo’s heart had been wasted on a druggie and that Ally hadn’t deserved a new heart however Ally had also gotten angry because she said what did two girls from Mission Hills know about her life.

Ally said she grew up with a tough life and that she had simply been telling them what they wanted to hear. However, they had told her that they didn’t want anything to do with her and that was something they both regretted. Daphne had “talked” to Angelo and he had reminded her that he had gotten a second chance. So that’s what Bay ended up giving to Ally. Bay had run into Ally where Angelo died and she had talked to the other woman about the lies as well as about Angelo. Angelo had died and Ally had been reborn.

There hadn’t been any way to get around that and so Bay had still wanted to give Ally that tattoo. So she later gave Ally a tattoo of Angelo’s tree and that way Ally could always remember the gift she had been given. Yet, the two had been surprised later on when Travis and Emmett stopped by the tattoo parlor. They guys had seemingly worked through things and they were trying to be on the same page so Travis had brought Emmett to the parlor because he wanted Emmett to be able to finish his photography project.

Though while Bay was finally getting that moment she had wanted where she felt Angelo’s presence, Daphne had been trying to convince Regina about meeting Ally. Ally had been a way to keep Angelo or at least his presence in their life. So Daphne felt like Regina should meet Ally and that it would give her comfort, but Regina had been a little apprehensive. She had wondered if she would meet Ally and wouldn’t feel anything so Daphne had told her that they wouldn’t know unless Regina gave Ally a chance.

So Regina decided to meet Ally and the meeting had surprised her. She had found out that Ally liked to wear a prism necklace because she had wanted to be surrounded by light and that had gotten to Regina. Regina still had the keys to the house that Angelo had been building for them and so she had showed them the prism that had been on the keys. Angelo had apparently also wanted to be surrounded by light and finding out that Ally shared that trait with him had been just what Regina needed to connect to her. And that hadn’t been the only good thing to happen.

Lily and Kathryn had initially argued about which religion they should raise baby Carlton in, but in the end Kathryn decided to respect Lily’s faith and Lily decided to raise her son to be Jewish like her.