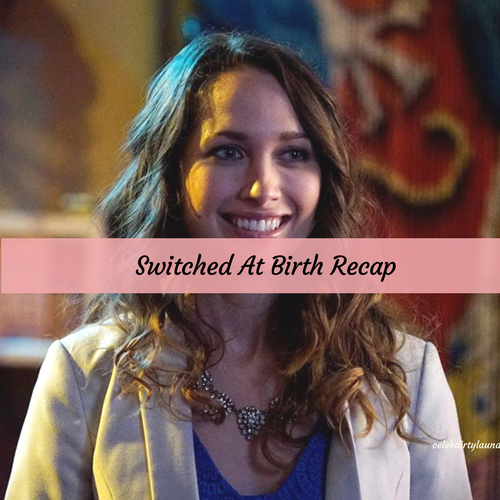 Ally burns their dinner and Bey saves the day by arriving with pizza. Daphne can’t believe that Mingo is in DC visiting his girlfriend. As they eat the lights go out and the girls realize they didn’t pay the electric bill. Bey tries to borrow money from her parents but they say the bank is closed. Kathryn is sad that a couple of good friends are moving out of town and John suggests they hang out with Regina and Luka.

Kathryn and John offer support to Chris and know how hard it was for him to sit out the playoff game. Bey tries to borrow money from Regina for the electric bill but she also says no. She offer Bey hours at the Cracked Mug but Bey is not thrilled.

Regina can’t believe she got a C on her paper while Luka got an A but the teacher won’t change her grade. Chris asks Daphne out and Bey says she should go but be careful because Chris is a player. They both think he will help get Daphne’s mind off Mingo.

Ally and Bey decide they will have a keg party and charge admission to make the money to pay the electric bill. Daphne and Chris have fun at the batting cage but his bloody nose ends it early. Toby runs into Simone at the coffee shop but she reacts badly when she meets the baby and realizes he has Downs.

Bey talks Toby into DJ’ing for the party. While Chris is checked out by the Doctor for his bloody nose Daphne notices bruising on his arm and worries he is using steroids.

The party starts out with Jello shots and Bey is excited to have Simone meet Travis. Kathryn, John, Regina and Luka play board games and Regina and Luka kill them in the score. While Luka is in the kitchen Regina sees a text come in from a girl asking if they can meet later. He then makes up an excuse to leave. Daphne and Chris kiss but she pull away. She asks if he is using steroids but he denies it and leaves in anger.

A couple guys at the party starting making jokes about handicapped people and Toby tells them to leave. They refuse and Travis punches one of them in the face. They leave and Bey tries to calm Toby down. He says it wasn’t just the guys but also Simone’s reaction to meeting Carlton earlier.

Daphne asks Travis if he knows of a rumor of baseball players using steroids. He says no way. The athlete and the whole team could be punished. Some of the party goes end up in the Cracked Jug and Bey can’t get them to leave. Simone says it is too hot upstairs and to save face Bey says it is OK to keep the party downstairs.

Regina and Kathryn snoop on Luka’s social media and see that Luka and the professor of their class used to date. She can’t believe he left to go meet her. They decide to wait outside of his house for him to return. After talking they decide they are being ridiculous and start to leave but are caught.

Ally meets a girl at the party who needs a roommate and so she will be leaving the girl’s couch. Luka shows up and insists they get everyone out of the shop. Before they can, several mugs get broken and Regina shows up. She can’t believe Bey was having a party with alcohol when she is under age. Bey will have to pay for the damage.

Bey admits to Simone that her life is a mess. Simone admits that while she makes good money she is very unhappy. She asks that they call a truce. Daphne tells Kathryn that she is thinks someone on the baseball team is using steroids.

Luka confronts Regina about being in front of his ex-girlfriend’s house. Why doesn’t she trust him? She is worries she is standing in his way of having children. Luka insists he doesn’t want children. They make up and kiss. Simone and Toby met in the park and she apologizes for the way she reacted before.

Chris confront Daphne and says he was only using for a couple days to help his arm heal due to his encounter with the police. Now her mom has ordered the whole team take a drug test. His whole career is over and it is her fault. Bey sells her car to pay the electric bill and to pay the money she owes Regina.