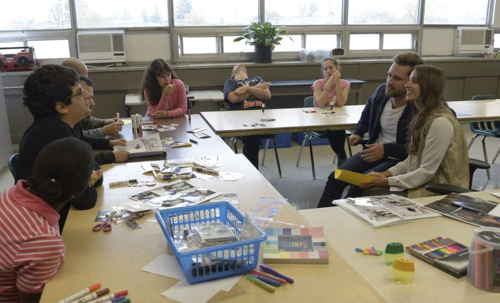 The Bachelor 2017 airs on ABC this evening with an all new Monday, February 20, 2017, season 21 episode 8 and we have your The Bachelor recap below. On tonight’s The Bachelor season 21 episode 7 as per the ABC synopsis, “Nick meets the families of the final four bachelorettes when he goes on hometown dates. Later, everyone meets up in New York City for the rose ceremony but a surprise visitor to Nick’s hotel could alter everything.”

Tonight’s episode of The Bachelor kicks off where we left off last week – the final four girls are still in the Bahamas, and shocked that Nick Viall just unexpectedly sent Kristina home before the rose ceremony. Corinne, Vanessa, Rachel, and Raven are sitting in the hotel, unsure what to do next.

Finally, after what seems like forever, Nick Viall arrives at the girls’ hotel room. He’s still a little upset about having to send Kristina home. Nick says that there won’t be a rose ceremony, and he has brought along four roses for each of them. Raven, Corinne, Vanessa, and Rachel are all thrilled to be going on hometown dates with The Bachelor.

Nick Viall and the final four women head back to the States. Nick’s first stop is Hoxie, Arkansas, where Raven is waiting for him. She picks Nick up on a four-wheeler, and can’t wait to show him what a day us like in Hoxie. Raven takes Nick to a grain bin, while they are climbing it – a local cop shows up. He gives Nick a hard time about trespassing, and Nick is obviously nervous, then the cop reveals that he is Raven’s brother and it’s all a joke.

After Nick’s little run-in with the Hoxie police, Raven and Nick spend the afternoon mudding on four-wheelers and splashing in the water together. Raven admits that her feelings for Nick are getting stronger and stronger.

Raven takes Nick to her parent’s house and introduces Nick to her parents. Raven’s father Wesley was diagnosed with lung cancer a year ago, so Raven’s homecoming is emotional – she tells Nick that he may be the last man that her father ever sees her with. But, Raven’s parents have exciting news – her mom Tracey announces that her dad Wesley is cancer free! Everyone celebrates the exciting news, and then Nick has a heart to heart with Raven’s dad. Raven’s dad is impressed with Nick and would be more than happy to watch his daughter marry The Bachelor.

After a long day, Raven and Nick say their goodbyes. Raven wants to tell Nick that she loves him, but she chickens out at the last minute. She’s scared that not saying “I love you” before Nick left could mean that she will be eliminated.

Next, Nick Viall travels to Dallas, Texas to meet up with Rachel Lindsay – she greets him in the park and has a surprise for him. Rachel takes Nick to her church, which happens to be a predominantly black congregation. Rachel is curious to see how Nick handles himself, but there aren’t any issues and they both have a blast. The preacher even stops the sermon to welcome Rachel back and introduce himself to Nick.

After church, Rachel takes Nick home to meet her family. Unfortunately, her Dad is away on business and hasn’t made it back to town yet. So, it looks like Nick won’t be meeting him today. Rachel introduces Nick to her mother Cathy, her sisters, and her brother-in-law. Rachel’s older sister’s husband is white, and everyone wants to discuss whether or not Nick is ready to be in a bi-racial relationship and how many black girls he has dated in the past.

Nick handles Rachel’s family’s questions like a pro, and he insists that when he looks at Rachel he doesn’t see whether she is black or white, he just sees Rachel. Her family is grateful that he doesn’t care about their difference in race, but Nick also needs to acknowledge the fact that some people may have an issue with their relationship.

Nick has a heart to heart with Rachel’s mother about their relationship. Afterwards, Rachel’s mom gives her and Nick her seal of approval. She even says that Nick reminds her of Rachel’s dad, which is a huge compliment. After a long day together in Dallas, Nick and Rachel say their goodbyes and he jets off to his next hometown date.

Corinne is waiting for Nick in Miami, Florida. When he arrives, she announces that she is going to take Nick on a “day in the life of Corinne.” Let’s just say that a day in the life of Corinne is not ordinary. She takes him to a very exclusive shopping center in Miami, and they spend the day trying on clothes. Nick is breaking out in hives because everything is so expensive, but Corinne insists on buying him a $3400 outfit.

After their shopping spree, Nick and Corinne grab a bite to eat. Before they head to Corinne’s house to meet her family, Corinne surprises Nick and announces that she loves him. Nick doesn’t respond, but kisses her instead. Corinne’s certain that means that he feels the same way.

Corinne introduces Nick to her parents, and her infamous nanny Raquel. It turns out that Corinne’s dad Jim is as intense as she is. Corinne’s dad’s main concern is that Nick won’t be able to keep Corinne happy if they get married because Corinne has expensive tastes. Corinne insists that she has no issue being the bread winner and taking care of Nick.

While Nick is chatting with Jim, and getting his blessing, Corinne chats with her mom. Her mom is concerned that Corinne may get hurt, she warns her that right now this is all fantasy and she may not get the happy ending that she expects. After a night of Greek food and a lot of booze, Nick says his goodbyes and Corinne walks him to his car.

Nick’s final home town date is in Montreal, Canada. When he arrives, Vanessa Grimaldi is waiting for him, and she has an extra fun day planned for them. Vanessa is a teacher at a special needs school for adults – she takes Nick with her to meet her students, and they spend the day making a scrapbook full of photos from Nick and Vanessa’s time on The Bachelor so far.

Vanessa’s parents are divorced, so they will be visiting her mom’s house first, and then her dad’s house. Meeting Vanessa’s mom and sister doesn’t exactly go smoothly. Vanessa’s mom can tell that she is falling hard for Nick, and is worried that Vanessa is just going to get her heart broken. Meanwhile, Vanessa’s sister points out that she and Nick haven’t even talked about the future, are they going to live in Canada or the States? And, what does Nick plan on doing for a job after The Bachelor is over?

Vanessa and Nick leave her mother’s house with their spirits down. It was a tough evening, and neither of them really got the support they were hoping for from her mother and siblings. Dinner at Vanessa’s dad’s house isn’t much better – he flat out tells Nick that he will not give him his blessing to propose. Vanessa is pretty upset when she learns that Nick already asked the other 3 girls’ parents for their blessings to get engaged too. Nick heads back to his hotel. But, Vanessa isn’t happy with how the night went.

Nick and the final four women all jet off to NYC to meet back up for the next rose ceremony. One of the women won’t be getting a rose and will be sent home. While Nick is getting ready for the rose ceremony, there’s a knock at the door. It’s Andi Dorfman …