The Bold and the Beautiful Spoilers: Lawrence Saint-Victor Returns as Carter Walton – Romance With Nicole 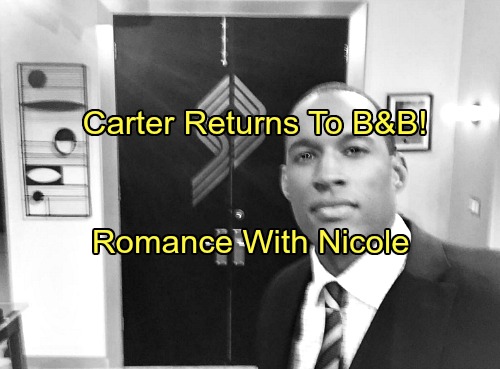 The Bold and the Beautiful (B&B) spoilers reveal that Lawrence Saint-Victor is returning to the CBS soap. Previously portraying the role of Carter Walton since January 2013, he will likely be reprising that role. Find out everything that is known about his return.

On Instagram, Lawrence Saint-Victor shared a photo of himself posing in front of Spencer Publications. He seems excited to get back to work and fans are looking forward to seeing him again. It is teased that Carter could get tangled up in the Spencer Publications storyline. What kind of drama will he find himself in on the soap?

The Bold and the Beautiful spoilers reveal that the last time Carter was seen, he broke off his engagement to Maya Avant (Karla Mosley.) Carter fell hard for her, but things were not meant to be. Could Carter and Nicole (Reign Edwards) be destined to get together now that Zende (Rome Flynn) is gone?

As fans recall, he initially came to town to visit his adoptive brother, Marcus Forrester (Texas Battle.) He ended up taking a job at Forrester Creations. Even though he was an attorney, Carter also had a passion for acting, which is how he got closer to Maya before their falling out.

The Bold and the Beautiful spoilers don’t go into much detail about what to expect from Carter but he would be a natural for a romance with now-single Nicole. The last time he was seen was in August 2017.

However, Lawrence Saint-Victor has been keeping busy with other projects. He plays Brent in Stepford Sidechix and portrays Carl in Collar. Prior to appearing on B&B, he spent time working on Zoe Ever After, For Better or Worse and had a recurring role in Guiding Light. In fact, that is what he is best known for is his soap roles.

What do you think is going to happen with Lawrence Saint-Victor on B&B? Will Carter Walton get mixed up with the drama between Liam Spencer (Scott Clifton) and Dollar Bill (Don Diamont?) Will he find a new love interest in Nicole? To find out, keep watching the CBS soap. Remember to check back with CDL for the latest in The Bold and the Beautiful spoilers, updates and news.

#setlife #mondaygrind 🎥🎬Get after it!!!