The Bold and the Beautiful Spoilers: Liam Doesn’t Deserve Steffy – Bill is the Better Man

BY Sean O'Brien on November 16, 2017 | Comments: one comment
Related : Soap Opera, Spoiler, Television, The Bold and the Beautiful 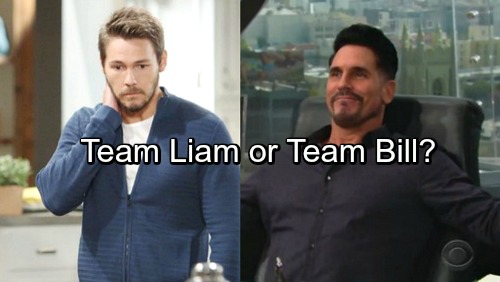 The Bold and the Beautiful spoilers documented Steffy’s (Jacqueline MacInnes Wood) seeming move away from Liam the Brat (Scott Clifton) and toward Dollar Bill (Don Diamont). However, Steffy lost her nerve after rightly telling Liam that he disgusted her and then up in a real man’s arms.

If there is any social justice in this world, Steffy has conceived Bill’s child. That would give Liam another sibling, instead of the son or daughter he doesn’t deserve to have with this great woman.

Dollar Still would have been a great couple. The mashed name itself was a genius stroke by this scribe. But he might not be able to use it if Steffy doesn’t come to her senses.

Oh, there are those moralists who will whine on about the so-called vows Lip Service Liam made to his second-time bride. That crowd will whimper about how unfair the evil Bill Spencer was toward his disloyal son. They will cite the bearded boy’s heroic efforts to save pristine Sally (Courtney Hope) and her world class team of creative artists, who were seemingly set to spark world peace talks through their fashion designs.

To all referenced pleaders this keyboard replies with an imperative statement. Take the blinders off and see reality!

A real man behaves as Bill does. That visionary views the earth as space to be conquered. He isn’t satisfied with simply making strong profits. No, he wants more. Why? Because life is there for the taking.

Those who possess Liam’s personality type want to save the seals, the eels and in this case, the high heels. Those who brandish Bill’s persona see seafood to be eaten and small companies to be crushed so their land can be properly re-purposed. And then there is Steffy, who is a queen among women.

All who attack Liam’s momentary wife expose the jealously that so obviously lies within their shallow souls. They can’t come close to eliciting her level of compassion. She deserves some type of pity medal for being with Liam. They can’t compete with her brains, as IQ tests would prove. And they can’t match her looks. Ah, that dagger might sink deepest of all as it is so sweetly true.

Liam isn’t worthy to wear Steffy’s ring on his finger. He and that Spectra woman deserve each other.

Together, Leffy could open a no-kill lemonade stand on a street corner in Los Angeles. No lemons would be harmed in the making of said drink. Instead, an organic yellow mixture would be used to create a faux gulp. All realized money would be earmarked to save the planet, or possibly Neptune.

Hopefully, Steffy will get rid herself of Liam and then go back to Bill. Their projected baby could allow that scenario to unfold a short time from now.

This proposed, righteous change would upset many B&B characters, along with a segment of its fan base. But the bold and beautiful (Steffy and Bill) must always brush off concerns offered by cringing critics.