The Bold and the Beautiful Spoilers: Next 2 Weeks – Cheating Fears for Steffy, Liam Under Fire – Mateo Goes Too Far, Quinn Shocked 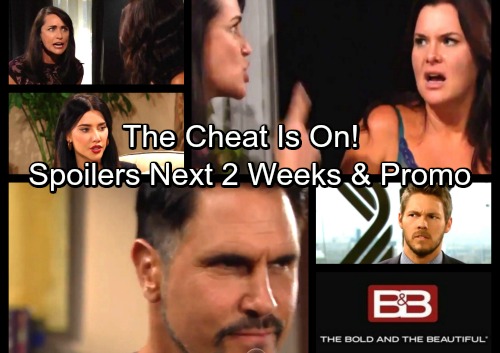 The Bold and the Beautiful (B&B) spoilers for the next two weeks tease that we’ll see some schemers and dreamers. The week of October 16-20 will bring a new angle for Sheila (Kimberlin Brown). She’ll try to make Pam (Alley Mills) her pal in hopes of using her. We have a feeling Pam will be hesitant to trust the nut job!

Across town, Eric (John McCook) will get caught in the middle of Quinn (Rena Sofer) and Katie’s (Heather Tom) conflict. He’ll do his best to make peace, but that’s going to be awfully tough. After Quinn causes chaos in Katie’s bedroom, neither one of them will be interested in making amends.

Naturally, things will get tricky for Wyatt (Darin Brooks) as well. He’ll remain committed to Katie, but Quinn will struggle to leave his romance alone. Elsewhere, Liam (Scott Clifton) will scold Justin (Aaron D. Spears) for what he believes his disloyalty. He’ll feel like Justin needs to focus on helping Spencer Publications, not Bill (Don Diamont).

Nevertheless, Justin won’t bail on Bill when he needs him most. He’ll come through when it counts and Bill will be forever grateful. A tech guy named Ken (Danny Woodburn) will also arrive to help delete the incriminating evidence. Can Ken make Bill’s confession tape disappear? Bill will have high hopes!

Other Bold and the Beautiful spoilers say Steffy (Jacqueline MacInnes Wood) will fail to bring Liam and Bill together. She’s probably about ready to give up on these two. The drama is taking a toll on Steffy’s marriage and that trend will continue during the week of October 23-27.

B&B spoilers say Steffy will blast Liam when he continues to give Sally (Courtney Hope) all his attention. The escalating war with Bill won’t help matters. Steffy will remind Liam that he needs to be loyal to his wife and family. She’ll wonder if Liam is capable of that anymore.

It sounds like cheating fears are brewing, so we’ll see how Steffy and Liam handle that. Most buzz hints that both of them could be headed for affairs. Meanwhile, Quinn’s (Rena Sofer) marriage could also be at risk. Mateo (Francisco San Martin) will decide to take a chance and move his plot forward.

The Bold and the Beautiful spoilers reveal that Mateo will go too far, which could mean a kiss is coming up. How will Quinn respond to Mateo’s advances? Can she regain control of this situation before it’s too late? We’ll give you updates as other B&B news emerges. Stay tuned to the CBS soap and don’t forget to check CDL often for the latest Bold and the Beautiful spoilers, updates and news.