BY Sean O'Brien on December 13, 2017 | Comments: one comment
Related : Soap Opera, Spoiler, Television, The Bold and the Beautiful 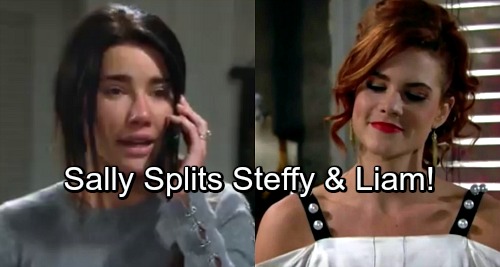 The Bold and the Beautiful spoilers documented Steffy (Jacqueline MacInnes Wood) and Liam (Scott Clifton) fall from bliss to ickiness. We know that vinyl is having a revival, but this couple’s endless analysis of their favorite subject, themselves, sounds like a scratched record.

Romantic relationships are complex, as many readers and this scribe have experienced. Sure, good times are smooth. But problematic situations naturally evoke a need to work things out. There is no set time frame in these instances. But jeez, haven’t we seen enough shots of Steffy’s waterworks and Liam’s dumbfounded responses to what’s happened?

Raise your hand, tweet, post, or respond as you like if it feels like B&B is stalling. Advance the narrative by having everyone go back to work and intermingle. Let’s see some near misses, like Liam almost overhearing Bill (Don Diamont) and Steffy recanting their night together.

By the way, how many times is Diamont’s character going to mentally replay his romp with Steffy? Was she really all that Dollar Bill, or are you just obsessed with your son’s wife because of your warped competitive nature?

Liam behaved like a complete fool for months on end, pleading Sally’s (Courtney Hope) so-called cause like an end-times street corner profit as his scruffy beard continued to grow.

Leffy is an apt nickname for Liam and Steffy because it sounds like a tag the high school fashion club would apply to this pair if everyone were in the tenth grade. Juvenile is the right way to describe the underdeveloped emotions Mr. and Mrs. Steffy Forrester have for each other. Yes, Liam is a total pushover.

Dude, your own father took your wife to bed and you continue to apologize to her for kissing Sally. You and Sally II thought that death was imminent. And, as you recall, that entire disaster was your fault because Bill’s authority was disrespected.

The inevitable shouldn’t be delayed, as it’s already proving insufferable to watch Liam dote over the Princess ad nauseam. Meanwhile, Steffy is as guilty as could be. She needs to lie to her husband and herself simply to get through each day.

Clearly Steffy was wrecked by what happened. Savvy B&B fans must be wondering if she talks in her sleep?

One night, while Leffy is laying in their little bedroom inside that seaside palace, Steffy will cry out, “Bill, Bill, Bill!”. She could tell Liam anything upon awaking and he’d buy it. So, some other scenario will have to play out.

Ah, Sally somehow gains knowledge of that ill-fated night in the Forrester guest house. Yes, that spill would be palpable and able to be exploited into Leffy’s breakup, followed by Liam’s run into his next protector’s arms. Lally forms and rolls off the soapy tongue quite well.

A marriage comes undone and one proposal follows another this week on #BoldandBeautiful! Tune in weekdays on CBS Daytime.