The Bold and the Beautiful Spoilers: Sally’s Faith in Humanity Restored – Liam’s Eye Wanders Away From Steffy 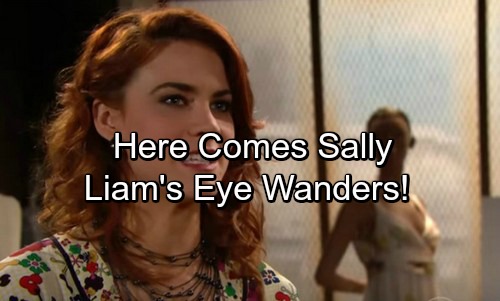 The Bold and the Beautiful spoilers tease that Sally’s (Courtney Draper) faith in humanity isn’t the only thing that’s been restored. She might soon recover from being dumped by Thomas (Pierson Fode) as well. Yes, Bill’s (Don Diamont) suspicion about his son fawning over Miss Spectra is on the mark.

Steffy (Jacqueline MacInnes Wood) instantly rejected Bill’s assertion. But Mrs. Spencer will have questions when she learns how Sally Girl (a cute nickname Shirley, Patrika Darbo, uses for her granddaughter) miraculously regained her family business. Despite Steffy’s knowledge about Bill’s actions, she’ll be forced to wonder why Liam (Scott Clifton) is being so overly generous in the red head’s regard.

Liam did the right by Sally, which plays into his alternative morality show. Someone who was truly bold would have turned Dollar Bill into the Los Angeles Police Department. Then, he would have told Sally and her quirky crew everything he’d learned. But that wasn’t the tack he took.

Clifton’s character believes he’s playing the long game. He used and is retaining leverage by not turning his father in. That was a wise move. Liam has honestly noted that he’s learned many different types of lessons from his father. That’s how he was able to target one of Bill’s weaknesses. An enlarged ego can block partially one’s assessment of enemies.

Bill has often flexed his muscle through the years. Now, based on Liam’s accurate calculation, he’s been heeled by it. But hardcore viewers know that Bill will never remain on a permanent leave of absence. No, he’s already plotting a comeback.

Meanwhile, Sally has now been unexpectedly tasked with reviving her vision. She’s demonstrated the ability to lead her family business. However, her renewed company will be working without Thomas’ talent moving forward.

Sally also learned that her supposed soul mate is remaining in New York so he can be with his family. Fode’s departure from the B&B cast has been announced, which makes Sally a romantic free agent.

Clear chemistry was evidenced in Liam’s office between the new Spencer chief and Sally. Yes, it was odd to write that last sentence. Justin (Aaron Spears) will likely include this article in the daily briefings he’s providing Bill.

Doing so will allow Liam’s father to further plant seeds of doubt in Steffy’s head. Bill is plotting, regardless of whatever he claims about remorse. The fight against his son will be waged on business and personal fronts.