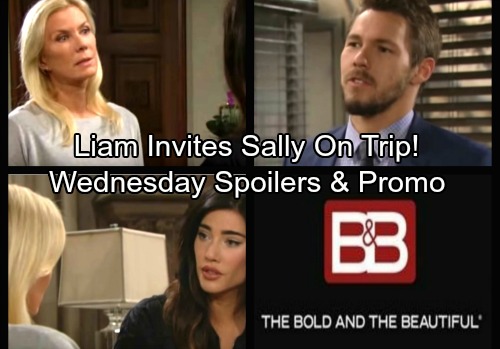 The Bold and the Beautiful (B&B) spoilers for Wednesday, October 4, tease that Steffy (Jacqueline MacInnes Wood) will reach out to Brooke (Katherine Kelly Lang). She’ll wonder if time has provided a new perspective on the situation with Bill (Don Diamont). It hasn’t been that long since Brooke learned the truth, but Steffy will still hope she’s cooled down enough to change her mind.

Unfortunately, Brooke won’t be willing to take Bill back. She’ll reiterate that Bill committed a horrible crime and hid it from her. Bill never would’ve confessed if he hadn’t been backed into a corner. Of course, Steffy will maintain that Bill’s sorry and wants to make it up to Brooke. She’ll do her best to score Bill another chance with his wife.

Brooke will point out that she has options. She’ll note that Ridge (Thorsten Kaye) is currently trying to win her back as well. Steffy obviously thinks her dad is a decent guy, but she might bring up the incident with Quinn (Rena Sofer). Both Bill and Ridge betrayed Brooke through secrets, but Ridge’s deception involved stealing kisses from an enemy.

Steffy will argue that Bill remained faithful and will continue to do so. She’ll beg Brooke to see that she’s making a huge mistake. Steffy will insist that if Brooke leaves Bill now, she could lose him forever.

Meanwhile, Bill will give his rival a warning. The Bold and the Beautiful spoilers state that some heated conflict is on the way. Bill will snarl that Ridge had better back off or else he’ll pay the price. He’ll make it clear that Ridge’s attempts to woo Brooke aren’t acceptable.

Ridge will probably just laugh in the competition’s face. B&B fans know he’s not afraid of Bill and his angry threats. Across town, Liam (Scott Clifton) will have a suggestion for Sally (Courtney Hope). As he works to help her repair Spectra, Liam will have another idea to speed the process along.

The Bold and the Beautiful spoilers reveal that Liam is headed to San Francisco. It seems he has some business to take care of, but he’ll want Sally to come along for the ride. Liam might be meeting with some suppliers who could pitch in with Spectra’s restoration.

It looks like Liam and Sally will hop on the Spencer jet this Friday, so that’ll be another opportunity to grow closer. We’ll give you updates as other B&B news comes in. Stay tuned to the CBS soap and don’t forget to check CDL often for the latest Bold and the Beautiful spoilers, updates and news.