The Bold and the Beautiful Spoilers: Week of December 11 – Steffy’s Pregnant – Thorne Kisses Brooke, Wants Her to Marry Him 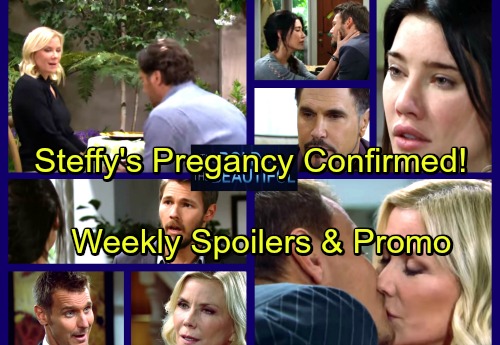 The Bold and the Beautiful (B&B) spoilers for the week of December 11-15 tease that we’ll see some shockers and shakeups. First, Brooke (Katherine Kelly Lang) will unsuccessfully attempt to make peace between Thorne (Ingo Rademacher) and Ridge (Thorsten Kaye). Instead, their rivalry will intensify as they make major plays for Brooke’s heart.

Nicole (Reign Edwards) will grow suspicious when she spots Brooke and Thorne in a warm embrace. She’ll share the news with Maya (Karla Mosley) and wonder how much she’s missed. They’ll ponder whether Brooke’s going to choose a future with Ridge or Thorne.

Thorne will insist that Brooke can’t marry Ridge. He’ll think if Brooke intends to marry someone, it should be him. The Bold and the Beautiful spoilers say Thorne will plant a steamy kiss on Brooke. She’ll enjoy it, but not enough to bail on Thorne’s brother. Despite his mistakes, Brooke has slowly fallen for Ridge again. It’s going to take more than one lip lock to change her mind.

Meanwhile, Ridge will recruit Quinn (Rena Sofer) for a special task. He’ll ask her to design the most gorgeous engagement ring she can dream up. It’s a little risky to rely on Quinn for this. After all, she’s the one Ridge cheated with! Nevertheless, Ridge will hope the end result will be worth it to Brooke. If it’s exquisite enough, Brooke probably won’t care.

Later, Ridge will get down on one knee and present the ring to Brooke. He’ll promise that she’s the love of his life and he would never do anything to hurt her again. Ridge will beg Brooke to be his bride and she’ll happily agree. Thorne isn’t going to be happy when he receives updates. He’ll do whatever he can to stop this wedding in the coming weeks.

Other Bold and the Beautiful spoilers say Liam (Scott Clifton) will grill Steffy (Jacqueline MacInnes Wood) about her lies. He won’t understand why she deceived him about staying at the guesthouse. Liam will feel guilty for interrogating Steffy after her bogus explanation. He’ll add to Steffy’s remorse, but they’ll both have other matters to deal with soon.

B&B spoilers state that Steffy will face a baby bomb. Once she gets confirmation on her pregnancy, Steffy will have to deal with a paternity mystery. The stress of all this is sure to weigh on her, but Liam will distract Steffy with a sex session. He’ll definitely be on cloud nine over their impending bundle of joy.

It looks like some exciting episodes are on the way. We’ll keep you posted as other B&B details emerge. Stay tuned to the CBS soap and don’t forget to check CDL often for the latest Bold and the Beautiful spoilers, updates and news.